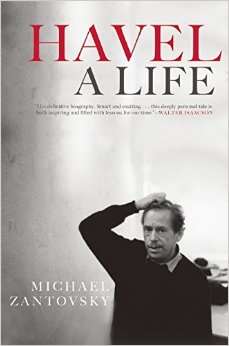 Václav Havel: Disturber of the Peace

The life of Václav Havel had all the makings of a fairy tale. The son of a wealthy property owner dispossessed of his holdings by the Czechoslovak communist regime, Havel (1936-2011) was denied higher education on account of his bourgeois upbringing. Not to be discouraged, he found his place in Prague’s mushrooming bohemian theater scene, where he made friends with long-haired poets, rebellious rock musicians and other outcasts from the country’s official cultural institutions. Penning subversive plays and essays, he soon emerged as the government’s most articulate and fearless critic—a role that earned him multiple prison stints under pitiless conditions that nearly killed him. With the Iron Curtain collapsing behind him, he hesitantly stepped out onto the political stage to lead a revolution so peaceful it was called velvet. He then became president by acclamation of a newly free and independent Czechoslovakia. And they all lived happily ever after.

However unlikely Havel’s story might have been, Michael Zantovsky, the late leader’s longtime collaborator and friend, writes in his intimate new biography that the journey was neither “miraculous” nor “accidental.” It was, rather, the product of a man preternaturally conscientious and concerned for the moral health of society. From a young age, when he etched drawings of a “Goodyworks” factory, which would employ 90,000 people for the sole purpose of producing goodness, to his last years, when he made the cause of imprisoned dissidents in far-flung locales his own, Havel displayed a genuine concern for the lives of others that is unrivaled among politicians.
Havel’s personal and political philosophy can be summed up in a phrase from his 1978 essay “The Power of the Powerless”: “living within the truth.” The world imposes great burdens on men, Havel argued, the first of which is a collective responsibility to be honest about the society they inhabit. In Havel’s political context, “living within the truth” meant speaking plainly about an inhuman political system—communism—and the lies and humiliating routines it forced its subjects to tell and endure. The bravest testament to this credo was Charter 77, a public appeal to the regime to respect the human rights it claimed to uphold. Havel was one of several co-authors and its main spokesman.

What drove Havel and others to sign the document was the persecution of a rock band, the Plastic People of the Universe, whose members were accused of “disturbing the peace.” Havel, who would cheekily adopt that malediction as the title for one of his books, soon followed the band to jail for similar offenses against the state. Imprisoned from 1979 to 1983, Havel was denied medical attention and endured great physical pain for his thought crimes. But the communists could not break him, and he refused an offer of early release in exchange for leaving the country. The greatest anguish the future president suffered at the hands of the sclerotic regime, which, in Mr. Zantovsky’s apt phrasing, “elevated oblivion to a method,” was the suppression of his ability to publish and speak freely.

Unlike many other political prisoners, for whom captivity bred rage and resentment, Havel exhibited a near-religious capacity for absolution. As president he opposed lustration—the wholesale purge of former communist officials from government jobs—and apologized to Germany for the postwar expulsion of some three million German civilians from Czechoslovakia. Neither stand earned him much admiration from his fellow Czechs. For a man who wrote so passionately about evil, he abhorred confrontation. He “always strove towards the form of a dialogue, in which he went out of his way to try to understand rather than to demonize the motives of the other side,” writes Mr. Zantovsky.

Yet for all his moral asceticism, Havel was no woolly-headed pacifist. A man “made in the sixties more than by the sixties,” as Mr. Zantovsky puts it, he took some inspiration from the various student protest movements of the era, but was puzzled by their naïveté about a political system that was crushing freedom in his homeland, and ultimately found himself, as Mr. Zantovsky puts it, “repelled by their mindless violence, wanton destruction, and fuddled brains.” One of Havel’s best essays, “Anatomy of a Reticence,” published in 1985 and often overlooked by his latter-day liberal admirers, is a gentle scolding of Cold War-era “peace” movements, which, he argued, had surrendered their claims to seriousness by calling for unilateral disarmament in the face of relentless Soviet aggression.

As Czech president, Havel was a supporter of Western military intervention both in the Balkans and then, more controversially, against Saddam Hussein in 2003. At home and abroad, Havel was moved by the same humanitarian impulse: “Our indifference toward others can after all result in only one thing: the indifference of others towards us,” he said in 1993. This is what Mr. Zantovsky dubs the “Havel Doctrine” and it is rooted in Czechoslovakia’s history of being the victim of foreign invasion and occupation. “Our own historical experience,” Havel said in 1999 on the eve of NATO intervention in Kosovo, “has taught us that evil must be confronted rather than appeased.” The author hesitates to label Havel’s worldview “neoconservative,” and, at least as far as domestic politics are concerned, he is right: On most social and economic issues Havel was decidedly left of center. But Havel personally understood the role of evil in international relations and looked to America as its natural foe.

Though a splendid remembrance of Havel, this book cannot, by nature of its provenance, qualify as a definitive biography. The author, who worked as Havel’s first presidential spokesman and now serves as Czech ambassador to the Court of St. James, doesn’t pretend to be an objective narrator: He is the man, after all, who carried Havel’s bags as he left prison. The drawbacks are obvious, but it does mean that Mr. Zantovsky was able to glean intensely personal observations from his subject’s closest friends. We also get the sort of casual, affectionate descriptions of the man (“a rather well-fed piglet” in his 30s, who, by the late 1960s, transformed into “a dude”) that a more dispassionate (and boring) book would have omitted.

Still, Mr. Zantovsky doesn’t shy away from the more unflattering aspects of Havel’s life, not the least his tomcatting, totally unremarkable among Prague’s intellectual set, for whom adultery was something of an art. (This might also, the author knowingly hints, have accounted somewhat for Havel’s kinship with Bill Clinton ). While he considered his wife, Olga, “indispensable,” and she him, Havel was far from faithful. As Olga lay dying of cancer, Havel took up with a significantly younger woman who would soon become his second wife.

As with many world-historical figures, Havel was too good for the country he led, a circumstance made all the more apparent by the Czech Republic’s current crop of unscrupulous and corrupt politicians who have abandoned the values he championed. Yet some of the very attributes that elevated him to international renown became weaknesses once he entered the Prague castle. He cringed at the actual practice of politics, shying away, for instance, from using his bully pulpit to oppose the peaceful dissolution of Czechoslovakia.

While Havel spoke out presciently against Russian President Vladimir Putin ’s repression and the threat he posed to a Europe whole and free, the Czech Republic’s current president says he sees no evidence that Russia invaded Ukraine and, last month, delivered a drunken rant ridiculing Russian political prisoners. Though a crowd of Czechs pelted him with tomatoes at a 25th anniversary celebration of the Velvet Revolution three weeks ago, the stirring moral vision that Havel articulated has depressingly few advocates in Prague today.

“I am too polite to be a good dissident,” Havel once acknowledged. As with so many things he wrote and said, this humble admission, however unwittingly, lived up to his exhortation of living within the truth. Havel wasn’t a good dissident. He was a great one.