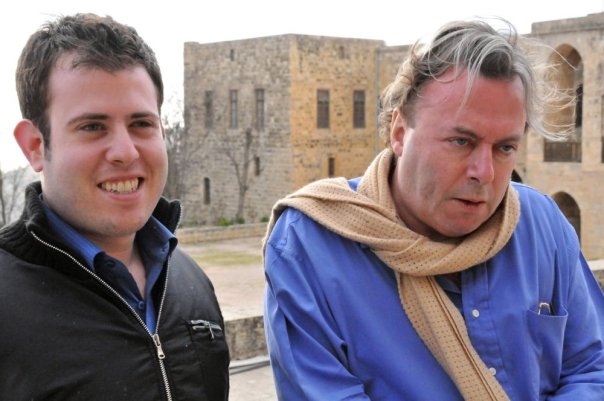 My memories of Christopher Hitchens

In February 2009, I attended a Hezbollah rally in Beirut with Christopher Hitchens. You could not have had better company with whom to witness the martial pieties of Lebanon’s “Party of God.” The “Shiite Muslim mega-Church,” as Christopher would later describe it, had been divided in two, men separate from women, the latter shrouded in black. At the back of the hall, a giant poster depicted a nuclear mushroom cloud composed of Arabic letters, helpfully translated on the side as reading, “Oh Zionists, if you want this type of war, SO BE IT.” Playing before us on a giant movie screen were alternating images of guerilla fighters with rocket launchers and their intended target, Tel Aviv, in flames. Throughout the evening, the only three words we non-Arabic speakers understood were shahid (martyr), yahud (Jew), and jihad (jihad).
It was at this point that Christopher leaned in to me and said, faintly above a whisper, “You’re looking especially Jewish this evening.”
Thus was my introduction to staring down violent religious fanaticism. Counterintelligence and military readiness are of course necessary components to any defensive strategy, but wit is a requirement as well, and no one better exemplified the happy warrior attitude than Christopher, who died Thursday night at the age of 62. He was living evidence of the need for strong doses of courage and humor in the face of authoritarianism, which, in whatever guise, whether religious or secular, is always drab and oppressive. A few days earlier, literally hours after we had stepped off the plane at Rafik Hariri International Airport, Christopher got into a violent scuffle while attempting to write “Fuck Off” on a sign belonging to a fascist, Syrian-backed political faction. Halfway through completing his graffito, a gang of men emerged and began to rough him up. Had Christopher not been with two other journalists, who helped him manage an artful escape, he might have starred in a beheading video.
At the hotel later that evening, I encountered Christopher at—where else?—the lobby bar. He was limping and bore some visible scratches on his face. “What possessed you to deface a political sign in Beirut, of all cities?” I asked, incredulously. “I have a rule regarding fascist insignia, my dear boy,” he replied. “It must be taken down.”
Christopher is largely being commemorated for the things he hated—religion, Saddam Hussein, Bill Clinton—and he was certainly the best takedown artist in the business. But I will most remember him for being uproariously funny. Last year, I interviewed him for a gay magazine about two same-sex trysts he claimed to have had as an Oxford student with future ministers in Margaret Thatcher’s cabinet. “I guess I should say that screwing the Tories is an across-the-board thing with me,” he said. Aside from nasty limericks, literally dozens, if not hundreds of which he had managed to store in his memory, Christopher specialized in long, drawn-out jokes. Sometimes, he would build up with 20 minutes of exposition before delivering the gag. No subject was too sacred. I don’t recall ever laughing harder than after Christopher delivered the unprintable punchline to a yarn about Robert Kennedy’s last words on the floor of the Ambassador Hotel.
A friendship with Christopher was not just a friendship. It was an education. Whenever I met with him, I would always end up whipping out a notebook to record his observations, book recommendations, or obscure articles that had been published decades ago. As a writer, there was no better mentor. He was exacting to a fault, aesthetically and morally. When I once concluded an article with the phrase “anytime soon,” he scolded me for what, unbeknownst to me, was a cliché (“At least you read to the end of the piece,” I responded. And it’s true: Christopher read everything). Similarly, he had no time for language or talk that obscured a subject’s true nature, particularly if the subject was deserving of a strong word like “evil,” “faker,” or “zealot,” which Christopher used generously (but never inappropriately). Milquetoast language would simply not do. You always knew, he told me, that something idiotic was going to follow forth from a sentence that began with “Saddam was a bad guy, but … .”
I would occasionally have to pinch myself as a reminder that I was in the presence of the Orwell of our age, and that he was voluntarily spending his time to banter with a twenty-something journalist. But his friendship was never a favor; if Christopher ever got bored with someone, you knew it, and as the countless obituaries published since his death attest, his friendships were wide and deep. Perhaps Christopher’s greatest trait was his social egalitarianism; he was generally interested in what “regular” people, many of them much younger, and all of them less knowledgeable and experienced than he, had to say. Christopher could have, if he chose, spent every waking hour with the circle of literary luminaries who shared his level of fame and erudition—Martin Amis, Ian McEwan, Salman Rushdie—or with the celebrities like Sean Penn who also called him a friend. But it was not unusual to spend an evening at Christopher’s house with any one of these grand figures, along with a congressional aide, an undiscovered author, and a human rights activist to boot.
In the spring of 2010, Christopher had received a terminal diagnosis, and while his outliving the year period in which the vast majority of esophageal cancer sufferers die brought his friends some hope, we knew the end was close. The full impact of Christopher’s passing will hit me soon, and then repeatedly thereafter and forever, the next and every time some bloviating cleric, anti-American radical, or apologist for tyranny opens their maw.