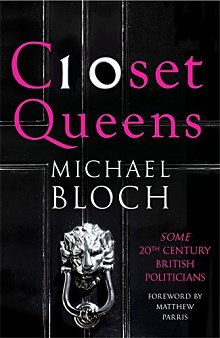 CLOSET QUEENS
By Michael Bloch
Little, Brown, e-book, $21.99
Several years ago, I found myself at a dinner party hosted by Cambridge University’s Adonian Society. The all-male Adonians, as their name impishly suggests, are a select group of undergraduates and their faculty admirers, along with hangers-on from the British elite. The setting was a cavernous dining hall straight out of “Harry Potter,” the dress code was black tie and the food dreadfully English. The conversation, though, was pure camp. As the assembled students, dons, viscounts and stragglers rose to toast the Queen, a senior Liberal Democrat sitting next to me surveyed the room and murmured: “Which one?”
Such blithe amusement characterizes Michael Bloch’s “Closet Queens,” an examination of male homosexuality in 20th-century British political life. Reading it, one might come to the conclusion that nearly every man who occupied the House of Commons in the past century was homosexual or, at the very least, “not straightforwardly heterosexual.”
The book is organized in rough chronological order, each chapter focusing on a pair or more of individuals whose sexuality serves as a means to explore the attitudes of their day. Mr. Bloch doesn’t reveal much more than what is already known about those figures whose gayness is widely acknowledged, like Liberal leader Jeremy Thorpe (accused of conspiring to have his male ex-lover shot for fear he’d be outed) and Labor MP Tom Driberg (whose insatiable sexual appetite and communist fellow-traveling inspired Winston Churchill to label him “the sort of person who gives sodomy a bad name”).
Mr. Bloch presents a mildly convincing case that the late-19th-century Prime Minister Archibald Primrose was gay. The alleged queerness of the 1970s Prime Minister Ted Heath, who was likely asexual, rests upon the conflation of bachelorhood and homosexuality. (In recent weeks, Heath’s reputation has suffered thanks to another common conflation, that of homosexuality and pedophilia, as he has posthumously become the latest target of Britain’s episodic child sex-abuse hysteria.) Likewise, Mr. Bloch is left to pure speculation when it comes to figures like early-20th-century Prime Minister Arthur Balfour, Horatio Kitchener (whose mustachioed face famously graced World War I-era recruitment posters) and 1930s War Secretary Leslie Hore-Belisha.
Not even Churchill is spared conjecture that he might have had a “homosexual outlook,” the evidence being his lack of interest in women as dining companions and his succession of handsome male aides. Though the author concludes that the former prime minister “was surely a virtual stranger to physical homosexuality,” Churchill had a more enlightened attitude than most men of his era. Hearing that a minister had been caught frolicking with a guardsman in St. James’s Park, Churchill is said to have replied, “On the coldest night of the year? It makes you proud to be British.”
That gay politicians were (and continue) to be found in far greater numbers in the ranks of the Conservative Party may come as a surprise to American readers. Here, the gay-rights movement emerged out of the 1960s counterculture. In Britain, homosexuality was long associated with the aristocratic elite and its all-male institutions and was seen by many left-wing politicians as an epicene vice that could only corrupt the working class.
Any historical endeavor concerning homosexuality confronts a central problem: the lack of evidence. In an era when sexual acts between men were illegal (a prohibition that wasn’t repealed until 1967), most of those who expressed homosexual longing, whether physical or purely emotional, took pains to hide it. More than a few of Mr. Bloch’s subjects, such as World War II Minister of Information Brendan Bracken and Kitchener, destroyed their personal papers.
That doesn’t stop Mr. Bloch from taking liberties in identifying several men as “closet queens,” often relying on negative stereotypes to do so. “Narcissistic,” “exhibitionistic” and “emotional” are all telltale signs of poofery, according to the author, along with, of course, a strong attachment to one’s mother. In several cases his only evidence is a late marriage. He also uses words to describe homosexuality—“proclivities,” “tastes”—that emphasize his own uncertainly about whether or not these men felt and behaved the way he said they did.
Advertisement
Mr. Bloch has a thesis about why gay men have been attracted to politics, and it’s what elevates his book beyond mere gossip. Closetedness, he argues, breeds a set of skills amenable to governing, namely, quick-wittedness, the ability to dissemble, “a talent for intrigue and subterfuge” and a higher tolerance for risk taking. These traits are indeed shared by many of the individuals Mr. Bloch examines, and they go some way to explaining why a particular type of gay man, in a particular era, might have gained an aptitude for politics.
But in his celebration of such savvy attributes, the author doesn’t come close to adequately addressing the downsides of the horrible circumstances that generate them. The closet is a destructive place, not only to the individual trapped inside but to those around him. The deeper question of motivation—namely, what stirred these men to public service in a society that rejected their nature—eludes Mr. Bloch.
Given the countless individuals (the computer pioneer Alan Turing being the most prominent) whose lives were ruined by Britain’s antigay laws, the lighthearted tone of “Closet Queens” unsettles. At times, it reads like an extended skit from “ Monty Python’s Flying Circus,” with names like Sir Dingle Foot and Gottfried von Cramm flitting across the page. That scarcely any of the stories contained here end in tragedy is a testament to the protection that the British establishment often affords those of the right social class. Though “few would advocate a return to the old days” when homosexuality was illegal, Mr. Bloch coolly asserts, such strictures nevertheless “tended to foster qualities which may be missed in future.”
This is selective nostalgia masquerading as historiography. It’s an unmitigated achievement that we live in an era where far fewer cower behind the closet door.