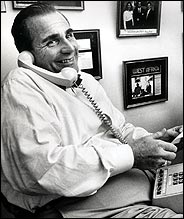 Despots and the lobbyists who love them.

Joe Szlavik remembers the moment when he began to suspect that his work on behalf of the Kingdom of Swaziland was an enormous waste of time. It was 2006, and Szlavik–a lobbyist who had represented foreign governments ranging from Burundi to Gabon to Uganda, as well as the late Benazir Bhutto of Pakistan–was helping Swaziland, a tiny, landlocked monarchy sandwiched between South Africa and Mozambique, navigate the tricky waters of Washington politics. Swaziland’s King Mswati III (“a great guy, one-on-one,” says Szlavik, but “real green behind the ears”) and his foreign minister (“crusty, old guard, and incompetent”) were in town, and the lobbyist met them at the stately Willard InterContinental Hotel. Szlavik, whose firm was pulling in $20,000 per month from its Swaziland account, had some difficult news to deliver about a certain Swazi custom. “You have this reed dance, with these virgins,” he explained to me recently. Szlavik’s message to his client was simple. “Listen to me,” he implored the king. “You got to stop this.”
The reed dance, or “umhlanga” in the Swati language, is probably Swaziland’s best-known tradition. Every August or September, thousands of girls congregate at Ludzidzini, the King’s royal residence, for an eight-day festival of music, dancing, and singing, officially in honor of the king’s mother. On the seventh day, the young women–all topless–don skirts made of freshly cut reeds and perform personally for the king, who may decide to choose one of them as a bride. The reed dance had recently been a source of domestic political embarrassment for Mswati. In 2001, troubled by his country’s high HIV rate (at least one-third of the population is believed to be infected), Mswati had issued a decree that no girl below the age of 18 would be allowed to have sex for five years. Then, in 2004, at the annual reed dance, Mswati chose a twelfth wife. The problem: She was 16 (and a former Miss Teen Swaziland finalist to boot), meaning that the king was now technically in violation of his own law.
Soon enough, the sex ban was lifted. The reed dance, however, continued–and, back in Washington, it was causing Szlavik no end of problems. Earlier, he had brought the king and Swazi ambassador to meet with Chris Smith, a socially conservative Republican representative from New Jersey and then chairman of the House Foreign Affairs Subcommittee on Africa. Smith “understood there was a traditional part to the dance but in light of the gravity of the HIV situation [thought] maybe they could put tradition aside,” Szlavik recalls.
Such arguments were lost on King Mswati. “Look Joe, I understand the whole thing with the West, but we look at breasts like you look at feet,” the monarch told him. It wasn’t an unreasonable point. In some rural African cultures, women refraining from wearing tops is about as common as U.S. postal workers wearing shorts in the summer. But try explaining that to a conservative Republican congressman.
“I like breasts personally,” Szlavik, a fast-talking cheerful man of about 40, told the king. “But, you know, there’s a sexual undertone to it clearly.”
In fact, Szlavik had good reason to think the Swazis might take his advice on reforming the reed dance. Since he began working for the Swazi government the year before, he had helped convince them to sign Article 98 of the Rome Statute–a clause that ensures legal immunity for U.S. government officials (including soldiers) serving abroad–and persuaded the king, Africa’s last absolute monarch, to suspend a 1973 decree issued by his father banning political parties. Reforming the reed dance, however, was a step too far.

It’s easy to dismiss someone like Szlavik as a comic figure. After all, lobbying for the King of Swaziland doesn’t sound like the weightiest job in Washington. But, comic or not, lobbying for dictatorships actually has a long history–and, apparently, a thriving present as well. That, at least, is the conclusion you’d have to reach from surveying the members of the McCain campaign, which, in recent months, has seemed to be saturated with men giving advice to dubious foreign leaders. In May, Doug Goodyear quit his position as Republican National Convention chair after Newsweek revealed that his DCI Group had lobbied on behalf of the Burmese military junta for $348,000 in 2002. That same month, Thomas Loeffler, a national co-chairman of the McCain campaign, resigned after The New York Sun reported that he was a registered lobbyist for Saudi Arabia. McCain’s original choice for the convention job, Paul Manafort, also got his hands dirty working for brutal foreign clients, particularly the Philippines’ Ferdinand Marcos and Vladimir Putin ally Viktor Yanukovich of Ukraine. His firm, Davis Manafort, which he co-directed with McCain campaign manager Rick Davis, had, at various times, represented Mobutu Sese Seko of Zaire and Angolan rebel leader Jonas Savimbi, two men infamous for their sadism.
Under the Foreign Agents Registration Act (FARA) of 1938, anyone who “acts at the order, request, or under the direction or control of a foreign principal” must register with the Justice Department. Congress passed FARA in response to Nazi Germany’s attempts, through hired hands, to propagandize in the United States. If shilling for odious foreign governments shouldn’t be illegal, lawmakers figured, it could at least be a matter of public record. In addition to those flacking for foreign governments, individuals representing foreign political parties, leaders, and state-owned entities (like tourism boards or nationalized industries) must also register.
Some of the countries that manage to find representation in Washington make Swaziland look like a liberal paradise. Mississippi governor Haley Barbour’s old lobbying firm, Barbour Griffith & Rogers, has represented Equatorial Guinea, a totalitarian state in West Africa. Former Congressional Black Caucus chairman Mervyn Dymally briefly represented Mauritania, a country where slavery is still practiced. And topping them all for sheer gall was William Keyes, a former Reagan White House staffer, who lobbied for apartheid South Africa in the 1980s. Keyes, no relation to Alan, is black.
What could possibly drive lobbyists to represent such awful governments? The obvious answer is that the money is sometimes quite good. In March, for instance, ex-Louisiana Republican Representative Bob Livingston’s firm signed a contract with Muammar Qaddafi’s Libya worth $2.4 million. But that can’t be the only explanation, as tin-pot dictatorships are notoriously fickle when it comes to paying up. “They’re very unreliable clients,” says George Denison, a former Ford administration staffer who has lobbied for various foreign governments, some of them pretty low on Freedom House’s annual ranking of worldwide liberty. “Frequently, they pay you once, and that’s the last time.” In Szlavik’s case, the reed dance may have been a huge headache, but so was the country’s delinquency in payment. “They were late; they didn’t pay their bills on time,” he complains.
So, if it isn’t money that motivates these lobbyists, what is it? True, lobbying for dictators sounds like a caricature of the lobbying profession as a whole–people with no morals shilling for the world’s least savory people. But it isn’t that simple. In fact, there may be a darker psychological explanation for why Americans would lobby for such awful governments.

There is a handful of dictatorships that nobody represents. Since Kloberg’s arrangement with the government of Hafez Assad ended in 1994, no one has represented Syria. And no one has ever registered to represent North Korea (though this isn’t for lack of trying; according to his New York Times obituary, Kloberg courted Kim Jong Il, but to no avail).
As tempting as it may be to work on behalf of dictatorships, some Washington lobbyists can’t stomach the moral dilemma. One former White House staffer, now working as a freelance consultant, told me that he was recently asked through an intermediary if he would advise the government of Yemen. He had one question: “Where are they cooperating on the war on terror?” He asked a former colleague in the Bush administration who “was less than confident that the Yemenites were completely good actors,” which led him to reject the offer. The lobbyist who complained that dictators never listen says that it isn’t always lofty moral concerns that prevent his peers from representing dictatorships, but the inherently futile nature of the task. “I can’t represent these people because they’re so bad that going out there and putting lipstick on a pig isn’t going to work,” he says.
And as for those who do give it a try? More often than not, they seem to end up disappointed. That’s what happened to Szlavik. Having failed to negotiate reforms to the reed dance, he nevertheless soldiered on with the Swaziland account. In late 2007, he secured the (literally) royal treatment for King Mswati and his entourage at a Kennedy Center performance by Roberta Flack. The center provided the trustees box and arranged an introduction from its executive director, all for the king’s pleasure. The U.S. government provided Secret Service protection. On the evening of the performance, however, the king was a no-show. “The foreign minister sabotaged it. … I’m not the brightest bulb on the block, but I’m not going to sit around doing this shit anymore,” Szlavik remembers thinking. Rick Sincere, Szlavik’s partner, says that “what finally caused us to break the relationship [with the Swazis] was that they weren’t paying attention to what we were doing for them. We were giving them advice and they wouldn’t follow it. They pay us for our expertise and then they ignore it.” As Roberta Flack might put it, where is the love?