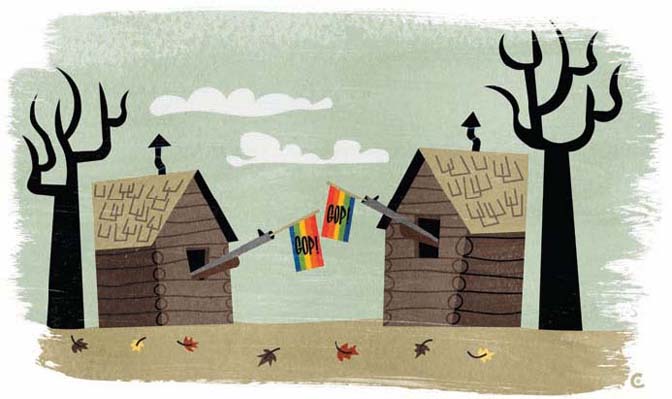 Battle of the Homocons

Gay Republicans can’t get along–both of them.

It’s a sunny Friday afternoon in April, and Frank Ricchiazzi is addressing the annual convention of the Log Cabin Republicans at a hotel ballroom in downtown Washington. He is speaking about betrayal. A squat, goateed Vietnam vet from California, Ricchiazzi helped found the gay GOP activist group, and, among Log Cabin members, he is known as “the Godfather.” He begins his speech by reminiscing about the organization’s early days in the late 1970s. At the time, it had only two chapters, in San Francisco and Orange County, and “we didn’t agree on anything,” Ricchiazzi recalls. Nevertheless, gay Republicans were “la famiglia” and realized that, “so long as the family stayed together … we would prosper.”
Everyone in the room knows what Ricchiazzi is alluding to. Days earlier, two former Log Cabin employees had announced the launch of a new gay conservative organization, GOProud (pronounced “Go-Proud”). Already, it had received glowing endorsements from conservative activist Grover Norquist and Wall Street Journal columnist William McGurn. The Godfather does not seem pleased by this development. “We’re a family,” he intones. “If you’ve got problems, you come to the family and talk about them.” His voice rises as he continues: “Anybody who breaks away from the family”–but, before he can take this line of thought any further, his audience cuts him off with applause. “Whatever garbage is out there, it’s for going to the dump!” he concludes, in colorful, if not completely coherent, fashion.
Ricchiazzi’s “family” is in trouble, and has been for a while. In January, the Washington Bladerevealed that the Log Cabin Republicans were $100,000 in debt. A month later, another Bladestory reported that a substantial chunk of the organization’s budget was coming from the Gill Action Fund, an organization founded by multimillionaire gay activist Tim Gill that mostly donates to Democrats. This led some Republicans to grumble that the group was under the control of liberals. One former board member alleged to Newsweek that Gill “bought and paid for” the organization’s decision not to endorse President Bush in 2004. Meanwhile, the group has yet to find a replacement for its most recent executive director, Patrick Sammon, who departed in January. It is currently being run by part-time staff.
And, now, on top of everything, a new organization has emerged that threatens to splinter an already small subset of the population–gay GOP activists–even further. Is there really room in Washington for two gay Republican groups?

“They spend all their time attacking Republicans!” Christopher Barron complains to me over lunch, bemoaning what he sees as Log Cabin’s increasingly liberal tilt. Barron joined Log Cabin as its political director in 2004 and, for the last three years, advised the group as a consultant. Now, he and former Log Cabin policy director Jimmy LaSalvia are the brains behind GOProud.
Barron and LaSalvia have no shortage of specific complaints about their former organization, but most are reducible to a simple allegation: The Log Cabin Republicans aren’t sufficientlyRepublican. For instance, the duo argues that hate crimes and employment discrimination, two items high on Log Cabin’s agenda, are not as important to most gay conservatives as standard Republican fare like estate-tax repeal and Social Security privatization–issues that they say particularly affect gay couples because of the lack of partnership recognition in many states and by the federal government. Barron, who attends both the annual Conservative Political Action Conference and Norquist’s famous Wednesday morning meetings of movement conservative leaders, also lambastes Log Cabin for not being supportive enough of the GOP’s embattled, relatively gay-friendly chairman, Michael Steele (“If he doesn’t last, we’re in deep shit,” Barron says). And he complains that Log Cabin’s “agenda looks like it was cut and pasted” from the website of the (left-leaning) Human Rights Campaign, the country’s leading gay rights organization. At the press conference announcing GOProud’s launch–attended by about ten people, two of whom work for Log Cabin–Barron says that the goal of the organization is to “restore conservative majorities in 2010 and bring a conservative to the White House in 2012.”
Not surprisingly, Log Cabin defenders see things differently. On the question of whether the group too often attacks Republicans, a Log Cabin insider points out that the organization has endorsed a handful of GOP congressmen who supported the Federal Marriage Amendment but who later came out in favor of the Employment Non-Discrimination Act. (Log Cabin also endorsed John McCain in the general election.) Plus, GOProud’s conciliatory approach toward the party may ultimately undermine the work of making it more gay-friendly. The same insider fears that “there’s a danger” in GOProud being “used” by “Republicans who aren’t very good, who will say, ‘Boy, the gays like us.'” Log Cabin partisans may be too polite to put it this way, but, in essence, the argument is that GOProud could become a group of Uncle Toms.
Their central complaint against GOProud, however, is that the new organization has less to do with substance than with sour grapes. That’s because, after Sammon announced his departure as head of the Log Cabin Republicans late last year, both Barron and LaSalvia applied for his job. The Log Cabin board rejected their bids early in the process. “It’s all personal,” the Log Cabin insider says. “It’s one hundred percent based on Jimmy and Chris trying to get back at the organization because of the way they’d been treated.” To that criticism, Barron responds that it’s the “mission” of GOProud that’s driving them. “Neither Jimmy nor I relish the work,” he says. “But we can’t continue to sit by and hope someday that Log Cabin will get its act together.”
There are no signs of this quarrel at Log Cabin’s Saturday gala dinner. In the back of the ballroom, a tattooed DJ with bulging muscles spins pulsating disco. One day after having delivered his heated denunciation of traitors–and after his organization had scored a major coup when McCain’s senior campaign strategist, Steve Schmidt, delivered a widely covered speech endorsing gay marriage–Ricchiazzi takes the floor again, this time to lead the room in a recitation of the Pledge of Allegiance. Later that night, Meghan McCain, who has recently emerged as an outspoken proponent of gay rights, delivers the convention’s keynote address. She has brought her hair stylist, Josh Rupley, to the event, and announces that he is “a proud new member of the Log Cabin Republicans.” In the Intra-Homocon War of 2009, winning Meghan McCain’s hairdresser has to count for something.