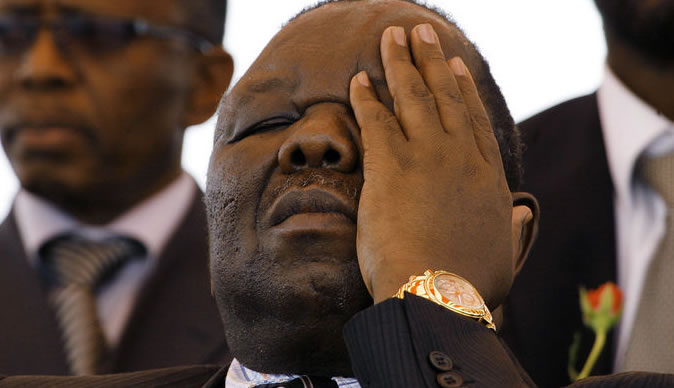 Morgan Tsvangirai, the prime minister of Zimbabwe and the leader of its democratic opposition, has endured countless indignities at the hands of President Robert Mugabe. In 1997, thugs tried to throw him from the window of his 10th floor office. In 2002 and 2008, he had elections stolen from him and his party, the Movement for Democratic Change. After that most recent ballot, he had to hide at the Dutch Embassy in Harare for fear of his life. A year later his wife died in a mysterious car crash that many assume was the regime’s dirty work.
Add to this litany the news that he may be tried for treason. Mr. Mugabe has already gone after him three times with trumped-up charges, but this time Mr. Tsvangirai will have someone additional to blame: Julian Assange of WikiLeaks.
Last week, the crusading “anti-secrecy” website released a diplomatic cable from the U.S. Embassy in Harare. It describes a 2009 meeting between Mr. Tsvangirai and diplomats from the U.S. and Europe, both of which have imposed sanctions on the Zimbabwean regime.
Since 2009, the two leaders have worked together in a fragile governing coalition. Though the unity government has made some progress—including replacing the worthless Zimbabwean currency with the U.S. dollar and South African rand—Mr. Mugabe still controls the “hard” ministries like the army, police force and security services.
In the conversation with Western ambassadors, Mr. Tsvangirai acknowledged the important role that sanctions have played in forcing concessions from Mr. Mugabe. But, as he noted to his American and European counterparts, his private support for the measures conflicts with his public opposition. He publicly opposes the sanctions because Mr. Mugabe has successfully mischaracterized them as an assault on regular citizens, even though they only target top regime officials with asset freezes and visa bans. (Western companies are permitted to do business in Zimbabwe and international food aid, when it isn’t blocked by the regime, flows freely).
As a result of the WikiLeaks revelations, Mr. Mugabe’s handpicked Attorney General, Johannes Tomana, this week formed a commission to determine whether Mr. Tsvangirai committed treason by working with foreign governments to impose and sustain sanctions. If found guilty, he could face the death penalty.
In June 2009, I heard Mr. Tsvangirai speak at the Council on Foreign Relations in Washington, D.C. At the time, he was visiting Western capitals to seek increased aid and a lessening of sanctions—the very ones that he later privately told European and American officials to maintain. Although he waved off concerns from the audience about Mr. Mugabe as “misgivings” that “arise out of history,” it was clear that his heart wasn’t in the appeal. Mr. Tsvangirai was trapped precariously between Western governments and the people who had repeatedly tried to murder him back home.
Which leads us back to WikiLeaks and Mr. Assange, who lacks any appreciation for the subtleties of international statecraft, many of which are not at all devious. If Mr. Assange were genuinely committed to democracy, as he claims, he would reveal the minutes of Mr. Mugabe’s war cabinet, or the private musings of the Chinese Politburo that has sustained the Zimbabwean dictator for over three decades.
Mr. Assange’s real mission is revealed by the deceptively edited video he released in April entitled “Collateral Murder,” which purported to show the deliberate killing of journalists by American helicopter pilots in Iraq. What the video didn’t make clear is that the journalists—whose cameras were mistaken for weapons—were standing among armed men. Mr. Assange’s priority is to push an anti-American agenda—innocent bystanders like Mr. Tsvangirai be damned.
In an interview last week with ABC News, Mr. Assange denied that his organization’s tactics have hurt any innocent people. “In our four-year publishing history there has never been a single report of any of our documents causing physical harm to any single person,” he asserted. It was a cynically crafted denial: No one, to our knowledge, has been physically harmed—yet. That doesn’t mean the numerous individuals whose names appear in the cables are safe. And it’s cold comfort to Morgan Tsvangirai, who may become just the first casualty of WikiLeaks’ collateral damage.