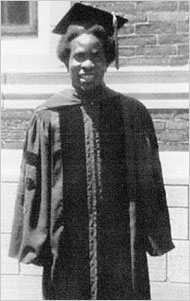 It’s not fair to use affirmative action against Clarence Thomas.

With the release of Supreme Court Justice Clarence Thomas’ memoir, “My Grandfather’s Son,” all of the old smears directed against him since his confirmation hearings 16 years ago are once again being trotted out.
That he’s “incompetent.” That he’s “not qualified.” That the only reason he was appointed is because he’s black. In other words, that he’s a product of affirmative action or, more precisely, an “affirmative action hire.”
Last week, for instance, liberal Washington Post columnist Eugene Robinson wrote: “I believe in affirmative action, but I have to acknowledge there are arguments against it. One of the more cogent is the presence of Justice Clarence Thomas on the U.S. Supreme Court.”
Robinson’s comment echoes many previous attacks. In 2000, for example, Newsweek columnist Anna Quindlen — another liberal who has written in support of affirmative action — declared that Thomas’ “judicial resume was mediocre; he was chosen because he was conservative and black, an affirmative action hire by an administration that eschewed affirmative action.”
Many liberal Democrats aren’t willing to say out loud what Robinson and Quindlen wrote so clearly. After all, they’re conditioned to defend racial preferences, which they insist do not promote “incompetent” or “unqualified” people. But that doesn’t mean they don’t think it. Even The American Prospect magazine, a liberal journal that sees its mission as “beating back the right wing,” ran an article two years ago calling Thomas the “most visible affirmative action hire in all the land, a token black nominee whose lack of qualifications was so painfully outed during his confirmation hearings.”
How can you support a policy of racial preferences and then attack one of its supposed beneficiaries as undeserving? This, ultimately, is the intrinsic hypocrisy of the Thomas bashers. They allege that he’s not competent and that the only reason he became a Supreme Court justice was because he’s black. And in so doing, they level the exact same arguments against Thomas that they castigate conservatives for making about affirmative action itself. But let’s face facts: A program that gives people with a certain skin color an advantage will invariably reward some who would otherwise not qualify.
This blatant intellectual inconsistency does not stop Thomas’ liberal critics from accusing him of hypocrisy — namely, for being the “most visible affirmative action hire in all the land” while simultaneously standing as its most prominent black opponent. By opposing racial preferences, liberals say, Thomas — who was accepted into Yale Law School via an affirmative action program — is denying others the very same benefits he received.
But as Thomas reveals in “My Grandfather’s Son,” his opposition to racial preferences is based on personal conscience and a genuine concern for its effects on black Americans, not selfish disregard for his racial brethren born out of self-loathing, as affirmative action advocates would have it. He writes that he keeps his Yale diploma tucked away in his basement with a 15-cent cigar sticker affixed to its frame. Why? In a “60 Minutes” interview, Thomas said “that degree meant one thing for whites and another thing for blacks. . . . It was discounted.”
This is one of the tragic legacies of racial preferences — that the achievements of black people in the professional world will always be suspect, and not just to blacks who benefit from such preferences. In the minds even of liberals, blacks will always be thought of as “affirmative action hires” no matter how bright or qualified they are.

It may be difficult for well-intentioned white liberals to understand the personal insecurity that affirmative action causes, and as a white person, I can only take someone like Thomas at his word when he writes about the shame he feels because of racial preferences. But as a gay man, I can certainly empathize, as I imagine I would feel exactly the same way if sexual orientation became a “plus factor” in a law school or employment application process. Factoring in a person’s immutable traits demeans them and robs them of their individuality.
Whether or not Thomas is qualified to be a Supreme Court justice, who are affirmative action advocates to smear him as an affirmative action hire? (Can you imagine a left-wing magazine like The American Prospect saying that about a liberal black judge? It would never happen.) But if they honestly believe Thomas is one, then they only have themselves to blame for a rotten system that privileges some people over others because of skin pigmentation.
From the day his Supreme Court nomination was announced by President George H.W. Bush, Thomas’ critics have personally and viciously attacked him as if he were an abstraction — representing everything they hate about minorities (whether women, gays or blacks) who do not subscribe to their liberal nostrums — and, in so doing, have sucked him of his humanity as an individual. If liberals want to live up to their self-purported principles of equality and free inquiry, they would do well to stop treating Clarence Thomas as the scapegoat for their political agendas and start treating him like a man.