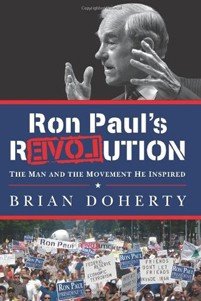 If there’s one thing that the 2012 campaign has taught us about Ron Paul, it’s that he is a bald-faced liar. Not just a run-of-the-mill liar like most politicians, but a liar so shameless that only the most slavish of devotees could maintain respect for him. Brian Doherty, a senior editor of Reason magazine and the author of a well-received book about the libertarian movement, is just such a follower. Unfortunately, what could have been a fascinating peek into the leader of a fringe political movement ends up being little more than a love letter to Paul that, like all love letters, exhibits a willful blindness toward the glaring defects in the object of the author’s affection.
The lies Doherty can’t bring himself to acknowledge, let alone criticize, concern the notorious newsletters that the libertarian guru Paul published from the late 1970s through 1996, the bulk of which I uncovered and exposed in a 2008 article for The New Republic. The full contents of these “bigot-grams,” as the Dallas Morning News referred to them, need not be fully rehearsed here, but needless to say they are replete with ugly statements about gays, blacks, and Jews, not to mention endorsements of a variety of quack scientific claims, support for the right-wing militia movement, and defenses of such loathsome individuals as David Duke, Marge Schott, and Bobby Fischer.
Paul’s acknowledgment of his involvement, or lack thereof, in the newsletters, evolved from a defense of their contents in 1996 to telling CNN in December of last year, “I’ve never read that stuff.” A former secretary of Paul’s told The Washington Post, however, that Paul “would proof” the newsletters, a claim seconded by another erstwhile aide. It is frankly inconceivable that Paul was unaware of what was being produced in his own name and to his massive personal enrichment.
Doherty has no interest at all in this controversy and in what it says about Ron Paul. Granted unprecedented access to the Texas congressman and his inner circle (including Lew Rockwell, the vituperative “paleolibertian” activist whom many suspect played a key role in the newsletters), Doherty appears to have asked no one in Paul-world about them. So blinded is he by ideological devotion to Paul’s smash-the-state agenda, Doherty doesn’t mind that the vessel is a highly compromised individual who, whatever his beliefs, is clearly willing to lie through his teeth rather than shed more light on his dark associations. When potential leads stare him right in the face, Doherty ignores them. He takes Paul’s impossible denials at face value and then goes out of his way to downplay the severity of the scandal, dismissively writing that, “the people ghostwriting Paul’s Survival Report newsletter indulged in some occasional mean and contemptuously jokey references to blacks.”
Consider Doherty’s mention of Paul’s association with Gary North, one of the original members of his congressional staff. Referring to North as “controversial,” Doherty reveals that he is a “Christian Reconstructionist” who advocates the death penalty for homosexuality and adultery. Wouldn’t you be interested to know why Ron Paul hired this man to work for him? Doherty appears not to care.
Doherty likewise writes, “In the early days of AIDS, Paul was rumored to actually favor some sort of forced quarantine of victims; Paul denied that vehemently.” Perhaps the reason why Paul was “rumored” to support such a quintessentially unlibertarian idea could be found in the newsletters that Doherty ignores, in which he scaremongers about the alleged casual transmission of HIV and declared that “we must also allow local school boards to ban AIDS carriers from the public schools.”
Writing of Paul’s obsessive musings about the Council on Foreign Relations, Doherty says that Paul “denied believing that they ‘ran the world’ in any movie-villain conspiratorial sense,” which is a rather low threshold for assessing the man’s political judgment. Doherty mentions only in passing Paul’s frequent and vocal warnings about the “North American Union,” the political merger of the U.S., Canada, and Mexico that exists only in the heads of Paul and his acolytes. Similarly Doherty is unbothered by Paul’s speaking before the John Birch Society (a group that William F. Buckley Jr. expelled from the conservative movement for being too right wing—in 1962), or his frequent guest appearances on the radio program of Alex Jones, a man who makes your average street corner Armageddon ranter sound sane.
If Paul’s warnings about fiscal crisis sound vaguely prescient, as Doherty argues, it’s because he’s been peddling the same shtick about impending financial doom for decades. For Paul, fascism is always around the corner. In 1983 he announced that “the final tragic consequence of the abuse of government power and currency destruction is war.” With civil strife apparently still on the horizon, he followed this up with the claim that “government growth is so much out of control that we are dangerously close to the point of becoming a totalitarian state—in spite of the superficially good times in which we currently live.” Several months later came the warning that “we are literally entering the last stage of a system that is destined to fail. The system must be replaced, and indeed, time is running out.” In 1989 one of his “predictions for the 1990s” was “The American Republic Will Be Replaced With Democratic Fascism.”
To best understand Paul and his followers, one should read, or reread, Richard Hofstadter’s The Paranoid Style in American Politics. The former Columbia University historian wrote, “We are all sufferers from history, but the paranoid is a double sufferer, since he is afflicted not only by the real world, with the rest of us, but by his fantasies as well.” This article was written in 1964, a dozen years before Ron Paul first entered Congress. But it does far better work explaining him than Brian Doherty’s hagiography.