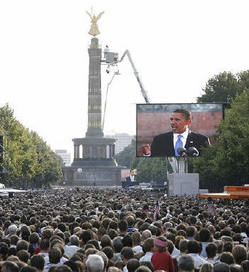 Pursuing the favour of global publics has not shown the results President Obama heralded; it may be making things worse.
Barack Obama entered the White House riding a wave of popularity around the world unparalleled in recent political history. His margin of victory among American voters in last November’s presidential election was 6 percentage points; outside the United States, however, Obama was favored over his Republican rival John McCain by huge majorities. Obama himself seized on the global attraction to his candidacy and in July 2008 took an unprecedented break from the campaign trail to embark on a seven-nation tour. Its ostensible purpose was to demonstrate his diplomatic bona fides to voters back home, but it was also meant to give a foretaste of the international goodwill America would enjoy under his presidency. The trip culminated in a speech before an enthusiastic, 200,000-strong crowd in Berlin in which Obama declared himself a “fellow citizen of the world.”
Obama’s dominant foreign-policy promise was that he would work to repair America’s “tarnished image” and improve its “moral stature” around the world, to which so much damage had been done by the two-term presidency of George W. Bush. In his speech at the Democratic National Convention in August 2008, Obama said that, if elected, he would “restore our moral standing so that America is once more the last, best hope for all who are called to the cause of freedom, who long for lives of peace, and who yearn for a better future.” This, his supporters insisted, was the foremost national priority.
More than a year later, we can see that this was not merely a rousing campaign trope. Rather, it has proved to be the animating principle of the president’s foreign-policy agenda. In late September, Obama stood up to address heads of state at the United Nations General Assembly. “I am well aware of the expectations that accompany my presidency around the world,” he began.

These expectations are not about me. Rather, they are rooted, I believe, in a discontent with a status quo that has allowed us to be increasingly defined by our differences, and outpaced by our problems. But they are also rooted in hope—the hope that real change is possible. . . . I took office at a time when many around the world had come to view America with skepticism and distrust. Part of this was due to misperceptions and misinformation about my country. Part of this was due to opposition to specific policies, and a belief that on certain critical issues, America has acted unilaterally, without regard for the interests of others. And this has fed an almost reflexive anti-Americanism, which too often has served as an excuse for collective inaction. . . . We must embrace a new era of engagement based on mutual interest and mutual respect, and our work must begin now.