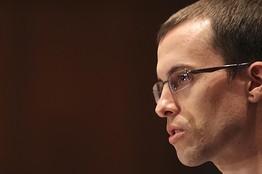 Imagine you are Shane Bauer, one of two American hikers released from Iranian captivity last week.
On July 31, 2009, you’re traversing a mountain trail in Iraqi Kurdistan, near the Iranian border. You’re with one of your best friends and your girlfriend. Suddenly a group of Iranian border guards capture you, and the next thing you know you’re in Tehran’s infamous Evin prison accused of “illegal entry” and “espionage.”
Your girlfriend is kept in solitary confinement and you can see her only for an hour each day. The Iranian government prevents you from contacting your family for almost a year, at which point they decide to let your mother visit you for two days at a Tehran hotel.
While your captors treat you humanely and provide three square meals a day, your Iranian co-prisoners aren’t so lucky. Every night you hear their screams. Evin is the world’s most notorious torture dungeon, where political dissidents (men and women) are routinely raped, beaten and subjected to all manner of physical and psychological abuse.
Ahmad Batebi, a student activist who spent 17 months in solitary confinement there, reports that guards kicked him in the teeth, dunked his head into a toilet “stopped up with feces,” and whipped his back and testicles with a cable. When he tried to sleep, they slashed his arms with a knife and rubbed salt in the wounds.
kirchick iran

As you sit in this hellhole, no less than the president of the United States takes up your cause, insisting that you “never worked for the United States government,” that you’re “simply open-minded and adventurous” and “represent the best of America and of the human spirit.”

Following two years of strenuous work on the part of committed American diplomats, you are freed on $500,000 bail, paid by the billionaire Sultan of Oman. And what is the first thing you say upon your release?
“Two years in prison is too long and we sincerely hope for the freedom of other political prisoners and other unjustly imprisoned people in America and Iran.
Mr. Bauer didn’t name any of the “political prisoners” allegedly held in America’s jails—because there aren’t any. So is this a case of Stockholm Syndrome? Perhaps, but Mr. Bauer likely came to his views while earning a degree in “Peace and Conflict Studies” at Berkeley, if not before. On a website calling for his release, a friend attests to his “strong critic[ism] of the US-led brutal war on Iraq and Israel’s ongoing violence against the Palestinian people.”
On Sunday, Mr. Bauer said that he opposes “U.S. policies toward Iran which perpetuate this hostility”—as if American belligerence, and not Iranian tyranny and terror, causes tension between the countries. Though he criticized Tehran’s “brutality,” he gave credence to his captors’ grievances when he said that “every time we complained about our conditions, the guards would immediately remind us of comparable conditions at Guantanamo”—as if the claims of a government that denies the Holocaust have any validity.
While neglecting to thank either President Obama or Secretary of State Hillary Clinton for helping secure his freedom, Mr. Bauer expressed gratitude toward Hugo Chávez, Sean Penn, Noam Chomsky and Yusuf Islam (formerly Cat Stevens).
Last year Mr. Chomsky wrote an “appeal to the Iranian leadership” on behalf of the captive hikers: “These young people represent a segment of the U.S. population that is critical of [U.S.] policies, and often actively opposed to them. Hence their detention is particularly distressing to all of us who are dedicated to shifting U.S. policy to one of mutual respect rather than domination.” In other words, it would have been different had Iran kidnapped three Republican state-school football players on summer vacation, as opposed to a trio of “social justice” activists committed to exposing the sins of America.
A website calling for Mr. Bauer’s release asked, “Why is Iran holding anti-war activists?” The answer eludes Mr. Bauer and his ilk for the same reason that they believe a moral equivalence exists between the Islamic Republic and America: Tehran does not care for international norms of behavior. A student of the Middle East, Mr. Bauer should know that his ordeal at the hands of the Iranian government is but an echo of the crime that inaugurated the Islamic Republic itself—the 1979 seizure of the American Embassy in Tehran and the holding of our diplomats hostage for 444 days.
The American justice system is far from perfect. But it is transparent, offers the right of appeal, and is routinely challenged by a free press and active civil society. Moreover, it doesn’t imprison people for their political beliefs.
One would think that two years in Evin prison would instill this basic knowledge in Shane Bauer, whose mind, if not his body, is still being held hostage.
Link