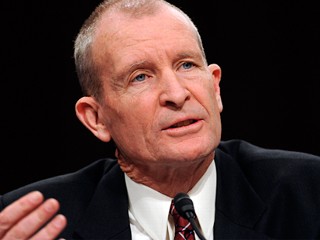 Can Dennis Blair save U.S. intelligence?

In the shadow of the intelligence failure that culminated with Umar Farouk Abdulmutallab lighting an explosive aboard a Detroit-bound flight, the titular head of the U.S. intelligence community was busy fighting another war. For months, in fact, Admiral Dennis C. Blair, the director of national intelligence (DNI), had been waging an epic bureaucratic offensive. His job had been created in the wake of September 11 to foster cooperation and accountability among the 16 agencies sifting through the mounds of inbound data about threats to U.S. interests. Turf wars, the job’s congressional creators theorized, had prevented spooks from the sort of sharing that would piece together plots. So a strong leader was needed to heal these rifts in the government.
Under Blair, however, these rifts have grown worse. His sworn bureaucratic foe is CIA chief Leon Panetta, who, at least on paper, reports to him. But, when Congress sculpted Blair’s job, it left plenty of ambiguity about the extent of the DNI’s authority over the CIA, which seemed bound to create the very squabbling that the reforms were intended to stifle. Blair has compounded this problem with his knack for stirring intramural controversy. He seems to relish the occasions when he can snatch power from Panetta. Over the course of the past year, he has demanded the right to appoint the top American spy stationed in each foreign country, a power traditionally reserved for the CIA director. He has hammered the agency for botching the Afghanistan war and attempted to assert more control over covert operations, from paramilitary units to drone strikes in Pakistan. (Blair declined requests for an interview.)
All in all, relations between the DNI and CIA have never been worse. Last summer, a source close to Blair fumed about Panetta’s “insubordination” to The Washington Post’s David Ignatius. The White House eventually dispatched National Security Advisor Jim Jones as a special envoy to negotiate a truce between the men. When Jones failed to make peace, Vice President Joe Biden took a turn at brokering a cease-fire. According to the Los Angeles Times, Jones ultimately crafted a formal agreement that clarified the relationship. Among other things, it preserved the CIA’s direct line of communication to the White House and the privileged role of CIA station chiefs. Even though Panetta signed the document, Blair refused to give his consent. His huffing finally forced Jones to unilaterally issue a memo last month imposing a clearer division of labor.
Blair’s obstreperousness doesn’t shock those who have worked with him in the past. As one former Pentagon official told me, he “doesn’t suffer fools gladly and his definition of fools is fairly expansive. Sometimes that can [mean everyone] up to and including the secretary of defense and even presidents.”
The fact that relations between the most powerful members of the intelligence community are fraught is not a comforting thought at the present moment. Following the foiled Christmas plot, President Obama has waxed outraged over the bureaucracy’s failure to “connect the dots.” Blair’s job description has always made him responsible for ensuring the efficacy of a system that flows intelligence to appropriate analysts with a minimum of bureaucratic friction. With so much so obviously broken in this system, the question is, does he have the temperament and organizational chops to get the job done?

That Dennis Blair would ascend to the highest ranks of government surprises almost no one who encountered him on his rise there. Even those who don’t like Blair concede his smarts–and those who admire him tend to gush. Richard Danzig, who served as secretary of the Navy in the Clinton administration, told me that Blair exudes “seasoned maturity” and “obvious kinds of stature.” He’s the “smartest-in-the-class–type person,” says Hudson Institute defense analyst Richard Weitz. Hailing from New England Yankee stock and Naval aristocracy, Blair is the sixth generation of his family to serve as an officer. After graduating second in his class from Annapolis in 1968–a year that also included the notorious Oliver North, Senator Jim Webb, and current Chairman of the Joint Chiefs of Staff Mike Mullen–Blair scored a Rhodes Scholarship. Next came a White House fellowship, followed by a string of top intelligence jobs, including a stint on the National Security Council (NSC) staff in the Reagan administration. “He went everywhere with a pad, constantly writing notes,” says one former NSC staffer who served with Blair. “I thought to myself, ‘This guy’s writing a book.’”
While he obviously impressed his superiors, Blair’s headstrong tendencies could also make him a nuisance. In 1999, he assumed control over the United States Pacific Command (PACOM), which controls all U.S. military operations in the Pacific theater. Forty-three countries were under his purview, along with 300,000 military personnel. It was a vast assignment that placed him in proximity to many impending crises. The first of these to strike on his watch came in Indonesia, where government-backed militias waged a violent campaign against an independence movement on the island of East Timor.
Two months after assuming his command, Blair met with General Wiranto, the leader of the Indonesian military, with instructions from Washington to warn him that, unless he stopped supporting the militias, the United States would cut off all contacts. Yet, as Washington Post reporter Dana Priest recounts in her book, The Mission, Blair never issued that warning. Instead, he invited Wiranto to a military seminar in Honolulu, where he promised to train Indonesian soldiers in crowd control. And he told the Senate Armed Services Committee that the Indonesian military was playing “a difficult but generally positive role.”
What did this positive role entail? The Indonesians were supporting militias responsible for killing not only large numbers of East Timorese–perhaps as many as 7,000–but also 16 United Nations election observers. The militias forced 20,000 independence supporters into prison camps, where they were kept with hardly any food. But such humanitarian concerns were secondary. Blair considered maintaining strong ties with the Indonesian military to be far more important.
When the Clinton administration threatened to expel the handful of Indonesian military officers studying in the United States, Blair successfully urged the NSC to reverse this decision. “At no point,” Priest writes, “did Blair ask the special operations officials who worked most closely with Indonesia to reach out to contacts they had developed … to try to arrest the violence.” In other words, he repeatedly freelanced and deftly used his allies in Washington to make the case for a very different sort of policy.