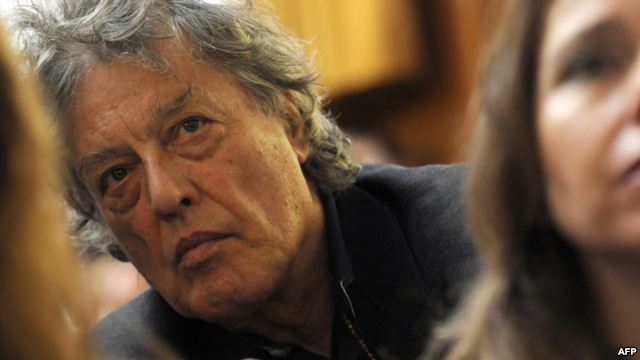 On Belarus’s Lukashenka: ‘He’s Made Monkeys Out Of Us’

Born in Zlin, in the former Czechoslovakia, in 1937, Tom Stoppard is one of the world’s most celebrated playwrights. The winner of an Academy Award for best original screenplay (“Shakespeare in Love”) and four Tony Awards, he is the author of such acclaimed works as “Rosencrantz And Guildenstern Are Dead,” “Arcadia,” and “Rock ‘N’ Roll,” which details the lives of a set of Czech dissidents from the 1960s until the fall of the Soviet Union.
In recent years, Stoppard has made common cause with opposition activists in Belarus, collaborating with the Belarus Free Theater. Stoppard spoke with RFE/RL writer at large James Kirchick on the sidelines of the annual Brussels Forum international affairs conference.
RFE/RL: Why Belarus?
Tom Stoppard: Accident. Well, [the Belarus Free Theater] wrote to me. I  responded. I met them. And we’ve been on and off in each other’s company ever since.
RFE/RL: Certainly there’s an element of your history, feeling a connection or responsibility?
Stoppard: My personal history? Not really. It was the theater. I’d come across the figure of the banned actor, the banned director, the banned writer in Prague 20 years earlier — 30 years earlier, for heaven’s sake. And I was responding to the idea of the banned artist, really, more than which country was relevant.
RFE/RL: You wrote in “The Independent” a couple of weeks ago that the situation in Belarus is an embarrassment for Europe.
Stoppard: Well, I believe it is. I think that people are slightly embarrassed to actually have Belarus put on their agenda again and again because they don’t know what to do about Belarus. They talk a good game, it’s quite long-term, it’s quite abstract, but in the meantime [President Alyaksandr] Lukashenka does pretty much what he wants to do.
RFE/RL: You’re an artist. You don’t claim to have the answers. But what should be done?
Stoppard: I don’t claim to have the answers. If there were answers, there’d be no problem. But I think somebody said yesterday, if there were people dying in the main square in Belarus, then something would be done. In other words, there are things which would be done in other circumstances, which is a situation you would need, for example, Joseph Heller to do justice to. Or Jonathan Swift, say. It’s like saying, “Well, we can’t really get deeply involved because nobody’s dead. Nobody’s being killed.” It’s not actually true. There have been people killed, but they’re not being killed on television.
RFE/RL: Lukashenka’s wily enough, smart enough, to know not to pull the guns out.
Stoppard: My own view is — and I’m an amateur here — is that he’s played his hand a lot better than Europe has. I mean, he’s made monkeys out of us, encouraged us enough when it’s suited him, then turned around to face the other way, leaving Europe looking a little foolish, frankly.
RFE/RL: So what can be done? You hold your protests. You write your newspaper articles.
Stoppard: There’s an argument at this conference, which goes roughly: Well, we can’t really do serious economic sanctions because then the population suffers. But have they heard from the population lately? The population has been suffering for the past 15 years and the population — OK, well, not the population as a whole; there’s a section of the population which would prefer the stability of the dictator to the uncertainties of a true democracy — but broadly speaking, the people who are getting hammered there economically would like the foundational cause remedied.
So I think economic sanctions actually would be probably preferable if they weakened the dictator’s position, which they surely would. In the end, I think that, as we found in the ’80s with the U.S.S.R., there are two things which make certain kind of closed societies impossible finally. One is largely economics, but the other one is the flow of information.
My personal view — whimsical though it may be — is that the video finally brought down the Soviet empire because you could jam television and radio, but when the video became available progressively — this is more than a joke, though it sounds like a joke — you couldn’t keep the bad news out. The bad news being that life outside is a hell of a lot better than life inside. Because they’re being told that life outside is corrupt and abusive and, of course, some of it is. No Western society is utopian.
So I think the information — the leverage of information — no longer applies. The Internet has done that job. There’s now as much information as you need to have about what life is like in Poland compared to Belarus, or in France, or anywhere. But my understanding is that without the Russian revenue — oil and gas, that whole industry — the economy just couldn’t survive. And when the economy collapses, I don’t think that Lukashenka could carry on as though it was Mugabe in Zimbabwe.
When the economy collapses in the heart of Europe, then it’s over, I would have thought, for him.

RFE/RL: But he has the Russians, as Mugabe has the Chinese.
Stoppard: Well, that’s exactly what I’m saying. The problem for the Europeans is they can’t close the circle. The side facing Russia is open and therefore an economic assault — if that’s the word — it’s very hard to make that stick. I find that my own knowledge of this is constantly being adjusted in some detail while I’ve been here in the last 24 hours talking to people for whom it’s their day job. It’s not my day job.
There’s only one thing I want to say, really, which is by the nature of these people’s jobs and by the nature of the way operations work between ministers, between countries inside and outside a conference like this, everything becomes an abstraction which could be distilled into an arithmetical table. So much of what goes on here can be distilled into an addendum which would take the form of, essentially, numbers in a table.
And it’s really, really hard to change the mindset so that people say, well, actually, behind these numbers there are these individual people with children and parents, and I’m not very far away from a place where they’re arrested without cause, they’re put through a rigged trial, they’re given a sentence of years in jail. This is already happening now, for doing stuff which you could do in the streets of Brussels with impunity or any of the other 27 countries. And to try and make them focus on the fact that there are actual people waiting for this to be resolved is difficult.
RFE/RL: You spoke in your speech of how standards are falling in the West. Could you elaborate on that?
Stoppard: It’s not just Europe. In a certain sense, the imminent elections in Russia are about as fake as the election in Belarus. It’s just a different kind of fake. That’s what I mean about saying that it’s not as though Belarus were an anomaly in the map of utopia. Look at Italy. If one starts talking about corruption and control of the media, you could leave that country blank and you could write in Belarus. In a different sense, you could write in Italy.
I mean, even in England, media monopoly is an issue, with [Rupert] Murdoch and BSB Sky. So trying to get a perfect democratic society, trying to get that blueprint to come alive, is very, very hard when you’re trying to reconcile it with the freedom to be a media baron.
RFE/RL: You speak to a lot of young people, theater students. Do you sense a feeling of complacency when it comes to Belarus, Russia, these problems?
Stoppard: [With] the students, it’s not complacency. It’s just that they don’t know, they don’t know about it. Very few know about it. I’ll tell you, why would they know? Belarus is barely a story now. It’s completely overwhelmed by much more photogenic stories in North Africa.
I’m not complaining about that; it’s the nature of the beast. But there are people at the conference on whose desks is the Belarus dossier. It’s those people one is talking to. What actually are you going to do?
Link