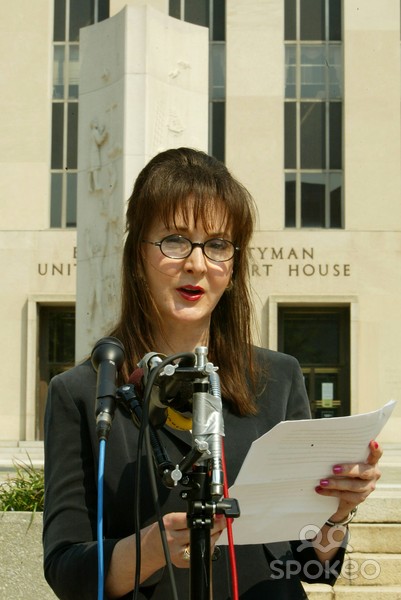 The Tragedy of Deborah Jeane Palfrey

On May 1, Blanche Palfrey awoke from a nap and wondered where her daughter was. The widowed 76-year-old wandered outside her Tarpon Springs, Fla., mobile home and noticed a tricycle — normally housed in a nearby toolshed — in her yard. Opening the door to the shed, she discovered her 52-year-old daughter hanging from a metal beam on the ceiling, a nylon rope fastened tightly around her neck.
In a handwritten suicide note, Deborah Jeane Palfrey — known as the “D.C. Madam” — begged for her mother’s forgiveness. She was the victim of a “modern-day lynching,” she wrote, convicted in April of racketeering, money laundering and mail fraud in the operation of a call girl service. She had served an 18-month prison sentence in the 1990s for a similar offense and could not bear to spend a potential 55 years in prison. Palfrey had amassed an impressive list of clients in Washington, including Louisiana Republican Sen. David Vitter, former U.S. Global AIDS Coordinator Randall Tobias and Harlan Ullman, the man who coined the term “shock and awe.”
Palfrey is ultimately responsible for the decision she made to take her own life. But if the federal government had not pursued her in the merciless fashion in which it did, she would still be alive.
Washington is a place that chews people up and spits them out, and Palfrey is but its latest victim. Like Monica Lewinsky and Juanita Broaddrick before her, she got caught in the wake of big, important men with big, important careers. “We extend our condolences to Mrs. Palfrey’s family,” read a statement from the U.S. Attorney’s Office for the District of Columbia, which prosecuted her. How thoughtful of them.
Palfrey claimed that she merely ran a “sexual fantasy service,” the business of which was entirely legal.

She made her employees sign forms promising they would not engage in unlawful activity, and she claimed that if the women did, they did so without her knowledge. This sounds like hokum, but so what?

The government had no interest in spending countless dollars of our tax money on a three-year investigation into the doings of a woman who provided a contractual service for consenting adults that harmed not a soul.
Before one complains about the unseemliness of her profession, keep in mind that Palfrey started her agency because she was “appalled and disgusted” by “how seedy, lazy and incompetent” other escort firms were. Following this incentive, she was a teetotaler, and there is no indication that she ever physically abused, emotionally manipulated or otherwise took advantage of the women in her employ, all negative externalities of prostitution that motivate people to outlaw it. Indeed, all of her employees spoke highly of her, and Palfrey would often refuse to provide services to men she deemed indecorous.
Palfrey was a model “madam.”
The absurdity of our overzealous government’s hunting of this poor woman was made evident by the fact that Palfrey was arrested not for the sort of offenses committed by a sleazy pimp but, rather, for money laundering and other associated financial crimes, covert precautions that she would not have had to undertake were prostitution legal. Not only was Palfrey reportedly an excellent boss, she was also a successful entrepreneur: From 1993 until 2006, she earned an estimated $2 million. Unlike the government that prosecuted her, she actually created jobs and generated wealth.
Palfrey is not the first person whose death government prosecutors ought to have weighing on their consciences. After her indictment by a Washington grand jury, Palfrey spoke ominously of Brandy Britton, a former sociology and anthropology professor at the University of Maryland whom she once employed.
Britton later operated as an independent contractor and was caught in a police sting operation. She committed suicide — also by hanging — last February. “She couldn’t take the humiliation,” Palfrey told ABC News. “Her whole life was destroyed.”
Prostitution will exist whether the government outlaws it or not. Not for nothing is it called the “oldest profession.” Why not legalize its practice? That way, it can be zoned and regulated: “Streetwalking” could remain illegal and procurement would be limited to private residences. Even if one finds the legalization of prostitution too much to stomach (as most of the public currently does), surely the government should conserve its limited investigative and prosecutorial resources to go after pimps who engage in sex trafficking or who physically abuse their prostitutes. Or, you know, actual criminals like murderers and thieves.
If there was anything beneficial to emerge from this tragedy, it was the exposure of at least one government-employed john whose hypocrisy underscored his baleful influence on public policy. Tobias, former head of the United States Agency for International Development and Global AIDS coordinator, was one of the many men whose phone numbers appeared in the 46-pound list that Palfrey released to the media following her indictment. Tobias refused to fund programs that assisted prostitutes and encouraged abstinence over condom usage in the prevention of AIDS. Tobias was forced to resign over the revelations, and it’s beneficial to humanity that a proponent of such stupid policies is now away from a station where he could do so much harm. Yet, unlike the woman who provided him with the “massages” he sought, he lives to see another day and has never faced the threat of prosecution. Today, he serves as head of the Indianapolis Airport Authority.
As for Vitter, a week after Palfrey’s suicide, the Senate ethics committee decided not to launch an investigation into his use of the escort service. The consequences of his adultery are a matter for him and his wife, but something is seriously awry with our system of justice when Blanche Palfrey wakes up to find her daughter swinging from the rafters of a toolshed and Wendy Vitter wakes up to find her husband pontificating from the well of the United States Senate.