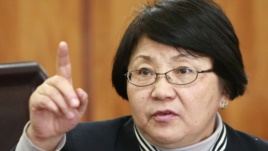 The Mountain Roza Otunbaeva Has to Climb

BISHKEK — Roza Otunbaeva may be the head of Kyrgyzstan’s interim government, but she’s the country’s chief mourner as well.
The 59-year-old former diplomat — known to everyone here as “Roza” — has emerged this week as the calm, motherly face to a chaotic domestic political situation.
On April 7, violent protests initially sparked by rising energy prices but magnified by growing anger over widespread corruption and a crackdown on opposition politicians and independent journalists forced Kyrgyz President Kurmanbek Bakiev to flee the capital.
He is suspected to be holed up somewhere near his native city of Jalal-Abad in the southwestern part of the country. Failing to quell the riots, at least 79 people were killed in clashes with security forces and over 1,000 wounded.
In the wake of the downfall of Bakiev’s regime, Otunbaeva has had the supremely difficult task of rebuilding a shattered government, never mind reassuring a U.S. administration concerned about the status of its crucial Manas air base, while also balancing her country’s important relationship with its neighbor and top trading partner Russia.
But at a mass funeral outside Bishkek on April 10 for 16 of the men killed earlier this week, she put politics aside and spent most of the morning comforting her bereaved countrymen.
Making her way through huge crowds in a muddy field with only three bodyguards to protect her, Otunbaeva drove a beeline to a hill behind the stage where scores of grieving women — the wives, aunts, grandmothers, and sisters of the men buried on a hill not far from the Ala-Too mountain range — could be found wailing over their lost loved ones. The day before, she visited two hospitals in Bishkek where the lives of some of those wounded earlier this week hang in the balance.
“For the people who gave their lives, we must establish democracy and good government for Kyrgyzstan,” she told the crowd. “This is our obligation.” She also said that April 7 would be commemorated in the future as an official Day of Remembrance.
Calls For Vengeance
Most of the Kyrgyz citizens I’ve talked to in the past two days want to see Bakiev either dead or behind bars. When I asked a proponent of the former solution whether meting out fatal punishment so early in the stages of a people-powered revolution appealing to democratic ideals might mar its ostensibly liberal principles, he mischievously asked, “Who said the government has to kill him? He could just be taken care of by some of his own criminals.”
Gulperi Adilova, who attended the funeral, said that whatever happens to Bakiev, when he dies he should be cremated rather than buried, as cremation is forbidden in the Islamic tradition and Bakiev has lost the right to call himself a good Muslim.
Despite the anger at Bakiev, Otunbaeva has resisted calls for vengeance. Earlier this week, she offered the ousted leader a peaceful exit from the country if he offers his resignation, saying that the interim government would “guarantee his personal safety” should he do so.
But that offer appears to have since been rescinded by other forces within the interim government. On April 9, Deputy Acting Prime Minister Azimbek Beknazarov said that the government would issue a decree depriving Bakiev of his presidential immunity so that he can be prosecuted for crimes committed while in office.
Otunbaeva’s rise to her present position was foretold on March 17 when the main opposition parties gathered in Bishkek to draw up a list of grievances against the regime and appointed a National Executive. They chose Otunbaeva to chair what was essentially a shadow government.
She has since announced that the country will hold a presidential election in six months. Yet the very reasons why Otunbaeva was such a natural choice for the position of interim leader — her years abroad as foreign minister and ambassador to Washington and London and her lack of a domestic political machine because of it — may prevent her from getting much farther in the rough and tumble of Kyrgyz politics.
While the interim government may be united in its dislike of the country’s former rulers, it is also marked by the presence of many go-getting politicians like Temir Sariev, who ran for president last year and may well do so again, and former parliament speaker Omurbek Tekebayev.
By its very nature, Kyrgyzstan’s interim government has a shambolic feel to it. While most people are obviously glad to see Bakiev gone, whatever enthusiasm they have for the future is marked by a pervasive caution.
This country already experienced the ecstasy of democratic promise in the guise of the 2005 Tulip Revolution, an exhilarating period quickly dampened by the onset of Bakiev’s frequent crackdowns and human rights abuses.
At today’s interment, an already depressing day was heightened when an elderly woman fainted on stage, the funeral’s master of ceremonies frantically calling for a doctor as mourners headed for the cars and buses waiting on the other side of the field.
It was a fitting end to an uncertain week, and may portend chaos yet to come.