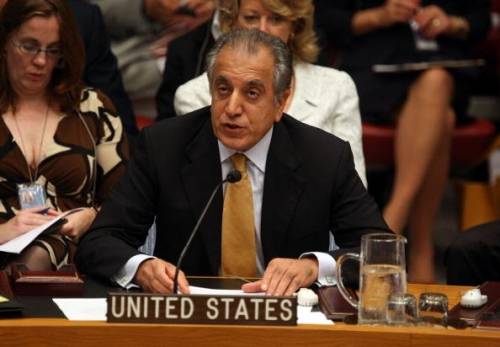 The Man Who Would be King

Is our U.N. ambassador running for president of Afghanistan?

Khalilzad would not be the first U.S. government official to become president of a foreign country. In 1998, Lithuanian voters elected as president 71-year-old Valdas Adamkus, who until then had spent nearly 50 years living in the United States. Adamkus fought in the anti-Nazi (and later, anti-Communist) underground and fled his homeland for the United States in 1949. He settled in Chicago where he attended the Illinois Institute of Technology, and in 1971 he became a deputy in the Environmental Protection Agency (EPA), eventually rising to become the organization’s Midwestern regional administrator. In 1983, Adamkus earned national plaudits when he blew the whistle on EPA heads in Washington who attempted to whitewash a report his staff had written about pollution in Michigan. With $50,000 of his own money and $1.25 million from friends in Chicago, Adamkus defeated Lithuania’s former prosecutor general, who had accused him of being a carpetbagger. He serves to this day.
Khalilzad would face steeper odds than Adamkus. Afghans are more likely than Lithuanians to view the United States with suspicion, despite the fact that the United States helped liberate both countries from totalitarian rule. “Zal is an Afghan-American, but he is an Afghan-American,” Riedel notes. “This is an extremely nationalist country.” What’s more, Khalilzad would hardly be the only big name vying to succeed Karzai. Among the other possible contenders are Ali Jalali, the country’s former interior minister who resigned in 2005 and currently teaches at National Defense University in Washington; Mostapha Zaher, the grandson of Afghanistan’s late king; the head of Kabul University; the current parliamentary speaker; and the country’s finance minister. According to a U.S.-based Afghanistan expert, at least two Afghan newspapers have included Khalilzad in presidential polls–and he “fares pretty poorly in them.”
If Khalilzad runs anyway, it may be because he decides that there is nothing left for him to achieve in the United States. “In terms of the U.S. government, it’s pretty clear he’s tapped out,” the former Foreign Service officer who worked with Khalilzad in Iraq told me. And returning to the land of his birth as president would serve as a stunning culmination to a storied international career. Plus, given Afghanistan’s numerous ongoing crises, the country could probably do worse than having a capable, experienced diplomat with ties to powerful Americans at the helm. As one former State Department official told me, “You could argue that Zalmay Khalilzad would have more relevant knowledge pertaining to governing Afghanistan than a Midwestern EPA administrator would to running Lithuania.”