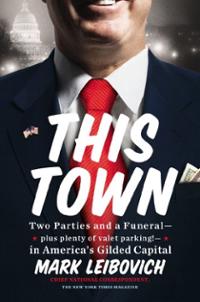 This Town
By Mark Leibovich
Penguin, pp.400, £17.99
Many books have been written about the corruption, venality and incestuousness that characterise Washington DC, but none has been as highly anticipated or amusing as This Town. Written by Mark Leibovich, the senior national correspondent for the New York Times magazine, it has been on the minds of Washington’s chattering classes for at least two years before its release. Sparking that interest was the revelation that a young, ambitious Capitol Hill press aide, whom Leibovich had been cultivating as a source, was secretly forwarding him emails that provided an insight into how Washington really works.
That story was broken by Politico, the political web portal founded in 2007 that has revolutionised the way American politics is discussed (if there is anything like a Greek chorus in Leibovich’s tale, it is Politico’s Mike Allen, the mysterious author of a daily email newsletter who serves as Washington’s omniscient narrator). What might have seemed like an incident of minor significance to a select group of Beltway insiders was soon the subject of relentless media coverage. The story of the story Leibovich was pursuing became emblematic of the larger phenomenon he had set out to diagnose: the navel-gazing of Washington, a city where to ‘love’ and ‘use’ someone are ‘mutually non-exclusive’.
Fortunately for Washington’s various ‘mob families’ — the ‘journalists, corporates, pols and operatives’ inhabiting it — This Town is more a gentle skewering than a searing indictment. Leibovich certainly mocks his targets, like the ‘formers’, ex-officials who move on to lucrative careers in lobbying or media and ‘stick to Washington like melted cheese on a gold-plated toaster’.
But more often This Town generates chuckles rather than indignation. Leibovich, a dazzling writer, is having too much fun marvelling at the circus to be overly cynical. From office ‘Me Walls’, covered with photographs of the subject posing with various and sundry worthies, to ‘party rape’, the practice of strategically throwing shindigs for people whether they want them or not, Leibovich has an eye for the details that distinguish ‘America’s gilded capital’.
Perhaps surprisingly, some of his toughest criticism is reserved for the Obama administration, which, as everyone now knows, came to Washington with grand promises of reform, only to wind up just like the rest of them. ‘Superior nonchalance, shrugging self-deprecation and hardheaded wonkishness remain the preferred persona’ in Obama’s Washington, and the administration has proved to be no more immune to the city’s ills than its predecessors. Though the Obamians vowed to change the culture of Washington, a bevy of former officials have gone onto high-powered lobbying jobs, often working for the very corporate titans (BP, for example) whom they castigated while in office.
Nor have they proved resistant to the vanity that Washington instils in almost all who settle there. The book’s greatest scoop is a leaked White House memo defending Obama’s controversial consigliere Valerie Jarrett from prying reporters. ‘Valerie is someone here who other people inside the building know they can trust (need examples).’