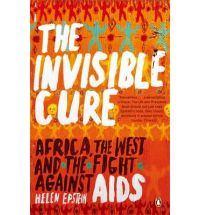 The Idea War Against African AIDS

The Invisible Cure: Africa, the West and the Fight Against AIDS
by Helen Epstein; 352 pages; Farrar, Straus and Giroux
Last year, while visiting a black township on the outskirts of Cape Town along with a group of European tourists, I entered the lair of a sangoma, a witch doctor — or, in culturally sensitive language, a “traditional healer.” The hut was dank with animal pelts, heads, and claws hanging from the wall. When my European companions asked the sangoma, a man dressed in jeans and a collared shirt, what he would prescribe for various ailments, he offered remedies off the top of his head. Back ache? A little zebra tail mixed with crushed pig’s pelvis (or perhaps it was something else). While I watched this exchange — silently horrified that this was the way by which a majority of South Africans receive medical care — the others in the group were delighted to partake in such a “diverse” cultural moment.
Helen Epstein, a molecular biologist and public health expert who has spent many years studying the ravages of disease in Africa, would balk at this insincere cultural immersion. In her new book, “The Invisible Cure: Africa, the West and the Fight Against AIDS” (Farrar Straus and Giroux, 326 pages, $26), Ms. Epstein avoids both the patronizing and the “culturally sensitive” demeanors that infect much of the debate on AIDS in Africa. Ms. Epstein, whose essays in the New York Review of Books over the past decade have provided some of the most illuminating reporting on AIDS in Africa, here offers one of the most personal, thorough, and conclusive studies of this human plague that has utterly devastated a continent.
“The Invisible Cure” is largely a comparison between AIDS in Uganda, which has instituted a variety of successful policies thwarting the disease, and South Africa, which has one of the highest HIV incidence rates in the world. Part of the reason why the disease has been so destructive in South Africa is apartheid, which for decades destabilized the African family through a punitive migrant labor program that separated men from their wives and ruined social stability. Ms. Epstein also presents a convincing answer as to why AIDS — largely confined in the Western world to homosexual men and intravenous drug users — has been so prevalent among heterosexuals in Africa: While Americans “tend to have several long-term relationships over a life time, they usually have them sequentially, not concurrently,” like Africans. This “sexual networking” lays much of the groundwork for the spread of HIV.
In addition to this unique set of social factors, AIDS in South Africa was compounded by an astonishingly ignorant government. For years, as the disease ravaged his country, President Thabo Mbeki refused to admit that HIV caused AIDS and regularly sought the counsel of American AIDS “dissidents” who contend that AIDS is caused not by a sexually-transmitted virus but by the amorphous cause of “poverty.” Intellectually committed to finding “African solutions for African problems,” Mr. Mbeki stridently — and disastrously — distanced his country’s AIDS policy from what American and European AIDS scientists prescribed.
As with so many of the problems persistent in the non-Western world, the AIDS crisis in sub-Saharan Africa can largely be blamed upon the horrendous treatment of women. In many of the societies Ms. Epstein documents, women are considered inferior to men and lack the ability to challenge ingrained chauvinistic practices. In spite of the fact that it has one of the world’s most liberal constitutions, South Africa remains a country with one of the highest rates of sexual violence. Accordingly, Ms. Epstein cites a World Health Organization survey found that 20% of African women who tested HIV-positive “experienced some sort of negative outcome if their husbands or boyfriends found out,” and many were beaten or abandoned by their male companions. Ms. Epstein, sensitive as she is to the peoples she documents, does not spare African culture criticism. She believes — and makes the case very convincingly — that HIV infections will go down once African men view women as equals.
America has been nothing but generous in its approach to AIDS in Africa. In 2003, President Bush committed $15 billion to fight AIDS there and just last month pledged to double funding. But in the case of abstinence-only programs promoted by evangelical organizations, as Ms. Epstein documents, much of this money has been contracted to servicing a distinct political agenda rather than support programs that show the best results. For example, considering that “most HIV transmission in Africa takes place in intimate, long-term partnerships” (and not through promiscuity), abstinence-only programs that ignore the realities of African culture are hardly equipped to stanch the spread of HIV. But even the unmatched munificence of America has its shortcomings: an astonishing 60% of American foreign aid gets spent on the hefty salaries of aid workers and American-produced equipment. And things are not much better on the African side. “The very cohesiveness of African societies,” Ms. Epstein writes, “has contributed to a political culture in which the demands of kin, clan, and tribe too often take precedence over the good of unrelated others, however needy.”
Although anti-AIDS efforts in Africa stalled for many years due to corrupt or irresponsible government policies, Ms. Epstein is hopeful about the future. But every now and then, one reads a news story that shows just how persistent mythology (of which both abstinence-only programs and witchcraft are two forms) remains. Last June, for example, the South African health minister (who had also warned against HIV drugs as being toxic and told sufferers to eat beetroot, garlic and olive oil instead) decided to incorporate sangomas into the country’s health service. As AIDS in Africa continues to prove, denial is not just a river in Egypt.