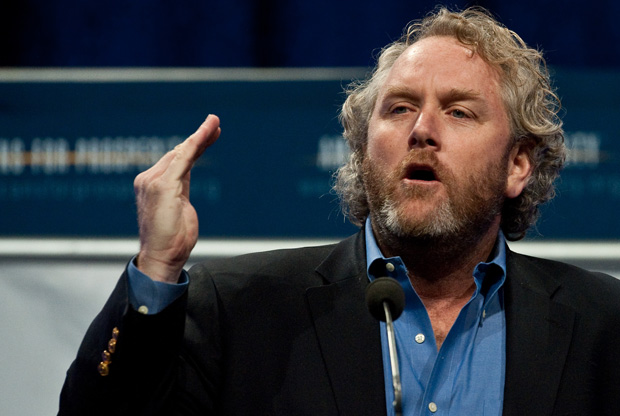 The Audacity of Breitbart

The last time I saw Andrew Breitbart, who died this morning at the age of 43, he showed me a photograph of Anthony Weiner’s genitals.
That was the day after Breitbart, fresh off a plane from his home in Los Angeles, hijacked Weiner’s press conference at the New York Sheraton. The soon-to-be former Democratic congressman was to take the stage and deliver a confession that he had, in fact, sent naked images of himself to women via Twitter—an accusation he had emphatically denied since Breitbart had published a series of shirtless self-portraits of the congressman on his website. Hoping that Weiner would announce his resignation, Breitbart, the Andy Kaufman of American media, had come to New York to claim his scalp. When the congressman was late for the press conference, the Internet entrepreneur commandeered the microphone and ripped into the various journalists who doubted the authenticity of his claims. In fact, Breitbart claimed he had much worse.
The next evening, I met Breitbart at Langhan’s, an Irish pub and the regular watering hole for employees of Fox News. A group of Indian businessmen sitting behind us instantly made the connection between the floppy-haired man talking endlessly on the bar’s television and the guy sitting right across from them. Breitbart loved the attention. Within minutes, he whipped out his smart phone, and there was Anthony Weiner, as naked as the day he was born.
***
Andrew Breitbart, for better and worse, was shameless. Sometimes this got him into trouble, like when he posted excerpts of a speech by a low-ranking Obama Administration official, Shirley Sherrod, which deceptively made it seem as if she was making racist statements. It sparked controversy that ultimately led to her resignation. (When the full video was eventually released, Breitbart told Newsweek, “If I could do it all over again, I should have waited for the full video to get to me.”)
But Breitbart’s audacity also revolutionized the media landscape and American politics. It came as a revelation to many that Breitbart had once worked as a research assistant for Arianna Huffington, in his younger—and her right-wing—days. As the behind-the-scenes partner behind the Drudge Report, Breitbart quietly became one of the most powerful men in media. Though the site has always borne the personal stamp of its founder, Matt Drudge, Breitbart was, for many years, the second in command, every day sifting through thousands of stories to shape the media narrative.
Once, on a junket to Azerbaijan, I remember looking over his shoulder as he manned the site for his editing shift. I was amazed at how this goofy guy in a baseball cap would sit down in front of his laptop and suddenly transform into the maestro of American media, fielding emails from some of the country’s highest-profile journalists begging him for a link.
Breitbart eventually left Drudge and started his own media mini-empire, a series of blogs marked with the “Big” Brand: Big Journalism, a conservative media monitor; Big Government, a libertarian blog; and Big Peace, a hawkish—occasionally freakishly so—foreign-policy site. Through his sites, he played a major role in promoting the Tea Party, speaking at events in far-flung cities across the country. He had plans, half-serious, I think, to start Big Black, a site for African-American conservatives, and at one point he said that he wanted me to edit Big Gay.
Which leads me to a point of more than just personal interest: In addition to being a new-media pioneer, Breitbart was a significant force in making the GOP, and the conservative movement more broadly, friendlier to gays. Not long after I met Breitbart, we began to engage in a series of debates about gay marriage, which sometimes found their way onto various radio talk shows that Breitbart would occasionally guest host.
Though he opposed gay marriage, it wasn’t the issue that got him out of bed every morning, and he argued not from a position of religious conviction, but tradition: The ideal family situation for children, he said, was with a mother and father. (Despite his image of a wild man, he was a devoted father and loving husband; he once told me, in dead seriousness, that the only reason he wasn’t a massive failure in life was because of his wife.) Breitbart himself was raised Jewish by adoptive parents, and while he was in no sense a religious man, he had a respect for religion and religious people.
Breitbart was the rare sort of conservative who was as comfortable among Christian evangelicals as he was among gay people; some of his favorite music was 1980s British New Wave, and it doesn’t get much gayer than that. Perhaps this is what led some of his left-wing detractors to insinuate that he was gay himself, an accusation that didn’t seem to bother him at all.
In 2010, Breitbart joined the board of GOProud, a conservative gay organization. The following year, when the Conservative Political Action Conference announced that it would ban GOProud from its conference in deference to complaints from social conservative groups like the Family Research Council, Breitbart pulled out of the conference and declared that he would host a party for the “homocons” instead. His attitude on gays, like on most things, was shaped by the socially liberal milieux in which he was formed: southern California and New Orleans, where he attended Tulane University.
Breitbart was loathed as much as he was loved, which is just the way he wanted it. I didn’t always approve of his tactics, and I can’t say how history will judge his contributions to the worlds of media and politics. But today the American media lost one of its most perceptive innovators—a man who was so much smarter than the court jester his haters thought him to be.