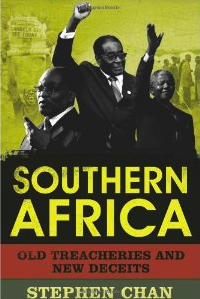 Southern Africa: New Treacheries and Old Deceits
by Stephen Chan; Yale University Press; 204 pages; $30.
IN THE SUMMER of 2006, I witnessed one of the innumerable trials of Jacob Zuma. The future president of South Africa was facing charges of corruption, having been acquitted of rape just months earlier. Outside the courthouse in Pietermaritzburg, a small city about an hour’s drive west of Durban, Zuma would daily ascend a stage in the town square before a crowd of thousands of Zulu supporters, who had been bussed in from all over the region. There he performed his trademark dance routine, sung to the tune of an apartheid-era “struggle song” entitled “Umshini wami,” or, “Bring Me My Machine Gun.” It was impossible to deny Zuma’s spine-tingling charisma, which easily rivaled that of Barack Obama, Bill Clinton, or any other superstar politico.