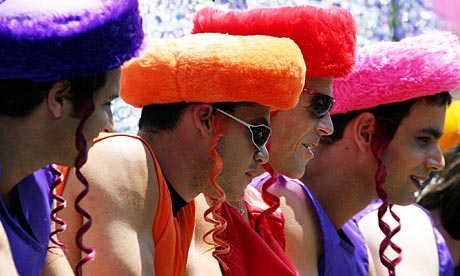 Madrid
Earlier this month Madrid celebrated its annual gay pride festival, reputed to be the largest in Europe. It featured the usual mixture of calls for tolerance, righteous political speechifying, and raucous display of sexuality. But the Spanish capital also earned a dubious distinction this year not for anything it included, but for what it excluded: Israel.
The municipality of Tel Aviv had originally planned to sponsor a float in the Madrid parade. But Spain’s Federation of Lesbians, Gays, Transgenders and Bisexuals revoked the invitation following Israel’s raid on the Gaza flotilla that ended with nine dead pro-Hamas activists.
Associated Press
Not everyone was welcome at Madrid’s gay pride parade.
“After what has happened, and as human rights campaigners, it seemed barbaric to us to have them taking part,” the Federation’s president, Antonio Poveda, explained. “We don’t just defend our own little patch.”
Mr. Poveda chose to ignore the video evidence supporting Israel’s account of self defense. But even if Israeli soldiers were at fault, why Israeli gays should be made to answer for the actions of their government was something that Mr. Poveda never bothered to explain. His justification rings of the “collective responsibility” trope that critics of the Jewish state often invoke to attack its security measures, especially the Gaza blockade, which they claim unfairly punishes ordinary Palestinians rather than Hamas.
By joining the international campaign to delegitimize Israel, Spain’s leading gay organization undermined its purported mission: the furtherance of gay rights. Israel is the only Middle Eastern country that even has gay pride parades, never mind respects the dignity of homosexuals. Saudi Arabia beheads gays. Syria arrests them in sting operations. Iran hangs them from cranes in public squares. (Speaking at Columbia University in 2007, Iranian President Mahmoud Ahmadinejad claimed that there are no homosexuals in his country, an absurd assertion nonetheless portentous for its murderous aspirations). As for Gaza, one of Hamas’s leaders has referred to gays as “a minority of perverts and the mentally and morally sick.”
Like so many other democratic values, when it comes to gay rights Israel is an oasis in a sea of state-sanctioned repression, a “little patch,” to use Mr. Poveda’s words, that he and his comrades ought to defend. Gays serve openly in the Israeli military. While gay marriages can’t be legally performed in Israel, the government grants gay couples many of the same rights as heterosexual ones and recognizes same-sex unions performed abroad. Many Palestinian gays seek asylum in Israel. And like most aspects of Israeli life, the gay scene is disputatious. This year there was not one gay pride parade but three, including one that rejected the implicitly Zionist message of the municipally-sponsored parade. As one Israeli friend joked to me, “Two gay Jews, three parades.”
The decision by Spain’s leading gay group is part of an international trend that has seen far left elements hijack what ought to be a non-partisan movement to promote individual liberty. Earlier this year, for instance, organizers in Toronto allowed an organization called “Queers Against Israeli Apartheid” to march in its parade. When I suggested to a Spanish friend that I might bring a small Israeli flag to the parade route, he wrote back, “Are you out of your mind? It’s dangerous.” Instead, I lodged my personal protest by sporting an Israeli Defense Forces t-shirt. To my pleasant surprise, no one raised a fuss.
Whatever the injustice of the Spanish Gay Federation’s behavior, it had little bearing on parade-goers, who partied as if the event they were celebrating had not been blackened by the organizers’ shameful boycott of Israel. Such passivity means that actions intended to isolate the small democracy will continue. Yesterday, Iranian Foreign Minister Manouchehr Mottaki—one of the key figures behind the regime’s support for international Holocaust denial—arrived in Spain for a two-day visit to meet with Prime Minister José Luis Rodríguez Zapatero. The irony in welcoming a top official from a regime that murders gays while banning the only country in the region that treats homosexuals humanely seems to have been lost on Madrid.
This boycott will divide two minority communities that ought to be allies. One would be hard-pressed to find a country that oppresses its gays and treats its Jews well, or vice versa. From Nazi Germany to the modern Middle East, societies that persecute Jews will get to homosexuals eventually—if they haven’t been dispensed with already. This is a lesson that gays ignore at their peril.