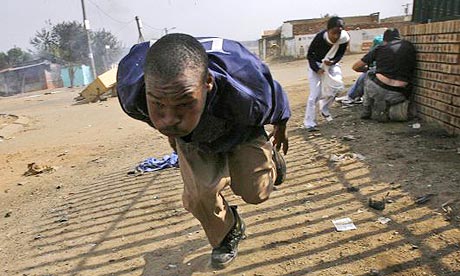 Viewing the horrific images out of Johannesburg last week, one could be forgiven for mistaking them for the harrowing photographs that graced newspaper front pages in the 1980s. Those were the years of “Total Onslaught,” when the African National Congress (ANC) encouraged residents of black townships to fight white rule. Blacks suspected of collaborating with the apartheid regime were rounded up, tried before sham “people’s courts,” and murdered by mobs.
The bloodshed last week was not aimed at the South African government or its suspected collaborators. Instead, it was directed at the country’s most powerless and vulnerable hordes: undocumented refugees.
Thugs wielding machetes, axes and hammers prowled the streets, asking potential foreigners questions to determine their language and dialect. Homes and shops were looted. Women were raped. Even the horrific, apartheid-era practice of “necklacing” — in which ANC sympathizers placed tires doused in gasoline around the necks of suspected collaborators and set them aflame — returned.
Over 40 people have been killed and thousands have been forced out of their homes. Unlike apartheid-era unrest, when blacks were safely isolated in townships far removed from economic hubs, last week’s turbulence spread to Johannesburg’s central business district. The violence seriously undermines the government’s claim that it is capable of hosting the World Cup in 2010.
South Africa, the most developed country on the continent, has attracted a wave of economic and political refugees since the fall of apartheid in 1994. Most of them (as many as three million) hail from neighboring Zimbabwe. Since the initiation of President Robert Mugabe’s seizure of white-owned farms in 2000, this country has been marked by deepening political repression, outrageously high inflation, and widespread hunger.
Thousands of Zimbabweans cross South Africa’s northern border on a weekly basis, and that’s on the increase since the Zimbabwean regime’s violent response to losing presidential and parliamentary elections held on March 29. With South Africa’s official unemployment rate at 22% (in reality, possibly as high as 40%), aggression against foreigners accused of taking precious jobs was only a matter of time.
Ultimately the individuals who perpetrate acts of violence must be held responsible. Yet it’s important to remember that the influx of poor Zimbabweans would never have become a phenomenon had Mr. Mugabe not driven his country into the ground. His terror has been aided and abetted by South African President Thabo Mbeki, whose government has certified a series of stolen elections, hesitates to criticize Mugabe’s human-rights violations, and blocks international involvement in Zimbabwe’s ever-deepening crisis.
Two years ago, an economist in Johannesburg told me that Zimbabwe was “South Africa’s Mexico,” and that the massive number of immigrants flooding into his country should be viewed as a positive economic benefit. This comparison is specious.
Zimbabweans fleeing to South Africa do not intend to make a future there, as Mexican immigrants crossing the Rio Grande hope to do in the U.S. They come to South Africa because they cannot survive in Zimbabwe, a country where the life expectancy is in the mid-30s. If the government doesn’t kill you, AIDS or starvation will.
Furthermore, the U.S. would not allow Mexico to degenerate into the massive political and economic hellhole that Zimbabwe has become. At the very least, we would impose sanctions. But more likely, Washington would support antigovernment contras or initiate regime change, as it did in Central America during the Cold War.
For years, those who defended Mr. Mbeki’s approach did so on the grounds that the situation in Zimbabwe did not affect regional stability. They claimed that Zimbabwe’s turmoil was something that its own government and opposition should resolve, without the pressure of outside intervention.
The disastrous effects of that hands-off policy are now clear.
The most disgraceful aspect of this whole situation is the fact that many of the ANC’s head honchos spent the apartheid years exiled in African countries. Fleeing certain imprisonment in their native land, they found gracious hosts elsewhere — including Zimbabwe.