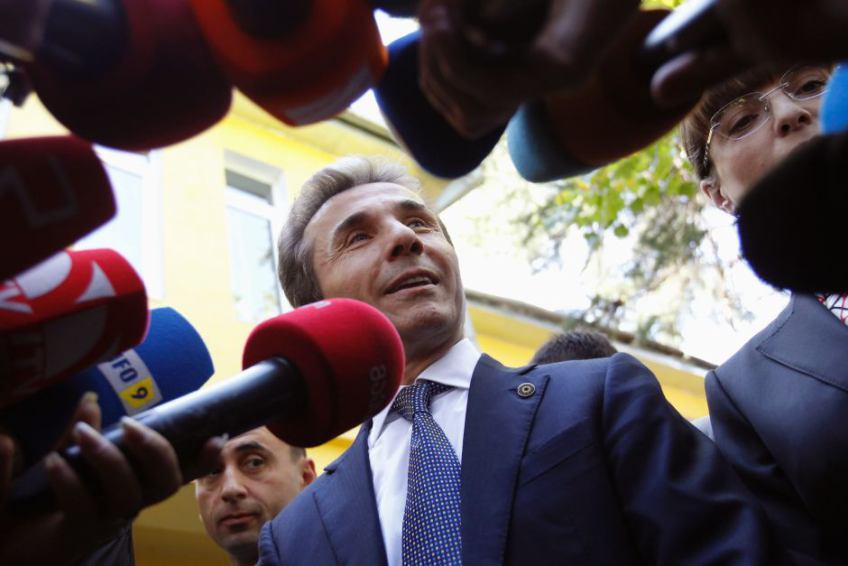 On Monday, voters in the former Soviet republic of Georgia went to the polls in what international observers have called the country’s most competitive and credible election in history. The results took most international observers by surprise, as the opposition Georgian Dream coalition, led by billionaire Bidzina Ivanishvili, won an upset victory over the ruling party of the pro-Western, American-educated President Mikhail Saakashvili.
On Tuesday afternoon, in a televised statement with a bust of Ronald Reagan visible on the mantle behind him, Mr. Saakashvili conceded defeat and vowed to help the victors form a new government, defying the predictions of both the opposition and his detractors in the West, who have characterized him as an autocrat hiding behind a veneer of democratic rhetoric.
Yet while the vote and what seems to be the start of a peaceful transfer of power is a triumph for Georgian democracy, it is also a victory for the country’s neighbor to the north: Russia, which will likely increase its sway here under the new government.
To be sure, Russia, which invaded Georgia in 2008 and still occupies 20% of its territory, was not foremost on voters’ minds in this election. Among the dozens of Georgians I interviewed before the vote, not one mentioned the war with Russia or the Western orientation of Mr. Saakashvili (including aspirations to membership in NATO and the European Union) as an issue that would determine their vote. The most frequent complaint against the government was joblessness.
Despite Mr. Saakashvili’s successful domestic reforms—which have drastically reduced crime and petty corruption, and have opened up the country to international business—Georgia’s poverty rate remains roughly the same as when he came to power in the bloodless 2003 Rose Revolution.
While Georgia’s Western ties under Mr. Saakashvili may not have been a factor in his defeat, they will nonetheless suffer as a consequence. That is because Mr. Ivanishvili, who made his fortune in Russia in the 1990s during the privatization of the post-Soviet economy, will almost certainly move to put Georgia back in Moscow’s sphere of influence.
Announcing entry into Georgian politics last year, Mr. Ivanishvili promised to sell off his assets in Russia. He began selling to Russian state-owned concerns and other Kremlin-friendly businessmen, an option not afforded to oligarchs (such as Alexander Lebedev) who have run afoul of the Kremlin. One doesn’t become a billionaire in Russia in the 1990s, maintain that wealth and sell those assets at a fair price without the approval of President Vladimir Putin.
Mr. Ivanishvili’s means of making money aren’t the only thing that point toward a reorientation of Georgia’s foreign policy. Statements from him and several members of his political coalition show an affinity for Russia and an antagonism toward the United States. Georgia, Mr. Ivanishvili told the Economist last year, is less democratic than Russia (an assessment he will likely have to modify now that his coalition won elections he said his opponent would rig). Moreover, according to Mr. Ivanishvili, the Georgian government “started” the 2008 territorial war with Russia over South Ossetia.
Before the election, Mr. Ivanishvili wrote a threatening letter to the American ambassador in Tbilisi, demanding that he stop the U.S.-funded National Democratic Institute and International Republican Institute from conducting polls, as they were showing results not to his liking. Even more telling is what Mr. Ivanishvili doesn’t say. He has never publicly criticized Mr. Putin, who isn’t a particularly popular figure here.
More worrying are the statements from disparate members of his six-party Georgian Dream coalition, which includes many holdovers from Georgia’s corrupt, post-Soviet regime and an array of discredited nationalists. Gubaz Sanikidze, a leader of the National Forum Party and member of the coalition, said in 2007 that “those who think that NATO membership is the main goal of Georgia are on the path to treason.” Another coalition candidate, Suso Jachvliani, said in crude terms that Georgia had been “destroyed and ruined” by 20 years of supplication to the U.S.
In a news conference Tuesday afternoon, Mr. Ivanishvili sounded a conciliatory note toward the West: “Our strategy is NATO and moving toward NATO.” But such promises sound empty when he follows them up with assertions such as: “It wasn’t a matter of principle that Russia opposed us joining NATO.” Mr. Ivanishvili faulted Mr. Saakashvili for making Georgia a “geopolitical player” and promised better relations with Russia, something that will only come at the expense of Georgian sovereignty as long as Mr. Putin remains in power.
Given their neighborhood and the size of their country, Georgians can’t be blamed for wanting to avoid geopolitics. But putting the country’s path toward NATO and the EU on the back burner could be disastrous. The liberal reforms and democratic standards required for Western integration have a positive effect on the nations in Europe’s periphery. If Georgia continues along the path of the West, it could become like Poland or the Czech Republic, former Soviet satellites that are now robust democracies. If it goes the way of Russia, it will become more like Ukraine and Belarus, the former a kleptocratic, quasi-authoritarian regime, the latter a hard dictatorship.
For years, the Kremlin has tried to destabilize Georgia and remove its pro-Western government from power for having the audacity to ally itself with the West. What the Kremlin couldn’t do via war it then tried to accomplish with a variety of hapless, widely reviled political figures. Only now, in the form of the billionaire Bidzina Ivanishvili, has Moscow proved victorious.