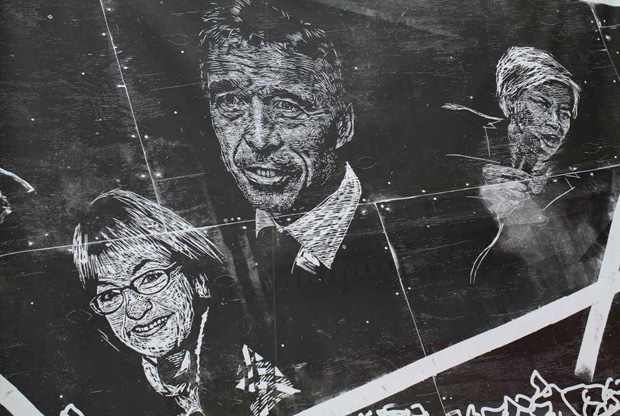 There are few people in the world who have sacrificed more for the principle of free speech than the staff of Jyllands Posten, the most popular newspaper in Denmark. Since the paper published 12 cartoons of the Prophet Muhammad on Sept. 30, 2005—sparking riots in Muslim countries, violent attacks on Danish embassies around the globe, and a worldwide debate about the extent of the West’s commitment to free speech—the Copenhagen bureau has been under constant threat. The downtown office is protected by a giant steel security gate strong enough to block an oncoming truck—a strange sight in a city where nobody seems to lock their doors.

Meantime, Kurt Westergaard, the Danish artist who drew the most famous of the cartoons (Muhammad with a bomb in his turban), lives under constant police protection. In 2008, three men were arrested for plotting to kill him, and two years later, an ax-wielding Somali man actually made it into Westergaard’s heavily fortified house before his guards came to the rescue. In June, a Danish court delivered a guilty verdict in the 2010 case of four Muslim men accused of plotting to storm the Jyllands Posten offices during an award ceremony with the intention to “kill as many as possible.”

While much of the world condemned the newspaper’s decision to run the cartoons, the vast majority of Danes did not think their government should have apologized. “In Denmark we do not apologize for having freedom of speech,” then-Danish Prime Minister Anders Fogh Rasmussen said at the time, a principled stand that came back to haunt him four years later when the government of Turkey protested his selection as NATO secretary general.

Yet one of the most important organs of the Danish cultural elite, the state-funded Danish Arts Council, has taken the opposite view of the citizens who subsidize it. A major art exhibit located just steps away from the heavily fortified Jyllands Posten offices at Copenhagen’s Kunsthal Charlottenborg, among the most prominent contemporary art museums in Europe, makes the case that it is the cartoonist Westergaard, his newspaper colleagues, the former prime minister, and other Western leaders who are the enemies of free expression—not those who continue to call for the murder of cartoonists and publishers.

Pavilion for Revolutionary Free Speech, created by the German artist Thomas Kilpper, premiered at last year’s Venice Biennale as part of the Danish pavilion. A recent Artforum review of the Copenhagen exhibit lauded it for “countering the asserted patriotism of the speakers depicted.” Though the Charlottenborg show just closed, a giant banner displaying some of the faces caricatured by Kilpper underscored with the words “GET RID OF ‘EM” is being displayed at Villa Romana in Florence, a residence and exhibition space for German artists, through Sept. 2.

The original piece consisted of a wooden platform—a “romantic gazebo,” as Kilpper called it—into whose floor he carved the faces of some 33 individuals. “All of them,” according to the exhibit’s promotional materials, “are people who Kilpper believes have been directly or indirectly responsible for promoting censorship, social exclusion or intolerance.”

Included among this parade of horribles, alongside Jyllands Posten culture editor Flemming Rose (who commissioned the cartoons), Rasmussen, and the pope, were a cast of right-wing European politicians: France’s National Front leader Marine Le Pen, Hungarian Prime Minister Viktor Orban, and Thilo Sarrazin, the former member of the Executive Board of the German Federal Bank whose recent book about Muslim immigration, Deutschland schafft sich ab (Germany Does Away With Itself), caused a massive controversy in Europe. Gallery-goers in both Venice and Copenhagen were encouraged to walk over their faces as if they were doormats.

The Copenhagen exhibition included the original wooden floorboards displayed in Venice, which were used as negatives for the creation of color fabric and paper prints that hung from the ceiling and affixed to the walls as portraits. “I started to collect images of figures I am opposed to politically, who, through their conservatism or narrow-mindedness, are excluding certain people from our society,” Kilpper said in an interview in a pamphlet accompanying the exhibit.

What’s most astonishing about this exhibit—even more than its state funding and its close proximity to Jyllands Posten—is that Kilpper attacked people who regularly exercise their right to free speech. “Denmark considers itself to be at the forefront of fighting for total emancipation, and for operating without censorship,” Kilpper says in the interview. “But it is important to ask if the right to speak freely equals the right to insult.” According to Kilpper’s bizarro-view of what constitutes free speech, “insulting” is verboten, but those threatening violence are just fine.

Pavilion for Revolutionary Free Speech encapsulates the divergent American and European attitudes to free speech, with the former tending to view it as an absolute and the latter as a relative value that must be weighed against the “right” not to be offended. But “the right to insult” has always been a part of the liberal European concept of free speech, something that Kilpper, with his insulting artwork, especially ought to understand. Yet in a short video documentary inside the exhibit, Kilpper pronounces the cartoons “not emancipatory but chauvinistic.” In fact, the real chauvinists of the Mohammed cartoons controversy were the Muslim extremists—many of whom lived half a world away and never saw the actual cartoons—who considered it their religious duty to burn down the embassies of a small European democracy because a newspaper in that country published pictures they deemed offensive. That one can open a paper in any Muslim country on any given day and find anti-Semitic cartoons more at home in the rancid pages of Der Sturmer (a state of affairs that does not cause Jews the world over to incite murder) is a phenomenon that doesn’t seem to faze Kilpper.

In addition to presenting a morally inverted view of the cartoon scandal, Pavilion for Revolutionary Free Speech is a display of Kilpper’s dogmatic, and at times adolescent left-wing animus. German Chancellor Angela Merkel, hardly anyone’s idea of a right-wing extremist, comes under attack because “she supported the U.S.-British intervention in Iraq” and, get this, “welcomed the recent killing of Osama Bin Laden.” Though he has said that the purpose of his exhibit is to criticize the forces of reaction on the continent, Kilpper targets three non-European figures—and their inclusion is revealing in its own particular way.

The first to earn this dubious honor is U.S. Secretary of Homeland Security Janet Napolitano, whom Kilpper seems to have selected not for any particularly odious quality that the bland bureaucrat possesses but because she is “responsible for the rising numbers of refused entries to the U.S. and for the more and more militarized wall to Mexico.”

The second non-European leader is Israeli Prime Minister Benjamin Netanyahu, whom Kilpper erroneously claims, “is not in favor of an independent Palestinian State.” (Netanyahu announced his support for such a state in a speech at Bar Ilan University in 2009.) It is curious that, of all the people in the world he could have criticized for sowing “censorship, social exclusion or intolerance,” Kilpper includes the leader of the Jewish state.

Lest one suspect the German artist of harboring that darkest and deadliest of European impulses, he finishes off his non-European collection with the heretofore largely unknown figure of Sheikh Sultan Bin Mohamed Al Qasimi, a minor leader in the United Arab Emirates, who, in 2005, sacked the director of a provincial arts foundation for displaying a work that some conservative clerics had criticized. Al Qasimi’s presence here comes across as an afterthought, a pre-emptive bone thrown to those critics who would undoubtedly ask how an artist mounting an exhibition attacking the enemies of free speech could not have included a single member of a faith some of whose adherents riot and kill in response to “insults” against their religion.

Kilpper displays his ignorance in other, more obvious ways. In his description of Rose, the editor, he writes that the cartoons were published in 2006, not 2005. He castigates Napolitano because “she tolerated Joe Lieberman from the Republican Party.” Never mind that Lieberman is not, and never has been, a Republican. In his explanation of why the pope merits a place among this disreputable cast of characters, Kilpper cites Christopher Hitchens’ 2010 call for criminal charges to be brought against the Catholic leader for his alleged role in covering up priestly sex abuse.

As much as he was an enemy of the Catholic Church and the current pope in particular, Hitchens was an impassioned defender of free speech, a frequent and cheerful blasphemer of all religious traditions, who wrote and spoke frequently in defense of the Danish cartoons and repeatedly offered his home as a place of refuge for high-profile targets of Islamist death warrants like Salman Rushdie and Ayaan Hirsi-Ali. Indeed, I first met Rose, of Jyllands Posten, at Hitchens’ Washington apartment. I do not think I could be accused of unfairly channeling the dead when I venture that Hitchens would be rolling in his grave if he knew that his name were being used to promote such sinister dreck.

There is an irony in Kilpper displaying his work at the behest of a country whose intellectual and political leaders he considers guilty of “narrow-mindedness” and “censorship.” This artist can drag his showcase across the continent safe in the knowledge that all he’ll get in return are state-funded grants. Meantime, the cartoonists and editors across the street receive death threats.