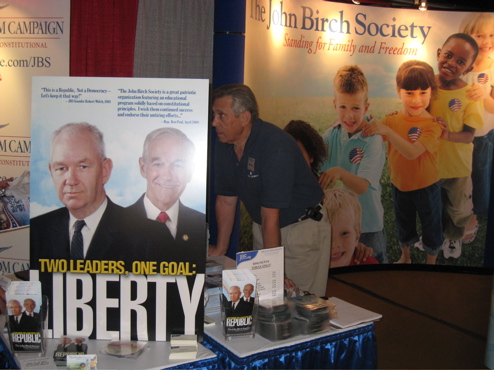 Earlier this week, Newt Gingrich, the former House speaker, said that he would not vote for his fellow presidential candidate Ron Paul should Paul become the Republican nominee. The immediate cause of this dissension – highly unusual in a party primary – was the repugnant newsletters that Paul published from the late 1970s until the mid-1990s, which contain a raft of bigoted statements. Paul has denied authorship and implausibly claims not to know who wrote them.

The story of the newsletters is not new. In 1996, Lefty Morris, Paul’s Democratic Congressional opponent, publicized a handful, and in January 2008, I published a long piece in The New Republic based on my discovery of batches of the newsletters held at the University of Kansas and the Wisconsin Historical Society. Yet Paul’s popularity in the prelude to the Iowa caucuses, where many polls put him in first place, has renewed attention to their revolting contents.

Recent media reports have tended to focus on the newsletters’ bigotry, which was primarily aimed at blacks, and to a smaller extent at gay people and Jews. The newsletters have complicated the situation for writers who have defended Paul, who point out that there is no trace of such prejudice in his public statements. Andrew Sullivan of the Daily Beast, for instance, writing last week about “rethinking” his original endorsement of Paul, suggests that

A fringe protest candidate need not fully address issues two decades ago that do not in any way reflect the campaign he has run or the issues on which he has made an appeal. But a man who could win the Iowa caucuses and is now third in national polls has to have a plausible answer for this.

In a long, anguished post on the Web site of The Atlantic, Conor Friedersdorf wrote that “the question is complicated by facts not in evidence and inherently subjective judgments about politics, race and the norms that govern how much a candidate’s bygone associations matter.” As long as one accepts the most charitable explanation for Paul’s opposition to the 1964 Civil Rights Act (it infringes on private property rights) or re-litigation of the Civil War (the government should have bought and released the slaves instead), perhaps there’s something to that argument. Though Paul’s penchant for promoting the cause of secession puts these stances in a dubious context.

But there is one major aspect of the newsletters, no less disturbing than their racist content, that has always been present in Paul’s rhetoric, in every forum: a penchant for conspiracy theories.

In a 1990 C-Span appearance, taped between Congressional stints, Paul was asked by a caller to comment on the “treasonous, Marxist, alcoholic dictators that pull the strings in our country.” Rather than roll his eyes, Paul responded,“there’s pretty good evidence that those who are involved in the Trilateral Commission and the Council on Foreign Relations usually end up in positions of power. And I believe this is true.”

Paul then went on to stress the negligible differences between various “Rockefeller Trilateralists.” The notion that these three specific groups — the Trilateral Commission, the Council on Foreign Relations and the Rockefeller family — run the world has been at the center of far-right conspiracy theorizing for a long time, promoted especially by the extremist John Birch Society, whose 50th anniversary gala dinner Paul keynoted in 2008.

Paul is proud of his association with the society, telling the Times Magazine in 2007, “I have a lot of friends in the John Birch Society. They’re generally well educated, and they understand the Constitution.” In 1998, Paul appeared in a Birch Society documentary which lauded a bill he had introduced to force American withdrawal from the United Nations. With ominous music in the background and images of United Nations peacekeepers patrolling deserted streets, the film warned that the world body would destroy American private property rights, replace the Constitution with the United Nations Charter and burn churches to the ground.

Paul has frequently attacked the alleged New World Order that “elitist” cabals, like the Trilateral Commission and the Rockefeller family, in conjunction with “globalist” organizations, like the United Nations and the World Bank, wish to foist on Americans. In a 2006 column published on the Web site of Lew Rockwell (his former Congressional chief of staff and the man widely suspected of being the ghostwriter of the newsletters, although he denied it to me), Paul addressed the alleged “Nafta Superhighway.” This is a system of pre-existing and proposed roads from Mexico to Canada that conspiracy theorists claim is part of a nefarious transnational attempt to open America’s borders and merge the United States with its neighbors into a supra-national entity. Paul wrote that the ultimate goal of the project was an “integrated North American Union” — yet one more bugbear of conspiracy theorists — which “would represent another step toward the abolition of national sovereignty altogether.”

In his newsletters, Paul expressed support for far-right militia movements, which at the time saw validation for their extreme, anti-government beliefs in events like the F.B.I. assault on the Branch Davidians and at Ruby Ridge. Paul was eager to fan their paranoia and portray himself as the one man capable of doing anything about it politically. Three months before the Oklahoma City bombing, in an item for the Ron Paul Survival Report titled, “10 Militia Commandments,” he offered advice to militia members, including that they, “Keep the group size down,” “Keep quiet and you’re harder to find,” “Leave no clues,” “Avoid the phone as much as possible,” and “Don’t fire unless fired upon, but if they mean to have a war, let it begin here.”

The closest Paul has come in his public statements to endorsing violence against the government was during an interview in 2007, when he was asked about Ed and Elaine Brown, a New Hampshire couple who had refused to pay federal income taxes. In the summer of that year, they instigated a five-month armed standoff with United States marshals, whom Ed Brown accused of being part of a “Zionist, Illuminati, Freemason movement.” Echoing a speech he had just delivered on the House floor, Paul praised the pair as “heroic” “true patriots,” likened them to Mahatma Gandhi and Martin Luther King Jr., and compared them favorably to “zombies,” that is, those of us who “just go along” and pay income tax.

Finally, there’s Paul’s stance on the most pervasive conspiracy theory in America today, the idea that the 9/11 terrorist attacks were perpetrated not by Al Qaeda, but by the federal government or some other shadowy force. While Paul has never explicitly endorsed this claim, there is a reason so many 9/11 “truthers” flock to his campaign. In a recent YouTube video posted by a leading 9/11 conspiracy group, “We Are Change,” Paul is asked, “Why won’t you come out about the truth about 9/11?”

Rather than answer, say, that the “9/11 Commission already investigated the attacks,” or ask the questioner what particular element of “the truth” remained unknown, Paul knowingly replied, “Because I can’t handle the controversy, I have the I.M.F., the Federal Reserve to deal with, the I.R.S. to deal with, no because I just have more, too many things on my plate. Because I just have too much to do.”

Paul knows where his bread is buttered. He regularly appears on the radio program of Alex Jones, a vocal 9/11 and New World Order conspiracy theorist based in his home state of Texas. On Jones’s show earlier this month, Paul alleged that the Iranian plot to kill the Saudi ambassador on United States soil was a “propaganda stunt” perpetrated by the Obama administration.

In light of the newsletters and his current rhetoric, it is no wonder that Paul has attracted not just prominent racists, but seemingly every conspiracy theorist in America. The title of one of Paul’s newsletter series – the Ron Paul Survival Report – was a conscious appeal to followers of the “survivalist” movement of the 1990s, whose ideology blended white supremacy and anti-government militancy in preparation for what Paul himself termed the “coming race war.”

As Paul told The Times last week, he has no interest in dissuading the various extremists from backing his campaign, which is hardly surprising considering he’s spent three decades cultivating their support. Paul’s shady associations are hardly “bygone” and the “facts” of his dangerous conspiracy-mongering are very much “in evidence.” Paul has not just marinated in a stew of far-right paranoia; he is one of the chefs.

Of course, it is impossible to know what Ron Paul truly thinks about black or gay people or the other groups so viciously disparaged in his newsletters. What we do know with absolute certainty, however, is that Ron Paul is a paranoid conspiracy theorist who regularly imputes the worst possible motives to the very government he wants to lead.