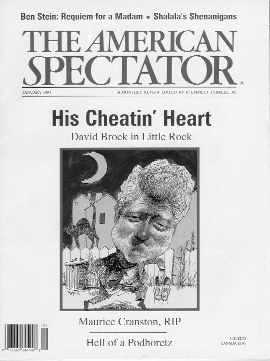 With the Bush administration ending and the Obama administration beginning, it is worth pondering John McCain’s gracious concession speech, giving due consideration to the ways in which the political opposition behaved during the tenures of our last two presidents.
Even though President Bill Clinton governed as a centrist and most of his major accomplishments were ripped from the conservative playbook (balancing the federal budget, passing a major free trade act, enacting dramatic reforms of the country’s welfare program), he inspired a visceral hatred from the base of the Republican Party. Perhaps it was his draft dodging, his inveterate extramarital liaisons, or the fact that he was the first baby boomer president (and one who came to embody everything that traditionalists hate about the 1960s), but Clinton drove a great many conservatives to say and do stupid things.
There was The American Spectator magazine, which published a 2,000-word exposé documenting Clinton’s alleged involvement with a drug running, money laundering and weapons smuggling racket based out of the Mena airport in the backwoods of Arkansas. There was Indiana Rep. Dan Burton, who, in pursuit of his theory that the Clintons were responsible for the death of White House counsel Vince Foster, invited a group of reporters to watch him shoot a watermelon. What this accomplished — other than raising legitimate doubts about Burton’s sanity and proving that fruit explodes when struck by a fast-moving bullet — is anyone’s guess. The culmination of the Clinton hysteria reached its apex with his impeachment, when congressional Republicans launched a fruitless endeavor to kick a popular president out of office over deceptive statements he made regarding a sex scandal.
George W. Bush ran for president on a promise to restore decency and bipartisanship in Washington, and his record as Texas governor lent credence to this assurance. But after the post-election mess in Florida, many liberals decided that President Bush was not “their” president, and for the next eight years they behaved as if he were an unelected king. Their anger took a brief respite in the aftermath of the Sept. 11 attacks, when Bush displayed compassion and tough resolve, leading to sky-high approval ratings. But soon after, it was back to calling the president a “liar,” a “war criminal” and a “dunce,” among other things too nasty to print. It is hard to locate another president in all of American history that has roused such vitriolic hatred from so large a portion of the American people.
The most irresponsible charge that the president’s opponents have raised is that the international effort to depose Saddam Hussein and institute a democratic government in Iraq is not the work of an overwhelming bipartisan congressional majority but rather is “Bush’s war.” This Democratic charge represents a shameful deferral of responsibility, especially when the majority of them initially supported the war.
As soon as Iraq started to come apart, many Democrats divested themselves of responsibility and began making the baseless and irresponsible accusation that the administration had “lied” to them and the American people. These latter-day war opponents would have done well to hear earlier what McCain said when conceding the presidential election: “Whatever our differences, we are fellow Americans. And please believe me when I say no association has ever meant more to me than that.”
For those McCain supporters who chose the Republican ticket on foreign policy grounds, an upside of President-elect Barack Obama’s victory is that Democrats will now be in charge of conducting foreign policy, instead of merely criticizing its execution from the sidelines.
It goes without saying that our country faces some very difficult years ahead, and Americans — regardless of political affiliation — should want Obama to succeed in meeting these challenges. This does not mean conservatives and others who oppose Obama on various and sundry policy issues should keep their mouths shut and fall in line when they disagree — far from it. Democracy depends upon the free exchange of ideas and the hashing out of disagreements.
But there is a difference between constructive criticism that genuinely has the best interests of the country at heart and political opportunism that revels in the failure of one’s opponents. The worst thing conservatives could do is imitate liberals under Bush by declaring that “Barack Obama isn’t my president.”
Obama isn’t even president yet, and it seems that some conservatives would rather imitate the worst excesses of the Angry Left rather than heed McCain’s advice. In the weeks before the election, every cockamamie theory about Obama was trotted out. One prominent conservative blogger speculated that Obama’s book “Dreams From My Father” was ghostwritten by former domestic terrorist Bill Ayers. Another, less prominent one wrote a several-thousand-word post purporting to prove that Obama was not the son of the man he claimed as his father but, rather, the illegitimate child of Malcolm X. Less than 36 hours after Obama delivered his acceptance speech, I received an invitation to join a Facebook group titled “Impeach Barack Obama.”
Every four years, pundits and politicians call for a return to civility and an end to the “divisiveness in Washington.” These pleas have been as successful as Ralph Nader’s perennial presidential campaigns. But just because it is customary for partisanship to take over immediately after a new president takes the oath of office doesn’t mean we should forgo the effort of recommitting ourselves to a more respectful and productive political discourse. The motto of McCain’s campaign was “country first.” As conservatives enter the political wilderness, they can demonstrate their commitment to that principle by not behaving the way so many of their adversaries did during the Bush era.