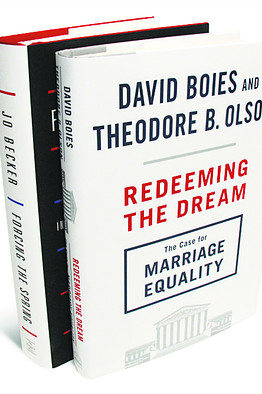 Revising the History of Gay Marriage

In the United States, the public debate over same-sex marriage goes back at least as far as 1970, when two male students at the University of Minnesota attempted to obtain a marriage license. In 1974, PBS aired a groundbreaking debate on the subject featuring Frank Kameny, the first person to legally challenge his firing from a government job due to sexual orientation. In 1993, the Hawaii Supreme Court became the first in the country to declare that denying marriage certificates to same-sex couples violated a state constitution.

But reading two new books about the legal battle to challenge Proposition 8, the 2008 California ballot initiative enshrining marriage as a union between a man and woman in that state’s constitution, one would scarcely realize that there exists this multifaceted and richly populated history. In “Forcing the Spring: Inside the Fight for Marriage Equality,” New York Times NYT reporter Jo Becker writes of a cause that had “languished in obscurity” until 2009, when a 30-something gay political consultant named Chad Griffin established, with film director Rob Reiner, the American Foundation for Equal Rights and recruited the legal dream team of David Boies and Ted Olson. On the first page, Ms. Becker likens Mr. Griffin to Rosa Parks, a ludicrous appraisal that sets the tone for the rest of her tale.

Messrs. Boies and Olson’s quickie trial memoir, “Redeeming the Dream: The Case for Marriage Equality,” shares the grandiose tone of Ms. Becker’s book. The two men, who famously squared off against each other during the 2000 Florida presidential recount, eventually brought Hollingsworth v. Perry, the case challenging California’s gay-marriage ban, all the way to the Supreme Court. In so doing, they ignored warnings from the gay legal establishment, which, partially in light of the court’s conservative majority, preferred a more cautious, state-by-state strategy.

As is perhaps inevitable in legal histories recounting the path of a case from the federal district level to the Supreme Court, the narrative in these two books quickly becomes repetitive. This is all the more so when the subject is same-sex marriage, a topic that has been endlessly debated in the culture and played out in multiple courtrooms over the past two decades, with practically identical arguments marshaled for and against it every time.

For all their legal brilliance, Messrs. Boies and Olson were essentially working from a script that had been written by other people. I am thinking here specifically of individuals like Evan Wolfson, founder of Freedom to Marry, who over 30 years ago advocated the then-heretical idea in his Harvard Law School thesis, as well as a trio of center-right gay journalists— Bruce Bawer, Jonathan Rauch and Andrew Sullivan —who crafted eloquent, pro-equality treatises in mainstream media beginning in the late 1980s.

Given the high-stakes drama of Hollingsworth v. Perry and the delicious irony of Messrs. Boies and Olson working together, it’s not hard to understand why Ms. Becker chose it as the focus of her account. Yet both “Forcing the Spring” and “Redeeming the Dream” suffer from the same anticlimactic ending: The court ultimately decided to uphold a Ninth Circuit ruling that overturned Proposition 8 on standing grounds and refused to consider the case on its merits, thus depriving Mr. Griffin’s organization the sweeping decision legalizing gay marriage that it had sought.

That anticlimax affects not only the books’ narrative arc but, more crucially, their collective thesis: that Hollingsworth v. Perry was the most significant event in the legal history of gay marriage. That distinction belongs to another case, United States v. Windsor. In Windsor, decided the same day as Hollingsworth, the court overturned the Defense of Marriage Act, which prohibited the federal government from recognizing same-sex marriages performed in states where the practice is legal. Windsor wasn’t as ambitious as Hollingsworth in that it only sought to overturn a federal statute, not secure same-sex marriage nationwide. But it has had far more of a national impact. Not only did the victory grant federal recognition to every gay marriage registered in a state that recognizes such unions, but the decision has since been cited by multiple state courts in striking same-sex marriage bans from the books. Hollingsworth reversed Proposition 8—no small feat considering that California is the country’s most populous state–but hardly the sort of victory that merits the mantle of “revolution,” as Ms. Becker garlands it.

Both books also suffer from factual errors. Ms. Becker misidentifies Harvey Milk, the slain San Francisco supervisor, as the first openly gay elected official in the United States. (That honor belongs to Kathy Kozachenko, elected to the Ann Arbor, Mich., City Council in 1974; and at least two other openly gay officials were elected before Milk.) The virulently antigay Westboro Baptist Church hails from Kansas, not Florida. In a revealing instance of dispensing credit where it is not due, Messrs. Boies and Olson laud Democratic New York Sen. Kirsten Gillibrand for leading the repeal of the military’s “Don’t Ask, Don’t Tell” policy, when the bill that put an end to it was co-sponsored by retired senator Joseph Lieberman, a Democrat, and Susan Collins, a Republican.

But these are quibbles compared with the distortion of history. Messrs. Boies and Olson ran a savvy media operation, thrusting their case and themselves into the national spotlight. That they would exaggerate the importance of their work is hardly a surprise. That Ms. Becker endorses their account makes her history more the product of an admiring stenographer than that of a critical reporter.