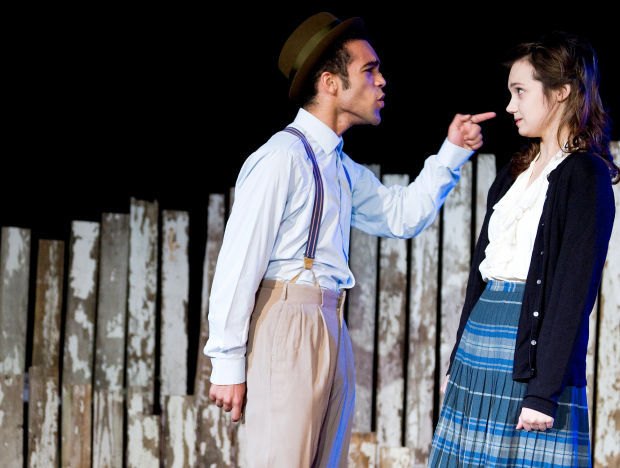 Review of "Anne and Emmett"

The proposition “what If” has produced some wonderful works of theater. Michael Frayn’s “Copenhagen” imagines a conversation between the physicists Niels Bohr, Werner Heisenberg and Bohr’s wife, Margethe, in which Heisenberg’s collaboration with the Nazis becomes a source of consternation for his mentor Bohr, a Jew. The three characters knew each other intimately, but the conceit of the play – a three-way meeting of the minds in some ethereal time and space – challenges reality.
“Copenhagen” won the 2000 Tony Award for best play and was universally acclaimed.
But “what if” also can inspire a hackneyed product, which pretty much sums up the one-act play “Anne and Emmett,” written and produced by Janet Langhart Cohen, the former model, BET television personality and wife of ex-Secretary of Defense William S. Cohen.
“Anne and Emmett” creates a conversation between Anne Frank, author of the eponymous diary, and Emmett Till, the black teenager who was tortured and killed at age 14 in Money, Miss., for whistling at a white woman. Mrs. Langhart Cohen decided to write the play after a white friend pooh-poohed her book idea about “growing up in apartheid America,” at which point, her husband recently told The Washington Post, she returned home and wrote the play on her BlackBerry. It shows.
As Anne lived and died in Europe during World War II and Emmett’s odyssey in the American South did not occur until the 1950s, Mrs. Langhart Cohen has the two characters meet in “memory.” If the concept of “Anne and Emmett” is contrived, the dialogue is even more unbearable, sounding as if it were written specially for an after-school TV special.
“We had a good life until Hitler and the Nazis came to power,” Anne tells Emmett.
“I guess he showed Hitler something about his master race,” Emmett says of Jesse Owens, the Olympic gold medalist whose victories in track and field at the 1936 Olympics in Berlin prompted the Fuhrer to walk out of the stadium rather than shake the hand of a black man.
The play’s original music, which glides from klezmer to Southern gothic, was composed by a prodigy named Joshua Coyne and provides a welcome respite from the Up With People speechifying.
Unlike Anne Frank, whose diary became an international best-seller, the character of Emmett allows Mrs. Langhart Cohen some creative liberty, as we know far less about him. His words haven’t been translated into nearly 70 languages and memorized by generations of schoolchildren, nor has his life been dramatized for television, film and theater.
Leo Breckenridge, who played Emmett in the production I saw (the play is double-cast with two pairs of young actors), therefore, has more freedom in making Emmett his own, and he does so with verve and compassion. Amal Saade, on the other hand, performs an impersonation of a well-trod character, and while she could have made Anne a mousier and more modest figure, she goes for the easy portrayal of an overly earnest and preachy racial-religious mediator.
Mrs. Langhart Cohen can’t help using her characters to make a cheap political point, using Emmett to voice bewilderment at the practice of Holocaust restitution and the absence of reparations for slavery. (This conversation apparently takes place in the present day.)
In the former case, identifiable victims have received compensation from the actual perpetrator of the crime against them: the German government. Slave reparations are a far more nebulous proposal, as they would be dispensed to the distant ancestors of slaves (and, in some instances, people who have no slave ancestry or whose forefathers came to the United States after slavery was abolished).
“Anne and Emmett” was to be performed June 10 at the U.S. Holocaust Memorial Museum before an invitation-only audience. That production was canceled abruptly, however, when an octogenarian white supremacist entered the building with the intention of massacring as many people as possible. He managed to kill one man, security guard Stephen Tyrone Johns. The production went on at George Washington University two night later.
Mr. Johns was black, a fact that went unspoken during the night of the performance but clearly was on the minds of everyone in the audience. The incident cast a pall over the production, as security guards checked every guest with metal-detector wands as they entered the theater. Yet the heartbreak of two days prior was as edifying as it was a cause for sorrow. I need not recount here the complicated history of blacks and Jews. Suffice it to say that the relationship has been difficult, marked by mutual sympathy but just as often by suspicion, envy and – at its worst – episodes of violent confrontation.
This fraught rapport, stoked by opportunists on both sides, has been a source of endless frustration for the vast majority of blacks and Jews, as the discord is essentially illogical. Both communities have been the targets of government-promoted hatred and murder, (Anne Frank and Emmett Till being just two of the better-known victims), and the historic commonalities between blacks and Jews are of much greater weight than their superficial differences. In this sense, the performance of this play in the shadow of the death of a black man who gave his life in defense of the Holocaust museum was less eerie than it was inspiring.
If last week’s tragedy can convince blacks and Jews of their natural kinship – “Anne and Emmett” playing its own small part in achieving that ecumenical goal – then the ultimate sacrifice of Stephen Tyrone Johns will prove to be ever the more valiant.