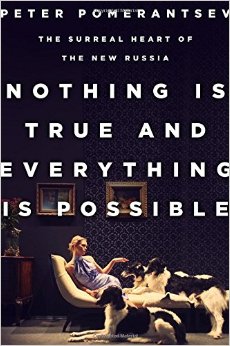 Nothing Is True and Everything Is Possible: The Surreal Heart of the New Russia

As a television producer living in Moscow during the early years of the 21st century, Peter Pomerantsev witnessed many strange things. There was the visit to Chechnya to meet the world’s biggest boy (who, at age 7, could barely fit in a bath tub). There was the string of suicides by young models, plucked from former Soviet hinterlands to be the playthings of aging tycoons, who got caught up in a  Scientology-like cult. But the most extraordinary story of Pomerantsev’s time in Russia concerns the country’s politics, a surreal tale that the author, a producer of reality television, is especially qualified to tell.

For nearly a decade, Pomerantsev had a front-row seat at the “great Kremlin reality show” that is today’s Russia. The star of this program is President Vladimir Vladimirovich Putin, “the ultimate sugar daddy” whose shirtless horseback posturing before the camera serves as a “love letter” to the millions of fatherless women who view him as a sex symbol. Through a postmodern form of mythmaking less interested in extolling Russia than in confusing and faking out adversaries, the Putin regime has created a world where “nothing is true and everything is possible,” a nonsense state in which Moscow has license to crush democracy at home and expand its borders abroad.

Television is the perfect medium through which to explore the Russian condition of manufactured consent. It is entirely within the state’s purview, and most Russians obtain their news by watching TV. Pomerantsev relates his odyssey in a series of vignettes evocative, in tone, of both Dostoyevsky and Roald Dahl. His literary style reads at times like a fever dream. “Voronezh, Minsk, Karaganda, Alma Ata, Rostov—these are the great wells of beauty, raw girl crude to be pumped and refined,” he writes of the barren lands poured over by rapacious fashion scouts. A party at a lavish nightclub hosted by a young entrepreneur features a “local madman” presented to the hip crowd as “a great Russian prophet,” a scene that echoes Tom Wolfe’s Radical Chic, with the “mendicant vision for the future of” Russia replacing the Black Panther revolution.

If there’s a villain in this book, it is not Putin but Vladislav Surkov, the president’s “man behind the curtain.” Part vizier, part culture minister, and part theater director, Surkov was deputy prime minister from 2011 to 2013. But his ongoing duties encompass more than any official title could convey. He is the “political technologist” responsible for the concept of “sovereign” or “managed” democracy—a post-modern apparatus of fake parties, fake parliaments, and fake dissidents. Surkov extols “conservative” values and decries moral relativism. Yet when Washington slapped him with sanctions for his complicity in the Crimean annexation, he shrugged, saying, “The only things that interest me in the U.S. are Tupac Shakur, Allen Ginsberg, and Jackson Pollock.”

Surkov may be a pithy commentator, but his achievements are deadly serious. The man’s “genius,” Pomerantsev writes, is to “use the language of rights and representation to validate tyranny.” This official cynicism now permeates Russian life. When Pomerantsev asks a pro-Putin cartoonist how he defines himself politically, the young artist laughs that he is a “liberal,” and notes that the word, in today’s Russia, can “mean anything.” Pomerantsev writes, “The Kremlin’s idea is to own all forms of political discourse, to not let any independent movements develop outside of its walls.” The state throws support to transgressive artists while simultaneously funding the Orthodox Church, whose leaders protest those very artists’ exhibitions. “Liberal” newspapers and television channels (invariably owned by oligarchs tied to Putin) occasionally cover protest movements, not out of civic duty but to protect turf and weaken rival forces in the Kremlin sphere. Pomerantsev devotes a chapter to the saga of a young businesswoman fighting phony charges of tax evasion, whose cause was taken up by media outlets tied to bureaucratic rivals of the tax office who were no less corrupt. When members of the feminist punk-rock collective Pussy Riot staged an anti-Putin demonstration in a Moscow church, what angered the Kremlin was not so much the content (“Mother of God, Chase Putin away”), or their nom de chanson. It was that the group was created wholly independent of state structures and summoned a large Western following.

The Soviet propaganda of the Cold War cannot compare with the sophistication of the disinformation apparatus in today’s Kremlin. What makes the Russian regime so dangerous and confounding is that it is “the West reflected through a crooked mirror,” as a European development consultant tells Pomerantsev. Russian leaders embrace the West’s material benefits (by coopting Western business and political figures) while making the case against its liberal values. The Russians have been expert at manipulating world opinion through everything from the Kremlin-run television news network Russia Today (“less about arguing against the West with a counter-model as in the Cold War, more about slipping inside its language to play and taunt it from inside”) to the saga of Edward Snowden.

It is hard to think of another work that better describes today’s Russia; Nothing Is True and Everything Is Possible may very well be the defining book about the Putin era. This might seem like excessive praise for a relatively short, non-academic memoir by a reality-TV producer now living in London, but it is justified by the author’s gimlet eye and reportorial skill. The Russia Pomerantsev paints is a morally corrupt bizarro world that actively discourages integrity of any kind. “To believe in something and stand by it in this world is derided, the ability to be a shape-shifter celebrated,” he writes. Few and far between are the people of genuine goodwill and humanity who see through the Kremlin’s lies; still fewer are those willing, in the words of the late Vaclav Havel, to “live in truth” as a form of resistance.