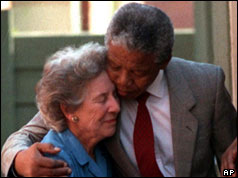 During a heated exchange in the apartheid-era South African parliament, a senior government minister scolded Helen Suzman, then the lone member of the body that opposed the racially discriminatory system.
As a parliamentarian, Mrs. Suzman was a perpetual thorn in the side of the regime, frequently asking questions that exposed the horrors of apartheid, and traveling the world to expose its myriad injustices. “You put these questions just to embarrass South Africa overseas!” the senior government minister shouted.
“It is not my questions that embarrass South Africa,” Mrs. Suzman said. “It is your answers.”
This exchange neatly summarizes the heroic career of Mrs. Suzman, who turned 90 on Wednesday. Born Helen Gavronsky to Lithuanian Jewish immigrants, she was a lecturer of economic history at the University of the Witswatersrand in Johannesburg. In 1953, she made the leap to politics by running for parliament under the wing of the United Party, then the liberal opposition to the governing Nationalists.
In 1959, however, Mrs. Suzman bolted from the United Party because she could no longer tolerate its feckless opposition to apartheid. She helped start the Progressive Party and between 1961 and 1974, by virtue of her being its only elected representative, was the sole anti-apartheid Member of Parliament.
Over her 36 years in office, she regularly visited black townships and political detainees, earning the saintly epithet, “Our Lady of the Prisoners.” She provided fodder for anti-apartheid forces around the world via the “embarrassing” answers she forced the government into giving. The notorious president of South African, P.W. Botha, once called her a “vicious little cat.”
Mrs. Suzman is a first-class wit. While visiting the Soviet Union, the apartheid government’s minister for law and order remarked that she should stay there. “You would like it here,” Mrs. Suzman wrote back in a postcard. “Lots of law and order.”
Many members of the Afrikaner-dominated Nationalist Party had been Nazi sympathizers during World War Two. “Go back to Israel!” they shouted at her. But this bullying never cowed Mrs. Suzman. During one debate, a National Party member asked where her ancestors had been while his were bringing the Bible to Africans in the early 19th century. They were busy writing it, she told him. Once she encouraged a government minister to see the misery of the crowded black townships for himself, cautioning, however, that he ought go “heavily disguised as a human being.”
The end of apartheid did not spell the end of authoritarianism in southern Africa. In neighboring Zimbabwe, Robert Mugabe is still in power after 27 years of authoritarian rule and Mrs. Suzman has been a persistent critic. She also voices her frequent consternation with the African National Congress, particularly for its inability to tackle the country’s massive violent crime problem, its kids-glove approach to Mr. Mugabe, and its inept handling and at times outright denial of the AIDS crisis. “It’s very depressing at the moment,” she said of the state of South African politics when I visited her Johannesburg home last year.
Mrs. Suzman does not just limit herself to voicing concern about the state of liberty in Africa. A secular Jew, she has long been concerned about the fate of Israel. When a group of Jewish South Africans, led by the country’s minister of intelligence, Ronnie Kasrils, who has praised and visited with the leaders of Hamas and compared the Jewish State to Nazi Germany, approached her to sign a petition denouncing Israel, she would have none of it. “Go jump in the lake,” she told them.
Following President Ahmadinejad’s speech at Columbia University, one of the many institutions which bestowed Mrs. Suzman with an honorary degree, she wrote: “I am disgusted that its president, Lee Bollinger, should have provided a platform for Iranian President Ahmadinejad, who has more than once pronounced that Israel should be ‘wiped off the face of the earth.’ Does President Bollinger not know the difference between hate speech, which incites violence, and freedom of speech?”
A former member of parliament, Raenette Taljaard, who is the current head of the Helen Suzman Foundation, says that her organization’s namesake, “could have simply done what every white South African did: opt out.” The mere act of walking out the door every morning to fight an unjust regime was an activity the vast majority of the country’s whites could not be bothered to do. Mrs. Suzman’s life was one spent bearing constant and vigilant witness to evil.
Unlike many of the ANC’s white critics, Mrs. Suzman is not tainted by the associations with the apartheid regime and so her frequent criticisms of the ruling party are especially nettlesome. She stands on firm, moral ground. It is for this reason that Ms. Taljaard believes those in power are “tactically forgetting her” and other liberal critics of apartheid who have now turned their guns on the failures and ineptitude of the ANC.
When the Apartheid Museum in Johannesburg was launched several years ago, it barely mentioned Mrs. Suzman. She had to campaign to see that figures like the novelist Alan Paton, his anti-communist and anti-apartheid Liberal Party, and the English-language press and universities were also commemorated.
Explaining why she left parliament in 1989, Mrs. Suzman told the New York Times, “It’s a good thing to go when people still want you to stay, instead of having them say, ‘How are we going to get rid of her?'” Luckily for South Africans and all defenders of liberty, she is still here.