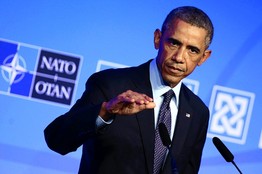 A Monroe Doctrine for NATO

Speaking in Tallinn, Estonia, President Barack Obama earlier this month affirmed America’s commitment to defend NATO allies in Eastern Europe. The reassurance was welcomed, particularly by the Baltic republics, which have been feeling the heat from Russia’s invasion of Ukraine. Yet Mr. Obama’s speech telegraphed an unintended message to Moscow: Keep Crimea and continue violating Ukraine’s sovereignty—just don’t cross the line west into NATO territory.
Ukraine and several other strategically important sates aren’t NATO members and therefore not covered by Article 5 of the Atlantic Charter, under which an attack on one member is considered an attack on all. How can Washington forestall further Russian encroachments in such regions? American history provides an instructive precedent for how to prevent foreign meddling in vulnerable states: the Monroe Doctrine.
Formulated by Secretary of State John Quincy Adams in 1823 during the presidency of James Monroe, the doctrine stipulated that the U.S. would view attempts by European colonial powers to interfere in the affairs of the newly independent countries of Latin America as acts of aggression.
Ever since Monroe enunciated it in his State of the Union address that year, historians and leftist Latin American politicians have besmirched the doctrine as the ideological essence of Yanqui imperialism. But by declaring itself hegemon of the Western hemisphere, the U.S. was doing precisely the opposite: creating space for Latin American nations to choose their own destiny, free of foreign intervention. And the doctrine worked: Latin America didn’t face nearly as much colonial aggression as before.
NATO today should apply something like the Monroe Doctrine to European states that geographic misfortune has placed outside the Alliance but whose sovereignty is essential to a Continent “whole, free and at peace.” One way to formulate the principle would be to announce that attempts by outside powers to subvert the sovereignty of these states will be considered, in Monroe’s words, “as the manifestation of an unfriendly disposition” toward the Western Alliance.
Practically, this would offer everything just short of an Article 5 commitment to put NATO forces on the ground to defend against attack. Had such a policy been in place before Vladimir Putin launched his Ukrainian adventure, it would have meant immediate and crushing sanctions on Russia, full-scale diplomatic isolation and the supply of lethal aid to Kiev.
Had the West made clear early in Russia’s attempt to dismember Ukraine that such moves would come at a prohibitively high cost, then the entire crisis might have been averted. By contrast, likening the borders of NATO territory to a “trip wire” has the perverse effect of emboldening bad behavior on the other side.
The countries caught between NATO and Russia—Ukraine, Georgia and Moldova, all of which have sought, to varying degrees, membership in NATO—exist within a dangerous gray area, zones of contestation between East and West. They deserve something better than to be told “Good luck, you’re on your own.”
Leaving these countries outside the West’s defense architecture invites Russian aggression. With 20% of Georgia, the breakaway Republic of Transnistria, and the Crimean Peninsula all under its belt, Russia has indefinitely forestalled these nations’ progress toward NATO membership, since the Alliance doesn’t accept new members with open border disputes.
While extending NATO in the near future may not be in the cards, there should exist a strategic framework for candidate states, short of full membership, which would help reduce the ambiguity inherent in their security environment. It would go beyond the current Membership Action Plan mechanism, which provides a path of reform to aspirant nations but does little to ensure their security against attack.
At stake is Western credibility. While not a treaty commitment, the 1994 Budapest Memorandum signed by the U.S., U.K. and Russia did offer security guarantees to Ukraine in exchange for Kiev giving up its nuclear weapons stockpile to Moscow. The evident worthlessness of those guarantees will not only make it more difficult to convince other nations to dispense of their nuclear arsenals, but signals that Western governments aren’t serious about enforcing agreements.
Last year, in a speech before the Organization of American States, Secretary of State John Kerry proclaimed that the “era of the Monroe Doctrine is over.” In so doing, he broke with every administration since Monroe, which all viewed the Western hemisphere as off-limits to rival powers. It was of a piece with Mr. Kerry’s characterization of Moscow’s actions as belonging to the 19th century. Yet in resisting Russia’s neo-imperialism, Washington would do well to resuscitate a 19th-century doctrine of its own.