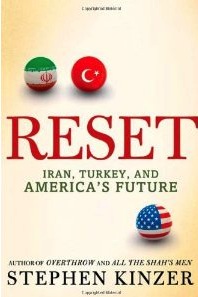 Reset: Iran, Turkey, and America’s Future
Stephen Kinzer (New York: Times Books, 2010)
Stephen Kinzer’s Reset: Iran, Turkey, and America’s Future might be a must-read if we lived in an alternate universe. As with most easily offered solutions to long-running problems, its general proposition is ostensibly alluring. To navigate its way through the intractable morass of Middle Eastern politics, Kinzer writes, the United States should form alliances with two strategically crucial Muslim countries: Turkey and Iran. Such a “partnership” would be “the tantalizing ‘power triangle’ of the twenty-first century.” Furthermore, the US should trade in an older pair of alliances with the status quo regional powers of Saudi Arabia and Israel, whose usefulness has grown thin now that the Cold War is over.
It would of course be wonderful if the United States could find a way to forge better partnerships with Turkey and Iran, since doing so might one day bring about the stability, economic productivity, and greater political freedom that Kinzer says he wants to see blossom across the Middle East. But as with any alliance, a prerequisite for such an entente is shared policy goals, never mind values. Unfortunately, we live not in the world of Stephen Kinzer’s imagining, but one in which a group of apocalyptic, terrorist-sponsoring mullahs rule Iran and increasingly emboldened Islamists hold the balance of power in Turkey. As long as this is the case, Kinzer can argue all he likes for a Washington-Ankara-Tehran axis, but one will never transpire.
None of this is to say that five or ten years down the line Iran’s repressed Green Movement might not replace the mullahs with a government that treats its own people humanely and doesn’t foment war and chaos across the region. Or that the ever-prideful Turks, realizing that their failure to move further toward EU membership is as much their own fault as it is the fault of Europeans, might not reconsider their recent overtures to rogue regimes in Iran and Syria, get over their aversion to acknowledging the Armenian genocide, and stop supporting Hamas against Palestinian moderates. Were both revolutions to unfold—and it would require nothing less than revolutions (not necessarily violent) in both countries for such dramatic changes to take place—then Kinzer’s strategic vision might have some heft to it. Yet as things currently stand, a scenario in which the US replaces Saudi Arabia and Israel for Iran and Turkey is fantastic, to say the least, and calling upon the United States to effect such policy changes regardless of the nature of the governments in Tehran and Ankara is delusional, if not downright dangerous.