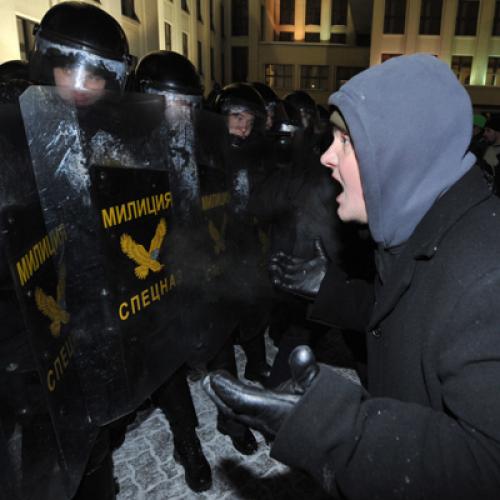 A dispatch from inside President Lukashenko’s brutal election crackdown.

Minsk, Belarus—On Sunday, Belarusian President Alexander Lukashenko was reelected to five more years in office. He garnered 80 percent of the vote, according to official numbers. In past elections, Lukashenko, often called “Europe’s last dictator,” all but prevented anyone from directly challenging him. But, this year, he earned widespread recognition for orchestrating an election that was “much freer than the past,” featuring all the trappings of an open and fair process. There were nine opposition candidates, each of whom received two, uncensored, 30-minute campaign segments on state television and radio. There was a televised presidential debate (albeit one which Lukashenko declined to participate in). And there were campaign events for his rivals that weren’t busted up by authorities (though they did have to notify the government in advance).
But the concessions Lukashenko made were ultimately meaningless. They were carefully crafted so that the race merely seemed democratic. I was in Minsk for the vote and learned of the lengths Lukashenko went to in order to assure he would win—and to assure that critics would be put in their place after the vote. Far from democracy, this was the epitome of despotism. “With such small steps to democracy,” opposition candidate Viktor Tereshenko told me, “it will take a minimum of fifty years before we are fully democratic.”

The run-up to the election gave plenty of reason to doubt that the vote would be conducted fairly. Because the government controls virtually all of the media, the opposition was regularly depicted on television “as thieves, tax cheats, and ham-handed,” according to one observer. And the head of the Central Election Commission, Lidiya Yermoshina, is already under European Union sanctions for presiding over a series of sham elections.
It was no surprise, then, that the two leading opposition candidates, Uvladizmir Neklayev and Andrei Sannikov, held a press conference on Saturday to announce they had received multiple reports of electoral fraud. They called on their countrymen to join them the following evening in October Square, where opposition rallies have traditionally been held. The candidates were vague about how they would proceed Sunday night, but, when a reporter from a state TV company asked Neklayev why he was encouraging his supporters to act violently, the candidate responded: “We never use violence. Your employers have always used violence and force.”
On Sunday, when Lukashenko went to cast his vote, he brushed off mention of the protest. “There will be nobody at the square today,” he declared. That evening, it appeared at first that the president had been right. A small crowd crammed onto a street corner to hear opposition candidates shouting desperately into a megaphone, their voices drowned out by piped-in Belorusian pop music. The group’s spirits were low, likely because of the sparse attendance and cold night air. But then, suddenly, the event gained steam, perhaps energized by the news that Neklayev had been beaten unconscious by a group of policemen on his way to the event and was now in the hospital. Seemingly out of nowhere, the crowd mushroomed into the tens of thousands, poured onto Minsk’s main drag, and stopped traffic with an impromptu anti-Lukashenko parade. The protesters made their way through downtown Minsk to Independence Square, a plaza buttressed by massive government buildings that house the parliament and Central Election Commission headquarters.
At this point, there was no sign that the regime planned to end the protest. Invigorated by the crowd, one opposition candidate announced that the Lukashenko’s rivals were demanding to “negotiate” with the regime about forming a “caretaker government.” Spotting the dark figures of state security personnel standing on the roof of parliament, one clever protester started a chant of “Jump Down!” Others shouted, “The city is ours!” Before long, the mass of people swelled to the entrance of parliament, and, not long after, some began breaking the glass doors.
But columns of helmeted riot police, the spetsnaz, were waiting for the protesters behind the entrance. In fact, while the crowd had chanted and marched, the police had surrounded the square and were lying in wait. What had seemed like unusual silence and inaction on the part of the regime—why were they letting so many people clog the main avenue? why was the crowd allowed to mass outside major government buildings?—was, apparently, a trap.
A column of spetsnaz stormed past me, throwing an elderly man to the ground and beating people—all of them unarmed—mercilessly. Presidential candidate Vital Rymasheuski staggered past me assisted by supporters, his hands covering a bloody gash on his forehead. I witnessed one police officer repeatedly club a person who was trapped against a wall. The sound of truncheons slapping plastic shields was the clear signal that unrelenting violence was only a few seconds away—and that one should run.
Surrounded, a small crew of opposition leaders regrouped around the base of the Lenin statue in the center of the square. They huddled around their public address system and implored the assembled to stay. “The destiny of the country is decided today!” cried presidential candidate Rygor Kastusev. But his cries fell on increasingly deaf ears, as the dejected crowd slowly made an exodus home.
Scattered sweep-up operations by the police, targeting hold-outs in or near the square, continued over the course of the next hour. But protesters weren’t the only ones the police were eyeing: There was an unprovoked attack on a group of journalists, myself included, as we stood outside the door of our hotel. Shoved against a Christmas tree, I pushed my way into the hotel lobby, where journalists, along with a group of international observers, were made to wait while police stood guard outside the door.
At the end of it all, the spetsnatz had dispersed a crowd of several tens of thousands of people within two hours. Reports indicate that many people were injured. But Lukashenko’s regime didn’t stop there. The government made numerous arrests on Monday: According to The New York Times, six presidential candidates were taken into custody, along with more than 600 young men, many of them civil society activists and people involved in the opposition campaigns. Neklayev was taken from the hospital where he was being treated—and his whereabouts remain unknown. Meanwhile, faced with complaints from Western observers and domestic critics at a press conference, Lukashenko scoffed. “We did just as you demanded,” he said. “What complaints could you have?”