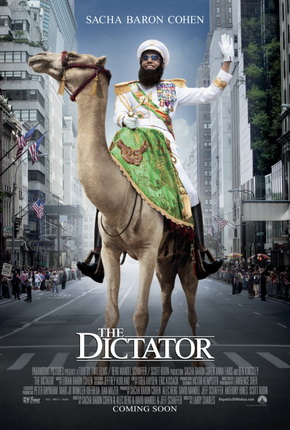 Is "The Dictator" Racist?

Even before it hit theaters, Sacha Baron Cohen’s “The Dictator” – a gross-out parody of autocrats and the Western leftists who romanticize them – was met with cries that it’s racist.
“Judging from the trailer,” Palestinian-American comedian Dean Obeidallah declared in a commentary for CNN.com, Baron Cohen’s portrayal is “essentially the same as white performers in blackface portraying black people in buffoonish negative stereotypes for the enjoyment of white America.” Max Blumenthal, a writer for the Lebanese newspaper Al-Akhbar, tweeted that the film’s trailer was “wartime propaganda cleverly disguised as an Orientalist minstrel show.” (That this criticism comes from a Jew who writes for a pro-Hezbollah paper, and starred in an adulatory documentary broadcast on Iranian television, no less, is particularly rich.) Foreign Policy’s Joshua Keating, who actually saw the film before commenting, condemned it for doing “everything in its power to confirm a jingoistic and borderline racist view of non-Western cultures.”
The hostile reaction is not surprising. But it says more about the critics than it does the film itself.
“The Dictator” opens with a speech from the redundantly titled Admiral General Aladeen, supreme leader of the North African nation of Wadiya, which is under international scrutiny for its clandestine nuclear program. With his ridiculous outfits, female bodyguards and caprice in ordering the execution of aides for the slightest of perceived insults, Aladeen is based primarily upon the late Libyan leader Muammar Gadhafi. Aladeen defiantly announces that the dreaded Western imperialists will never stop Wadiya’s nuclear program. But as he reaches the line explaining that the program is “peaceful,” he can’t keep himself from laughing.
And so here we have a commentary on the Western “debate” over the purpose of Iran’s nuclear project. For years, allegedly serious people – The New Yorker’s Seymour Hersh, University of Michigan Prof. Juan Cole, et al – have argued that the Islamic Republic’s nuclear program is intended for peaceful purposes. General Aladeen’s inability to keep a straight face while sputtering out his obvious lies is not just a bemused reaction at his own deceptions, but a reflection of his amazement that so many Westerners will no doubt parrot them.
Is “The Dictator” racist? “It’s hard to get past the fact that most of the film’s comedy derives from a British actor playing a crude Arab stereotype,” Keating writes. Aladeen is a stereotype not of Arabs or Muslims writ large, but the megalomaniacs who have ruled over them for so long. Nor is his cultural milieu so distinct.
“The ‘Wadiyan’ language is clearly mock Arabic,” Keating writes – though it’s actually bastardized Hebrew. While Aladeen hails from the Middle East, he is a composite of several dictators – Gadhafi, Idi Amin, Hugo Chavez, Mahmoud Ahmadinejad, Kim Jong Il (the film’s dedicatee ) – not all Arab or Muslim. I even recognized a little of the obscure Belarusian President Alexander Lukashenko, which I’m sure wasn’t intended, but nonetheless indicative that all dictators, regardless of hue, share a common quality: delusions of grandeur.
Ignoring this complexity, critics bemoan the film’s lack of racial purity in its casting. “The principal Wadiyan characters are played by non-Middle Eastern actors,” Keating complains. Obeidallah dismisses “Cohen, who is not of Arab heritage,” later writing, “If you are going to mock and ridicule us for profit, can you at least cast Arabs and Indians to play us?” Should the Egyptian Omar Sharif have played the Russian Dr. Zhivago? Was it inappropriate for Ben Kingsley to portray Gandhi even though he is only Indian on his father’s side? This criticism completely misses the universal aspiration of the best humor, which is to make people laugh regardless of their racial or religious background. Surely, the Libyans who suffered for four decades under Gadhafi’s heel would be delighted that Hollywood is making a film that ridicules him.
The other principal target of Baron Cohen’s humor is the naive Western leftist, one of whom, a sprightly young Brooklyn food co-op manager named Zoey, falls in love with Aladeen. Though production on the film started before the emergence of Occupy Wall Street, one can’t help but see Zoey’s patronizing political correctness as a commentary on that movement. Hanging on the wall of her co-op is an iconic Shepard Fairey poster of Barack Obama, which, four years ago, seemed vaguely fascistic. Now, juxtaposed alongside propaganda venerating a fictitious dictator, Fairey’s inspiration is frighteningly clear.
Critics had less of a problem when Baron Cohen embarrassed southern American Christian rubes – always a fair target – as he did in “Borat” and “Bruno.” But now the tables have turned and his targets are Brooklyn hippies and Muslim terrorists. And that the man making the jokes is Jewish – with, heaven forfend, known Zionist sympathies – frustrates the politically correct even more.
“It’s hard to escape the feeling that Cohen is not so much mocking Arab dictators as the cultures and countries that produced them,” Keating concludes. While Aladeen’s anti-Semitism may seem farcically extreme (his playing a Munich Olympics-themed video game in which yarmulke-clad sportsmen cry “Oy Vey!” as they’re shot ), it reflects a depressing reality: The Saddams and Gadhafis did not come from nowhere; they emerged from societies suffering from deep strains of racism, misogyny, conspiracism, and a raft of other social pathologies. Those who genuinely want the peoples of the Middle East to succeed would at least acknowledge and occasionally ridicule these failings, rather than attack the messenger.