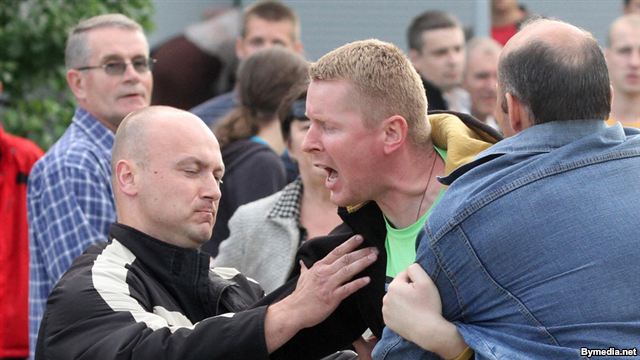 In Minsk, Fighting Democracy with Disco

MINSK — Belarusian President Alyaksandr Lukashenka has used most of the instruments in the dictator’s toolbox to repress his people. He’s beaten and jailed political opponents. He’s thrown student activists out of university. He’s established a monopoly on television and radio, and continually harasses the handful of independent journalists who work here.
On the evening of June 29, he employed a novel weapon: disco music.
This evening, over a thousand people were expected to converge on October Square in downtown Minsk as part of the latest in a series of weekly, Internet-driven protests. As the Belarusian economy faces the worst crisis since the early 1990s post-Soviet shock, these spontaneous, nonexplicitly political protests have entered their fifth week.
Every Wednesday at 7 p.m., in cities across the country, groups of people gather in central squares. The protests are not organized by any opposition party or civic group; there is no political signage on display. No speeches are given; no chants are repeated. Participants merely express their solidarity by clapping.
These humble assemblies are the first spark of public opposition to emerge in Belarus since the widescale crackdown that followed the aftermath of December’s presidential election, which Lukashenka won with an improbable 79 percent of the vote and which outside observers claim was fraught with irregularities. Last week, the government detained more than 450 people across the country.
Aware of the plans to hold an unregistered demonstration in October Square this evening, the regime announced that a government-sponsored youth organization would hold a disco in the plaza. At first, it appeared that neither the protest nor the hastily arranged concert would take place, as a downpour began around 4:30 p.m. But as the skies began to clear, people started coming to the square.
As I made my way toward the city center, I noticed that the police presence, always more noticeable in Minsk than in any other city I’ve visited, was unusually heavy. Metal gates had been put up around the square hours earlier, and some Belarusian hip-hop group had taken the stage. Plainclothes policeman, not doing a very good job of disguising themselves, were in heavy attendance and dispersed throughout the young crowd.
Then, right when the clock struck 7, a group of several hundred people standing on the sidewalk outside the gates started clapping while making their way down Nezavizimosti Boulevard, Minsk’s main drag.
Immediately, a police officer with a bullhorn told them to disperse. As the group of several hundred people slowly made its way down the street, doing nothing more than clapping for about 30 seconds every two minutes, more and more plainclothes policemen began to appear. Though they wore no official uniforms, they bore the obvious hallmarks of the “undercover” thug: clean-shaven, muscular, buzz cuts, and scowls. Many of them were holding hand-held cameras to record just exactly who had defied the regime by deciding to take part in the demonstration.
I asked a 16-year-old girl, Nikita, if she was afraid of being arrested.
“No,” she told me. Why? “It’s normal.”
Soon after the mass of people — now numbering somewhere in the hundreds — had passed the square, police began to randomly rough up demonstrators and shove them into waiting buses and vans. As the group slowly snaked its way around a street corner in the direction of the State Theater of Opera and Ballet, more and more people were seized, occasionally punched, and thrown screaming into vehicles waiting patiently for their human cargo. After one particularly brutal seizure, two agents boastfully shook hands.
Amid this unprovoked violence, the crowd remained remarkably calm. No one tried to fight back. The only signs of resistance came when police, for no reason other than to make an example and instill fear in others, would beat someone about the body with their fists. There was no protest from the demonstrators at what was being done to their comrades; after all, this is Belarus, where taking part in a public demonstration of any sort is met with brutality. These people knew what they were getting into and were prepared to pay the consequences. All the demonstrators I spoke to acknowledged the risk of arrest but didn’t care.
Unlike last week, when Belarusian authorities arrested 16 journalists (including an RFE/RL employee, who was beaten and whose equipment was destroyed), this time the police were less aggressive toward journalists. That didn’t mean they weren’t brutish toward us: A BBC cameraman was roughed up and a handful of journalists were detained.
At some point, the crowd had divided onto both sides of the street. If the goal of the police was to disperse the crowd quickly and without causing too much of a scene, they did an efficient job, forming a human chain on street corners while marchers were divided by traffic.
At 7:30 p.m., just a half hour after it had started, the demonstration came to an end. Most of the protestors had either been arrested or fled in other directions before reaching their destination, a shopping mall just a few blocks away. We journalists who had decided to linger on the corner of the park surrounding the Opera House were forced to scurry backward by a line of marching, angry meatheads.
This week marks the end of the university term in Belarus. As I walked away from the scene of the protest, I saw a group of laughing graduates, dressed to the nines, posing for a photo beside a fountain in front of the Opera House, utterly oblivious to what was happening around them.