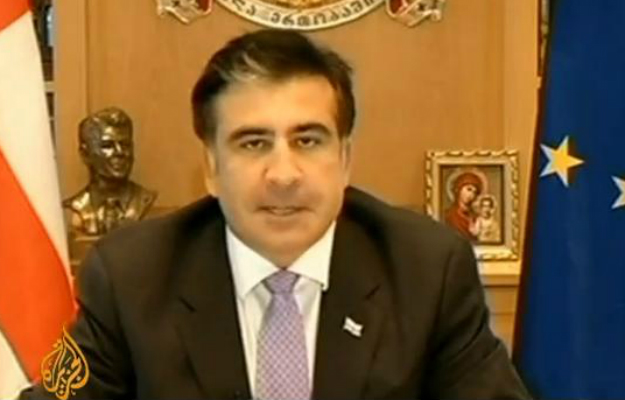 TBILISI, Georgia — The results are in. The party of Georgian President Mikheil Saakashvili has lost the parliamentary election. And, in what is perhaps the biggest surprise of all, Saakashvili has conceded without a fuss. His United National Movement lost parliamentary elections Monday to the opposition Georgian Dream coalition 55 percent to 40 percent, with 61 percent of voters turning out to vote.
“I am deeply confident that ultimately, regardless of what threats these achievements may face within the nearest months or years, their eradication is impossible,” Saakashvili said in a concession speech early Tuesday afternoon before the total vote count had even been completed. Saakashvili has said all along that he looks to the West as a model for Georgia, and that the ultimate goal of his rule was to establish Georgia as a democracy in a neighborhood sorely lacking one. By losing — and losing gracefully — Saakashvili effectively won in this broader mission. He is currently presiding over the first peaceful transition of power in the region, which is no small feat.
Judging by the rhetoric of the opposition, its supporters, and many Saakashvili critics in the West, however, this was not the way things were supposed to happen. Opposition supporters had been primed by their leader, billionaire Bidzina Ivanishvili, to believe that, were they to lose the election, it would be stolen; if they were to win, the government would refuse to recognize the result and use violence to put down protests.
Gathering last night in Freedom Square in the center of Tbilisi, opposition sympathizers sounded correspondingly primed for confrontation. “We will not give up!” Georgian Dream supporters chanted. “I know him from his childhood,” Tea Birtskhalavi, an economist, told me of Saakashvili. “He was always insane. He’s paranoid.” “I think the result for Georgian Dream is small. It should be higher,” Giga Svandidze, 28, said. “We want more,” Georg Mkhevidze, 56, interrupted.
But, as it turned out, Georgian Dream did not need more. Preliminary results showed that Ivanishvili’s coalition had won 77 out of the 150 seats in parliament, assuring it a majority. The hysteria underlying concerns that Saakashvili would steal the election and violently crack down on his supporters was belied almost immediately on Monday night by the scene in Freedom Square, where not a single police officer was present, a fulfillment of the government’s plan “to hide the police” regardless of Monday night’s outcome. The day after the election was like any other normal day in Georgia, aside from cars full of joyous Georgian Dream backers joyriding through the streets. There were no reports of clashes between supporters of the opposition and government.
That air of calm was briefly punctured on Tuesday afternoon, however, during a combative, 90-minute press conference that Ivanishvili gave at his Georgian Dream headquarters, a smart, modern building abutting the Mtkvari River. There, he launched what the Associated Press labeled “a vicious attack on President Saakashvili,” including a demand for him to resign and call an early presidential election, despite the fact that Sakashvili’s term does not expire until October of 2013. “This call is totally unacceptable and is a direct attack against democracy and the rule of law,” Wilfried Martens, the President of the European People’s Party, of which the UNM is an observer-member, said.
In contrast to Saakashvili’s gracious tone, the Georgian Dream leader was defiant. “Violence and torture and lies were successful in Georgia because they were the fruits and products of Saakashvili’s ideology,” Ivanishvili said, deploying the same sort of lurid rhetoric he has used throughout the campaign. “His people were brainwashed and working in an environment of lies.” Such talk is not conducive to cooperation in a parliament that is roughly divided in half, nor does it portend well for the post-election atmosphere of comity and brotherhood that both candidates say they wish to create. Rumors are already spreading in the capital that certain high-ranking members of the government may need to make plans to leave the country, in fear of retributive prosecution along the lines of what befell Ukraine’s former Prime Minister Yulia Tymoshenko.
In light of the government’s reaction to the election results, it’s worth looking back at the apocalyptic predictions the opposition and its supporters were making right up until the close of the polls last night. “I’m doing everything in my capacity not to allow Syria in Georgia,” Ivanishvili told Foreign Policy’s Josh Rogin. Lincoln Mitchell, a professor at Columbia University’s Harriman Institute and one of Ivanishvili’s most vocal supporters in the United States, wrote that the images of a prisoner being raped with a broom handle “demonstrate[ed] the nature of life in Georgia today.” He went onto claim that, “the Georgian government has, recklessly, made it clear that they will steal the election if necessary while daring anybody to stop them.” As late as April of this year, the American Conservative’s Daniel Larison alleged that Saakashvili had “created a one-party state.” Full-page ads purchased by Ivanishvili in the New York Times and Washington Post accused Sakashvili of perpetrating an “almost neo-Bolshevik style of governance.”
Bolsheviks, neo or otherwise, tend not to hold free and fair elections, never mind hand over power peacefully. And it’s a strange “one-party state” where a party loses an election to another. Ceding power to a man he clearly loathes, Saakashvili has unambiguously refuted the many who had alleged he would “pull a Putin” by attempting to stay in power via making himself Prime Minister. He has passed the “litmus test” that that this election posed to Georgia; the question is now whether his adversary is up to the same task.