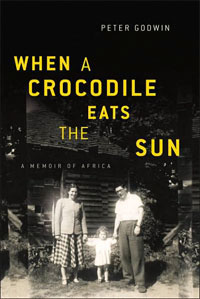 Hunting in Zimbabwe for Identity and Family

When a Crocodile Eats the Sun: A Memoir of Africa
By Peter Godwin; Little, Brown and Company; 352 pages; $24.99.
Last August, I visited an elderly Jewish couple at their spacious apartment in an affluent neighborhood in Johannesburg, South Africa. A distant family friend had referred to them as people who would welcome the opportunity to take me out for dinner during a long journalistic assignment in a country in which I had few acquaintances. Ronnie and Avner were not South African, however, but Zimbabwean, two of the very few Jews left in that troubled country. They lived in Bulawayo, Zimbabwe’s second largest city, where Avner owned a clothing factory, but they frequently traveled to South Africa to escape their country’s awful state of affairs. Avner had fought in the Israeli War of Independence; he and Ronnie visited Israel frequently. I was shocked that an elderly couple with the means to move would continue to live in a country that, since the seizure of white-owned commercial farmland ordered by President Robert Mugabe in 2000, has been steeped in lawlessness, violence and poverty.
A few months later, I heard that Avner had passed away. When I expressed my condolences to Ronnie, she told me that she had finally decided to make aliya. If there is ever a reason for the State of Israel, I thought, Jewish Zimbabweans are it.
In Peter Godwin’s mesmerizing memoir of contemporary Zimbabwe, “When a Crocodile Eats the Sun,” the matter of Israel never comes up. But it was one that nagged me from the minute I read Godwin’s account of the discovery at the heart of this book. When Godwin’s father suffered a heart attack in 1996, Godwin’s mother, Helen, a doctor, told her son to return home. There, hanging on the wall, he saw a photograph of his father’s family that he had never seen before, one that prompted a revelation from his mother: Godwin’s father, George, was not the “Anglo-African in a safari suit and desert boots, with his clipped British accent” that his son had always imagined him to be, but rather a Polish Jew, born Kazimierz Jerzy Goldfarb.
Thus begins Godwin’s process of self-discovery, through which he attempts to learn more about the fate of the European Jews in general and those of his family in particular. He visits museums and libraries, and contacts various European ministries, in an effort to determine what happened to his father’s mother and sister, from whom George was separated as a young man. Godwin learns that his father managed to escape Poland and joined the Free Poles in England, where he met Helen. After the war, the couple immigrated to Southern Rhodesia, a British colony rich with opportunity due to the postwar boom.
Why did George Godwin invent a new life for himself? For starters, “a white in Africa is like a Jew everywhere,” Godwin writes, referring to the loneliness and terror that haunt his parents in a country where going to the supermarket requires carrying stacks of currency — Zimbabwe has the world’s highest rate of inflation — and risking attack by armed thugs. At any moment, their home could be raided by government apparatchiks or by common criminals calling themselves veterans of their country’s war of independence against white rule. The septuagenarian George once got into fisticuffs with a burglar, forcing Helen to install a bolted “rape door” in the hallway as an extra precaution against home invasion.
There were cultural taboos to resist, as well — including characterization as soutpiels, an Afrikaans epithet meaning “salt penis,” used to describe Anglo-Africans who bestride the ocean with one foot in Africa and the other in Europe, allowing their “genitals to dangle in the ocean where they pickle in the brine of cultural confusion.” And if being European was difficult, life as a European Jew must have seemed unbearable. Once a proud community of several thousand, the Jewish population in Zimbabwe has by now diminished to a few hundred, most of them elderly. During one of Peter’s visits, the synagogue in Bulawayo burned down, likely the victim of Mugabe’s campaign of destruction.
But Godwin stumbled upon a more nuanced explanation at, of all places, his father’s funeral. Surveying the multiracial attendants, Godwin notes, “Mugabe had managed to achieve something hitherto so elusive, a common bond forged in the furnace of resistance to an oppressive rule.” Escaping European antisemitism some 60 years ago, George Godwin was simply not going to let hatred chase him and his wife halfway around the world again. Opting out — as so many white Zimbabweans, including the author, had done — was simply not something this hardy old couple could even contemplate. A new life in Africa was “clearly the antidote to Europe’s great burden of history,” and leaving it would be a betrayal of all the Zimbabweans that the Godwins had come to care for and love.
“Like my father before me, I am rejecting my own identity. I am committing cultural treason,” Godwin writes, referring to his decision to leave Zimbabwe and move to America. Yet this admission evinces not simply the guilt of a man who witnessed grave suffering in his country and feels impassive in its enormity, but also of a conflicted Jew who suddenly feels some ineffable — yet ultimately elusive — connection to a people.
Link