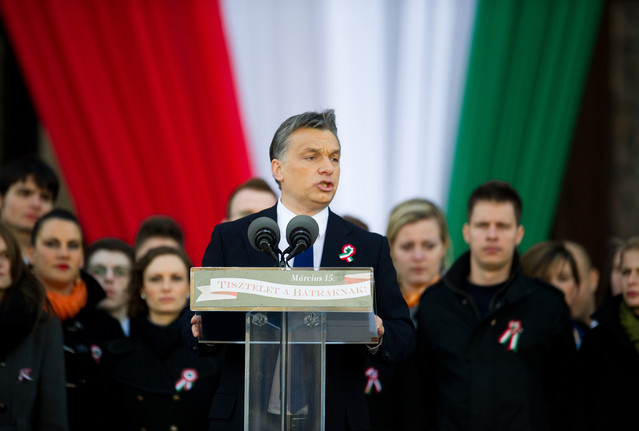 Hungary's Prime Minister Bites the Hand That Feeds Him

On March 15, Hungarian Prime Minister Viktor Orbán stood before nearly 100,000 of his fellow countrymen in Budapest and declared, “Hungarians will not live as foreigners dictate.” Drawing an explicit connection between the European Union, which Hungary enthusiastically joined in 2004, and the Soviet Union, which brutally crushed a Hungarian revolt in 1956, Orbán said, “We are more than familiar with the character of unsolicited comradely assistance, even if it comes wearing a finely tailored suit and not a uniform with shoulder patches.”
This style of demagoguery is nothing new for Orbán. Since his right-wing Fidesz Party swept to power in 2010 with an overwhelming parliamentary majority, he has repeatedly instigated conflict with international partners. But in choosing now to channel his ire directly at the European Union, he may be signaling that his political intentions are even more reactionary and revisionist than we had previously imagined.
The EU and Orbán have been at odds for some time: Many of the measures that Orbán passed after taking office—including laws threatening press freedom, judicial independence, and governmental checks and balances—have earned criticism from officials in Brussels (as well as from Secretary of State Hillary Clinton), who allege they have weakened the country’s democratic institutions. But no one of influence in Budapest had ever previously suggested that Hungary’s economic and political future wasn’t closely tied to the rest of Europe. Indeed, Hungary, which has suffered acutely from the financial crisis, has been seeking aid from both the EU and the International Monetary Fund since 2009. And Hungarian officials have had to accept that, in some ways, the balance of power in this relationship objectively tilts away from them. As a condition of its assenting to talks between the IMF and Hungary, for example, the EU has mandated that Fidesz amend some of its most controversial laws.
What made Orbán’s speech so remarkable was that, both in its rhetoric and the manner in which it was stage-managed, it suggested that his government would respond to further entreaties from Europe with unmitigated intransigence. The very date on which it was held has a resonance in Hungary that ought to be foreboding for its neighbors. March 15, 1848 is when Hungarians mark the start of their uprising against the Austrian Empire, part of the continent-wide revolutions that swept Europe that year. Orbán was clearly trying to liken his current battle with the EU to the country’s past struggles against outsiders, and to place himself within a long tradition of nationalist heroes. The audience certainly got the message. According to The Wall Street Journal, one member of the crowd held up a sign stating, “Colonization: 1956 Soviet Tanks, 2012 Western Banks.”
Rather than hint at any possible compromise with international partners, Orbán castigated them as liberal elites trying to impose their will on Europe’s silent majority. “We have with us the silently abiding Europe of many tens of millions, who still insist on national sovereignty and still believe in the Christian virtues of courage, honor, fidelity, and mercy, which one day made our continent great,” Orbán declared. “We will not be a colony.”
It is hardly unusual, of course, to hear this sort of aggressive, nationalist, and explicitly anti-EU rhetoric in Europe. One hears it, however, not from the premiers of EU member states, but from spokesmen for far-right political parties. And Hungary does have such a party, Jobbik, which won 17 percent of the vote in 2010. In addition to espousing anti-Semitic conspiracy theories and racist incitement against Roma, the party is fervently anti-EU; at a rally in January, Jobbik supporters even burned an EU flag.
Fidesz has often leveraged Jobbik’s unabashed xenophobia to present itself as the only bulwark between democracy and the abyss. Ever since his government has come under international scrutiny, Orbán’s supporters have argued that outside criticism will only help Jobbik by further radicalizing Hungarians. Such reasoning has always been patronizing to Hungarians, positing that they are incapable of responding to external criticism of their government without voting for a neo-fascist party in response. There is also an unsubtle air of diplomatic blackmail, a veiled threat that the United States and Europe criticize Fidesz at their peril.
For all his bluster in Budapest, however, Orbán strikes a far more conciliatory tone in his dealings with Brussels. In a letter last week to EU Commission President Jose Manuel Barroso, sent just two days before his fiery speech, Orbán politely explained how his government is attempting to change the controversial laws so that they will better conform with EU standards. “I also seek your cooperation to make the necessary arrangements to start talks to reach an agreement on a precautionary financing facility for Hungary so that any unnecessary delay can be avoided,” he concluded. Orbán knows full well the power of jingoistic rhetoric, particularly in Hungary, which is why he cynically deploys it at home and then, hat in hand, becomes a shrinking violet when dealing with Brussels.
Even if his speechifying is insincere, however, it’s scarcely acceptable that the leader of an EU member state is whipping up such crudely nationalist sentiments. Prime Minister Orbán, who was democratically elected, is permitted, of course, to say whatever he wishes about the EU; he can rouse nationalist passions all he likes; and he can draw absurd historical comparisons between the European and Soviet Unions. One wonders, however, why he expects to do so on the dime of “foreigners” he claims to despise.