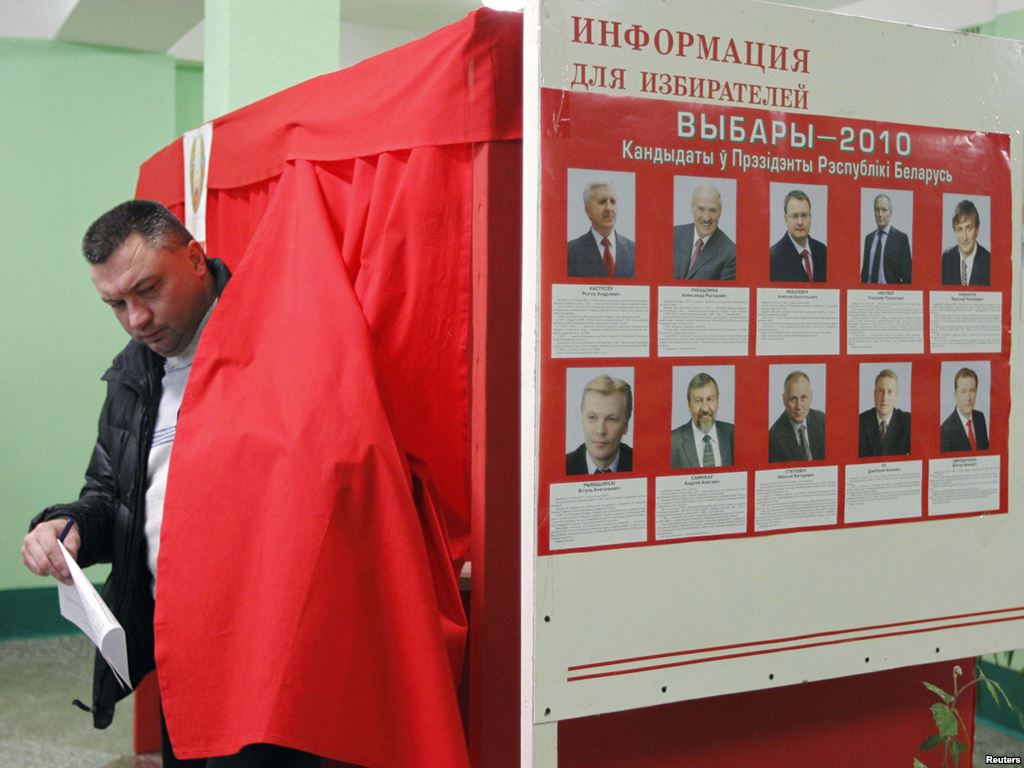 How to Rig an Election

For a moment during the recent presidential campaign in the former Soviet republic of Belarus, I felt like I was covering a school board election in small-town America. The scene was an auditorium at a Minsk ballet academy, where young boys in unitards lingered in the hallway. On stage stood Victor Tereshenko, one of nine men running to challenge the incumbent president, Alexander Lukashenko. About 20 people sat in the room, wearing expressions ranging from overly enthusiastic to moderate disinterest. There was no media to cover the event, just someone recording the talk with a digital camera.
Welcome to democracy in Belarus, which President Lukashenko has ruled since 1994. Over the weekend, he won a sham election that will grant him five more years in office, garnering 80% of the vote according to official figures. Opposition supporters who gathered in the city’s central square on Sunday evening to protest the fraudulent results were met with a vicious response from security forces. Yet while Lukashenko’s uncompromising brutality was apparent on Sunday, he had worked hard in the weeks prior to put on a show of electoral democracy for Western observers.
This year, there was a plethora of candidates (each of whom received free airtime on television and radio), a televised presidential debate (though Lukashenko declined to participate), and campaign events like the one I attended last Saturday. Even Lukashenko’s critics conceded that the campaign process was marginally more democratic than those of elections past. But far from representing real strides forward, the ostensibly liberalising moves Lukashenko made are characteristic of the “managed democracy” model of contemporary Russia.
There are three ways in which the Belarusian regime rigged the system. The first concerns media freedom. With the exception of two independent weekly newspapers (which have a combined readership of 30,000), the media lies in the hands of the state. The regime makes it practically impossible for opposition media to exist thanks to onerous registration laws, and routinely shuts down websites and newspapers. Television, where most people get their news, is state-controlled, and a recent reportfound that nearly 90% of political news was devoted to Lukashenko, nearly all of it either positive or neutral.
The second problem is balloting, which the regime insisted take place over the course of five days. Early ballots are not monitored overnight, leaving much room for tampering—which is why the regime went out of its way to encourage, and compel, early voting. I heard messages on the Minsk subway encouraging people to vote early. As most Belarusians work for state agencies and all of the country’s universities are public, it’s easy for the government to coerce citizens to vote early. Valiantsin Stefanovich of the human rights organization Viasna (“spring”), showed me a set of papers he had obtained that were given to the head of a furniture factory. They instructed the foreman how to ensure that all of his subordinates had voted early, providing him with a checklist. While it’s difficult to prove that individual ballots were tampered with, the regime’s insistence on getting out the early vote made election observers rightly suspicious. To be sure, those ballots are secret, and individuals can vote for whomever they want. But the lack of overnight monitoring leaves much room for mischief, as does the final concern: counting.
The problem with vote-counting begins with the ballots themselves. They have no safety measures—watermarks, serial numbers, etc—making it easy for the regime to stuff ballot boxes or switch individual ballots. The Central Election Commission has over 7,000 workers, of whom only 183 belong to democratic parties. But many Belarusians, conditioned by propaganda, seemed ambivalent about the potential for fraud. Outside a polling station (which, in true Soviet-style, featured a buffet with wine, vodka and local schnapps) on Sunday, I asked an elderly man if he was concerned about the validity of the election, particularly allegations that the government might manipulate the early ballots in the evening when observers are not on watch. “What happens at night?” he asked incredulously. “I sleep during that time.”
On Saturday, leading opposition candidates Andrei Sannikov and Vladimir Neklayev called upon their countrymen to join them the following evening in protest at October Square, the traditional location for opposition rallies. Both Sannikov and Neklayev were badly beaten the next evening.
Last month, when Neklayev visited Prague on a tour of European countries, I asked him if he was afraid for his personal safety given the history of opposition politicians in Belarus. He waived off the question, telling me that he was well aware of the risks. The latest reports indicate that he has been forcibly removed from the hospital to which he was rushed on Sunday night, and his whereabouts are unknown. His condition is a fitting metaphor for the state of Belarusian democracy.