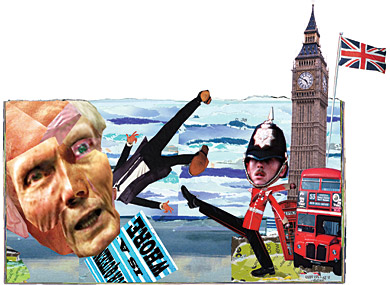 When U.K. officials barred the Reverend Fred Phelps from entering the country, they didn’t just give the infamous bigot undue attention, they violated one of the most important principles of freedom.

“God hates the queen Mary’s College, the fag-infested U.K., England, and all having to do with spreading sodomite lies via The Laramie Project , this tacky bit of cheap fag propaganda masquerading as legitimate theater.” Thus spake the Reverend Fred Phelps of Topeka, Kan., a man far more famous than he deserves to be. Founder of the Westboro Baptist Church, the bigot preacher’s condemnations of homosexuality are so outrageous — and have become the subject of such abundant coverage by the media — that the man has become a punch line.
At least once a day, transmissions from the Westboro Baptist Church pour forth from the fax machine near my desk at The New Republic — all of them declaring God’s hate for some municipality or institution due to its not taking the same zero-tolerance position on “faggotry” as the Reverend Fred. As I presume the case is elsewhere in Washington (Phelps claims to fax every U.S. congressman and senator, the White House, and many major media organizations on a daily basis), these missives are deposited directly into the trash or, as in my office, taped to a door for the general bemusement of one’s coworkers.
Marginal and mad as Phelps and his followers may be, however, many see the Westboro Baptist Church as a growing and actual threat to democratic society, rather than a bizarre coven of traveling performance artists. Those who have given Phelps such undue attention have tended to be either opportunistic journalists looking for a good story or gay groups trying to scare the bejesus out of donors; in other words, they’ve had understandable, if not exactly justifiable, reasons for obsessing over this silly man. But now an authority no less prestigious than the government of the United Kingdom joins those who are making a mountain out of a molehill.
Earlier this year Phelps, along with his shrew of a daughter Shirley, announced plans to protest a production of The Laramie Project at Queen Mary’s College in Basingstoke, a town about 50 miles outside of London. The play, which has become a required performance in the drama department of practically every right-thinking liberal high school and university in the United States, tells the story of Matthew Shepard from the perspective of dozens of people involved in his life and untimely death. Phelps, his daughter, and whatever followers they could muster were planning to stand outside the production space with their well-worn neon poster-board signs, which depict stick figures in all manner of compromising, sodomitic positions, while shouting “God hates fags!”
“Both these individuals have engaged in unacceptable behavior by inciting hatred against a number of communities,” an official with the U.K. Border Agency said in an attempt to justify the decision to bar the Phelpses from entering the country. “The government has made it clear it opposes extremism in all its forms.” Never mind the speciousness of this claim (the U.K. government has not been nearly as discriminating in its treatment of foreign radical Muslim preachers, many of whom have ties to terrorist organizations and have called on their British coreligionists to wage jihad against the British state). Are governments justified in banning or otherwise hindering the speech of individuals who “incite hatred” of minority groups, and if so, should gays be cheering this particular decision?

On its face, barring the likes of Fred Phelps and those who engage in such rhetorical brutality seems like a simple, catchall solution to an obnoxious problem. There’s no question that Phelps is a hatemonger whose most flamboyant words might be construed as a call to violence. And given Europe’s history with fascism and popular susceptibility to demagogues, one can understand how the British government would be particularly sensitive about a seeming crossbreed of Adolf Hitler and Elmer Gantry setting foot on English soil so as to shout bigoted insults about a once-oppressed minority group.
Ultimately, however, punishing Phelps for what he says is not just wrongheaded but self-defeating. One of the most fundamental aspects of a free society is freedom of speech. And that freedom extends to everyone, even the most pernicious. It means freedom for nasty, evil men like Phelps.
The decision to bar Phelps is counterproductive as it bestows far too much credit on the man’s persuasive capacities. In explaining the rule under which his entry was barred — a nebulous law that prohibits the incitement of religious and/or racial “hatred” — the British government stated, “The exclusions policy is targeted at all those who seek to stir up tension and provoke others to violence, regardless of their origins and beliefs.” Like most regulations aimed at suppressing hate speech, the British law is useless, and the Phelps imbroglio demonstrates its ultimate futility. It’s naive to think that everyday heterosexual British citizens with ambivalent views about homosexuality would, by dint of hearing the words of Fred Phelps, not only transform into raging homophobes but acquire a hatred of gays so intense that it would compel them to commit violence against the first homosexual to cross their paths. Moreover, treating Phelps as a genuine security threat along the lines of a terrorist gives him the attention he so desperately seeks. Perhaps if Phelps’s congregation were not made up largely of his immediate family, he would be worth worrying about. But Phelps makes a living by seeking publicity, and by turning him into a martyr for free speech, the British government has unwittingly connected him with a cause he only besmirches.
To be sure, Europeans take a more restrictive view of the notion of free speech than Americans. Most European nations cannot boast anything equivalent to the constitutional protections afforded by the First Amendment. In some European countries one can earn a prison sentence for denying the Holocaust. (An argument could be made that the U.K. authorities were justified in barring Phelps for stating, “Your queen is a whore,” given that defaming Her Royal Highness is against British law. But that’s neither here nor there.) But no matter how crude and offensive some talk show hosts and political figures in the United States may be, gays should not fall for the European temptation of seeking to prohibit or even limit “hate speech.”
Banning the speech of those with whom we disagree, even those who lie about us and condemn us to hell, betrays a fundamental principle of the gay rights movement: the notion that individuals should be free to live as they like provided their actions do not impinge on the freedom of others. Freedom is an expansive concept, including not just the right to love a consenting adult of the same gender but the right to speak and write what one believes. Phelps’s words may be hateful, and many gay people undoubtedly take offense at what he has to say, but in a free society, nobody has the right to not be offended.
Indeed, the gay rights movement would not be where it is today were it not for freedom of speech. It wasn’t so long ago that gay people could not meet at a bar without fear that the police would raid the premises, assault the patrons, and cart them off to jail in paddy wagons while carefully tipped-off news photographers documented the scene for the next day’s front page. Early gay publications were confiscated in the mail and their publishers were prosecuted for distributing “obscene material.” Gay rights pioneers cited the freedoms elucidated in America’s founding documents to defend their right to peacefully assemble, protest, and express their views, often facing fierce resistance from the government and society at large.
But ultimately, gay people prevailed. Allowed to speak freely and honestly, they have effectively made their case, and today the majority of Americans support some form of legal recognition for gay couples, the repeal of “don’t ask, don’t tell,” and the right of gays to adopt children. And while many Americans — perhaps most — still view homosexuality as immoral, they are increasingly repelled by the rhetoric of the Fred Phelpses of this world. The culture is now overwhelmingly supportive of gay equality, and it’s those who would hold us back who are on the rhetorical defensive. The case for gay rights has proven itself resilient over the past half century and has gained strength with time. It does not require the shuttering of opposing views — no matter how malicious, misleading, or unfair — to win the day, which it eventually will.
The Reverend Phelps may think we’re going to hell. Let him say it until he’s blue in the face.