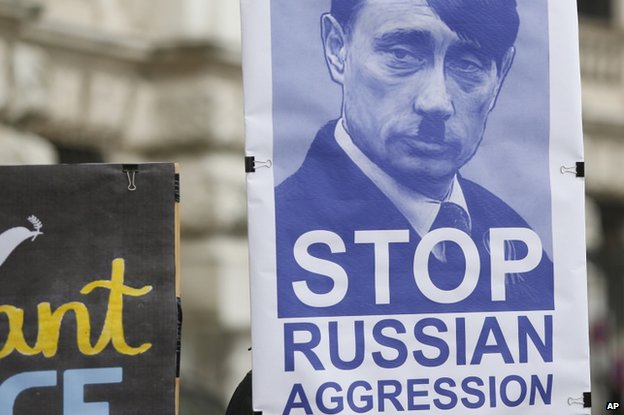 Germans Shun Comparisons Between Hitler and Putin. What Are They Avoiding?

When Germany’s Finance Minister Wolfgang Schäuble gave a talk to an audience of schoolchildren recently about Russia’s invasion and annexation of the Crimean peninsula, he reached for a historically fraught comparison. “We know this from history,” Schaüble, a veteran of the ruling Christian Democratic Union, said. “Hitler used such methods in Sudetenland—and a lot more.”

The outrage from Moscow was immediate, and predictable. “We consider this kind of pseudo-historical excursion from the German minister to be a provocation,” the Russian foreign ministry cried in a statement. The new German ambassador was summoned for a dressing down—his first official visit to the ministry. What was surprising was the fact that Berlin seemed to agree. Though Germany’s Chancellor Angela Merkel has talked tough about the behavior of Russian President Vladimir Putin, she nevertheless distanced herself from Schäuble’s remarks, describing Crimea as a “standalone case.”

Merkel had very real reasons for wanting to defuse the situation: Germany is dependent on Russian natural gas exports and has long tried to play a mediating role between Moscow and the West. But comparisons between Putin and Hitler seem to have touched a very specifically German nerve, with results that go beyond Realpolitik. “Is Germany a Country of Russia Apologists?” asked a recent edition of the newsweekly Der Spiegel. Indeed, misplaced historical sympathy for Russia has become so prevalent in German society that it even has its own word: Putin-versteher, quite literally “Putin understander.” (The phrase was coined by Joschka Fischer, a Green Party stalwart and former foreign minister who is decidedly against the trend.)

The question matters because, in the Ukraine crisis, Germany matters. It is Europe’s biggest economy and one of Russia’s largest trading partners. And because economic sanctions seem to be the only weapon that the West is willing to use to dissuade Russia from undertaking further aggression against Kiev, Germany will have to play a pivotal role in any resolution of the crisis. But rather than responding in a way befitting a world power confronted with the greatest threat to European peace and stability in decades, Germany appears to be descending into one of its perennial bouts of navel-gazing, substituting real discussion about how to contain Putin for meta-debate about the suitability of appropriating Hitler.

At an event in Washington earlier this month, Guido Westerwelle—another of Germany’s former foreign ministers and a former leader of the Free Democratic Party—remarked that “any comparison between Putin and Hitler is more than counterproductive.” Westerwelle, who served in the Cabinet alongside Schäuble before the FDP was voted out of government last year, spoke only of unnamed “German officials,” whose comments, he asserted, “damaged the dignity of Russia, not only the dignity of President Putin.”

After his speech, I approached Westerwelle and reminded him that former Secretary of State Hillary Clinton had drawn exactly the same conclusion about Putin. Indeed, she was the first figure of real international stature to liken the Russian president’s actions in Crimea with Hitler’s strategy in Austria and Czechoslovakia when, last month, she told a private audience of Democratic donors that, “Hitler kept saying they’re not being treated right. I must go and protect my people, and that’s what’s gotten everybody so nervous.” Westerwelle, visibly annoyed, reiterated to me that he was only addressing German officials; Americans, he seemed to imply, can make such comparisons if they wish, but Germans, of all people, ought to know better.

Germans are right to look askance at modern-day equivalencies with Nazi Germany. The conditions that led to the rise of the Third Reich were specific to time and place. In its sheer enormity, exterminationist ambition, and industrial scale, no event in history compares to the Holocaust of European Jewry. Whereas most nations boast of the things that make them proud and prefer to forget or outright ignore the dark spots in their history, Germans have collectively confronted their past like no other people and take an almost masochistic pleasure in letting the world know how awful they were. They are usually the first to condemn attempts by those who say that such-and-such a massacre or war or genocide was in any way comparable to what they, the Germans, perpetrated in the last century. This process of coming to terms with the past is so thorough and exceptional, forming such an integral part of the country’s contemporary identity, that there’s word in German for it: Vergangenheitsbewältigung.

Germany, along with the State of Israel, is a moral leader in protecting the memory of the Holocaust. Last month, when Chinese President Xi Jinping requested that a visit to Berlin’s Memorial to the Murdered Jews of Europe be included in the official itinerary of his state visit, Chancellor Merkel refused. The Chinese have long been frustrated over Japan’s hesitance to acknowledge its wartime crimes and hoped that a visit to the Holocaust Memorial would send Tokyo an unsubtle message about how a nation properly atones for its sins. Merkel, however, adamantly did not want her country’s history to be abused in a political tit-for-tat.

Yet while Germany’s solemn commitment to educating the world about its own experience of totalitarianism is a laudable one, sometimes Germans can take things too far when it comes to insisting on the historical uniqueness of its experience with fascism—and the backlash against Schäuble is just such an instance.

In his brief conversation with me, Westerwelle indicated that he has joined the ranks of the Putin understanders. “No other country had more victims in World War II than the Russians,” he said when I asked what made comparisons between Putin and Hitler verboten. This is an accurate historical point. But with Russia gobbling up an entire region of Ukraine and threatening to annex even more, how is reminding people of the Soviet Union’s 70-year-old victimhood at the hands of the Nazis—while completely ignoring its own, subsequent subjugation of Central and Eastern Europe, not to mention Stalin’s depredations against his own people—in any way relevant?

Decades after World War II, contemporary German political culture is marked by a rejection of everything that led to the rise of National Socialism. Today, Germans love consensus; from the shop floor to the Bundestag, Germany is marked by a cooperative disposition. The major political parties are committed to what’s popularly known as the “social market economy,” pledging to uphold the country’s regulated free-market system, with disagreement arising only over the tinkering around its edges. The relationship between management and labor is not nearly as adversarial as it is in the United States or in other European countries. This month’s strike by Lufthansa pilots was a rarity, particularly compared with the rest of the continent, where the “work stoppage” or “la grève” is a common occurrence. Germans appreciate political harmony as well. In the run-up to last September’s federal elections, most Germans said that they wanted the resumption of the “grand coalition” between Merkel’s Christian Democrats and her erstwhile opposition, the Social Democrats, and that’s exactly what they now have: a government composed of the country’s two major political parties, something unimaginable in Washington or London.

Likewise when it comes to political debate, Germans shun charismatic leaders—with some exceptions when it comes to foreign leaders; see Barack Obama’s 2008 visit to Berlin—and intemperate language, haunted as they are by the ghosts of the past. The jolly back and forth of Prime Minister’s Questions in Britain or the screaming matches on American talk radio would, if replicated in Teutonic form, give Germans the chills. Listening to and watching German politicians, one gets the sense that, in their collective subconscious, an image of theführer maniacally delivering a speech before tens of thousands of adoring listeners plays on loop.

But the German predilection for emphasizing the uniqueness of the Nazi era, combined with a culture of banal political comity, can leave them blind to today’s threats. If one of the chief purposes of learning history is to ensure that its tragedies are not repeated, then that requires gleaning lessons about how the past remains relevant. The situation in Crimea certainly merits such analysis.

On the discrete question of whether Putin’s behavior in Crimea warrants association with that of Adolf Hitler in the years leading up to World War II, Schäuble was entirely right. Hitler justified his Anschluss of Austria, as well as his annexation of the Sudetenland and later all of Czechoslovakia, on the pretext of “protecting” his ethnic brethren in another sovereign state. Putin, seven decades later, justified his annexation of Crimea on precisely such terms, alleging, without evidence, that ethnic Russians in Ukraine were under threat from a “fascist” government in Kiev. His now infamous speech on the subject, in March, established a heretofore-fundamental Russian right to intervene abroad wherever ethnic Russians require further “protection.”

Hitler’s actions led to the worst war the world has ever witnessed, and while no one is predicting—or even really claiming—that Putin has such a monstrous vision, has actions represent a grave threat to the state system and utterly destroyed the postwar assumption that European borders would never again be redrawn via force. For those who still think that this comparison is ludicrous or unfair, try seeing if you can tell the difference among these 16 quotes, compiled by the Washington Free Beacon, of Putin and Hitler justifying their annexations of Crimea and Austria/Czechoslovakia, respectively.

In their quickness to condemn Schäuble, Germans are mimicking Russia’s own crackdown on dissenters and allowing Putin to portray himself, absurdly, as victim. Last month, after the Russian history professor Andrei Zubov wrote a newspaper article headlined “It’s Happened Before” comparing the annexation of Crimea with the Anschluss, he was fired from his job at the Moscow State Institute of International Relations. Zubov, the Russian government claimed, was guilty of “harming the learning environment” merely for warning that Russia “must not behave the way Germans once behaved, based on the promises of Goebbels and Hitler.”

Germany’s low tolerance for Hitler comparisons comes from a good place: a desire to ensure that the Nazi era and all of its atrocities are never minimized or relativized. But denying the Hitler comparison with regard to Putin is also politically useful in that it lets Germany avoid the consequences that such a comparison entails. After all, if Putin is acting like Hitler, then surely Europe, led by Germany, would have to take stronger measures against him.

Most Germans, however, want nothing of the sort; only 38 percent support any sanctions on Russia. Another poll found that 49 percent of Germans want their country to take a “middle position” between Russia and the West, only 45 percent favor Berlin joining a united Western response. The country seems to sympathize with Social Democrat MP Ralf Stegner, who described Schäuble’s comments as “definitely not useful.” Indeed, if pacifism at all costs and appeasing tyranny are a country’s core foreign policy principles—as most Germans seem to want them to be—then speaking clearly about Russian aggression is certainly “not useful.” Denying the gravity of Putin’s behavior and chastising those who properly call him out as the expansionist brute that he is absolves Germany of taking the responsibility incumbent upon a country to which many are fruitlessly looking for leadership.