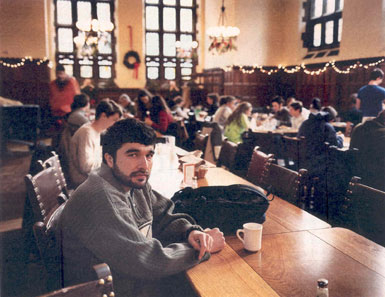 Ex-Taliban can learn from Yale experience

I was more than a little puzzled to see the self-satisfied mug of Rahmatullah Hashemi ’09 smiling at me from the front of the News on Monday. The last time I saw that Cheshire grin was in Michael Moore’s otherwise manipulative “Fahrenheit 9/11,” which, for all its demagoguery and factual errors, at least captured the Taliban’s odiousness. In a clip lasting 30 seconds, an indignant woman confronts Hashemi — who no less than five years ago was a chief spokesperson for the Islamist theocracy — at a public event.
“You have imprisoned the women — it’s a horror,” she shouts, tearing off a burka in protest.
“I’m really sorry to your husband,” Hashemi answered. “He might have a very difficult time with you.”
In the days of the Taliban, a woman who addressed a man in such fashion would have known what she had coming: acid on her face, perhaps; more likely, death.
In 2000, Hashemi, then 21, became a “roving ambassador” for the Taliban — Angelina Jolie for the Islamofascist set, if you will. He toured the U.S. defending the “achievements” of the Taliban, even visiting Yale. In the months leading up to Sept. 11, Hashemi had a falling out with the Taliban; he became disillusioned with their banning of neckties, chessboards and the Internet because he “wanted something good for Afghanistan.” Presumably, Taliban policy prior to its crackdowns in spring 2001, which included public torture and murder of homosexuals, veiling of women and destruction of ancient Buddhist statues, were all “good for Afghanistan.” Attempting to show intellectual growth, Hashemi told the News Monday he “really support[s]” free speech, adding, “I did and do believe in women’s rights. Yes, women should be able to vote.”
How progressive. There is little evidence to show Hashemi’s beliefs have changed much; indeed, available information indicates his views on world affairs hardly differ from ignorant conspiracy theories so common today in the Muslim world. In an article posted on the Web site of the organization sponsoring his stay in the U.S., he writes, “Seemingly, like the poor Taliban, common Americans are ignorant of the fact that their franchise state of Israel in the Middle East is serving as an American al-Qaida against the Arab world.”
There are certainly students whose beliefs outrage the majority of the student body; some of them even deign to print those beliefs in the campus press on a regular basis. But I have yet to come across a student who seriously supports the sort of abject horrors the Taliban inflicted on the Afghani people, never mind one who worked for a regime that committed such acts.
In a letter to the News, Eric Knibbs GRD ’10 wrote, “I was not aware that ideology could disqualify a Yale applicant” (“Students’ ideologies should not play role in admissions decisions,” 2/28). I believe it should not. But an applicant’s employment as an agent for a declared enemy of the United States that abetted a terrorist attack that took the lives of some 3,000 civilians is another matter.
The administration believes Yale is lucky to have Hashemi. According to the New York Times, Yale had “another foreigner of Rahmatullah’s caliber apply for special-student status.” Said former Dean of Admissions Richard Shaw, “We lost him to Harvard. I don’t want that to happen again.” Who was the applicant? A member of Saddam Hussein’s Ba’ath party? A protege of Robert Mugabe’s?
Don’t expect a word of protest from our feminist and gay groups, who now have in their midst a live remnant of one of the most misogynistic and homophobic regimes ever. They’re busy hunting bogeymen like frat parties and single-sex bathrooms. The answer Hashemi gave five years ago when asked about the lack of women’s rights in Afghanistan, “American women don’t have the right not to find images of themselves in swimsuits on the side of a bus,” is the sort of sophistry likely to curry favor among Yale’s feminist activists, who make every effort to paint American society as chauvinistic while refraining from criticizing non-Western cultures. To do so would be “cultural imperialism,” and we cannot have that at an enlightened place like Yale.
I personally want to know whether Hashemi supports the flattening of homosexuals via brick walls, which was one of the ways the Taliban dealt with gay men. Having written a newspaper column for nearly my entire time at Yale, I suspect some of my peers would like to see me flattened by a wall, but I doubt any of them served a regime that carried out such a practice as official policy.
Purportedly, Hashemi is here so we can learn from him. Shaw, who gushed that his interview with Hashemi “was one of the most interesting I’ve ever had,” told the Times, “this is a person to be reckoned with and who could educate us about the world.” We should welcome Hashemi, in hopes that American pluralism — eating in a kosher dining hall, taking classes alongside girls and gays — will help him liberalize his homeland. Rahmatullah Hashemi has much more to learn from Americans and Yale than we do from him.