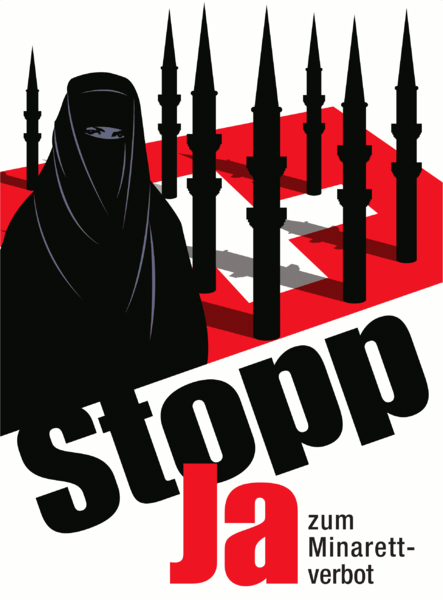 Prague
“The dark night of fascism is always descending in the United States and yet lands only in Europe.” So said Tom Wolfe in 1965, and so it is today.
Various commentators have argued recently that opposition by many Americans to a proposed Islamic center two blocks from the ruins of the World Trade Center represents deep-seated religious bigotry and paranoia. But if any place is plagued by increasing bigotry, it’s not America but Europe, the continent whose welfare states and pacifism are so admired by American liberals.
Last year, nearly 60% of Swiss voted to ban the construction of minarets—all minarets, everywhere, not just near the sites of world-historical terrorist attacks committed by Muslim radicals.
In Belgium, the lower house of parliament passed a burqa ban this year that now awaits Senate approval. In France such a ban became the law of the land last week, having been upheld by the country’s top court. Although there are legitimate reasons for such bans, some support for them certainly arises from anti-Muslim bigotry.
In recent years far-right, anti-immigrant parties have done alarmingly well across Europe. In Sweden, the nationalist Sweden Democrats entered parliament last month for the first time since the party’s founding in 1988. In the United Kingdom, the far-right British National Party won nearly three times as many votes (563,000) in this year’s parliamentary elections as in 2005; last year it won two seats in the European Parliament.
In Austria, the Freedom Party—formerly led by Joerg Haider, who had kind things to say of the Nazis—earned 17.5% of the vote in 2008. In France, the National Front party of Jean-Marie Le Pen, who questioned the existence of the Nazi gas chambers before conceding that they were a “detail” of World War II, came in second in the 2002 presidential election, earning a spot in a runoff with then-President Jacques Chirac.
And now the far right may be rising again in Germany, where stringent speech laws and parliamentary thresholds have long kept it out of the Bundestag. Recent polls cited by the German Press Agency estimate support for an anti-Muslim party at 20%, which would be enough to enter parliament.
“The fall of parliamentary seats into extremist hands represents the biggest shake-up in European politics since the disappearance of communism,” wrote Denis MacShane recently in Newsweek. Mr. MacShane is a Labour member of the British Parliament who previously served as minister of state for Europe.
Europeans are leery not just of Muslim immigrants but of Jews, nearly exterminated on the continent 60 years ago. A recent Pew Global Attitudes poll found that nearly 50% of Spaniards have either a “very” or “somewhat unfavorable” opinion of Jews. The figures are 25% for Germans, 20% for French and 10% for British. This anti- Semitism was underscored by the recent assertion of European Union Trade Commissioner Karel De Gucht that “it is not easy to have, even with moderate Jews, a rational discussion about what is actually happening in the Middle East.”
So when American liberals decry their conservative counterparts as bigots seeking to impose fascism on the U.S. (having failed to do so during two terms of the Bush administration), they ignore that part of the West where genuine nostalgia for fascism endures.
Anyone who has traveled throughout Europe knows that its image as an exemplar of progressivism, and ethnic and religious diversity, is a fabrication of the American liberal mind.
American liberals who ignore European bigotry while considering opposition to the Ground Zero mosque inexcusable bring to mind the mocking suggestion of German communist playwright Bertolt Brecht: “Would it not be easier in that case for the government to dissolve the people and elect another?”
Throughout the mosque debate, the vast majority of Americans showed themselves to be capable of respectful disagreement. It is Europeans, again, whose darker impulses we have to fear.