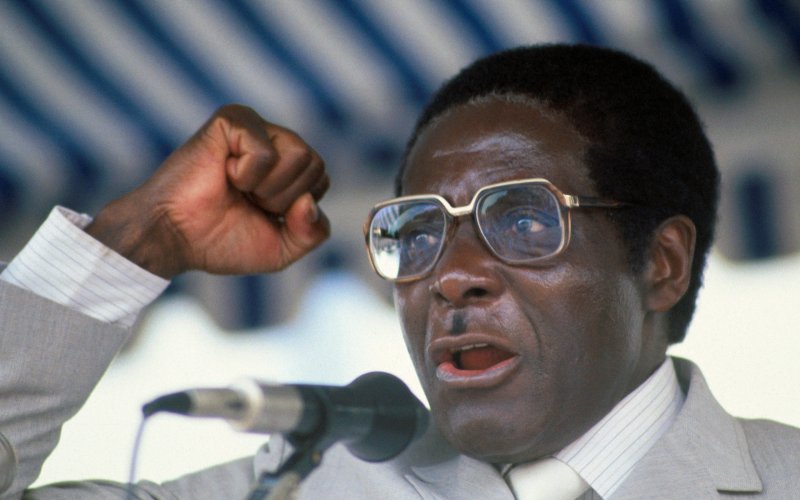 Does Mugabe Have a Conscience?

Most people would not suspect Robert Mugabe of harboring a guilty conscience. The 89-year-old President of Zimbabwe has ruled the southern African nation for 34 years, making him one of the world’s longest-serving leaders. The results of his misbegotten reign form a uniquely depressing catalog in the annals of post-colonial Africa: the erstwhile “jewel” and “breadbasket” of the continent, Zimbabwe has descended from a net exporter of food into a groveling recipient of humanitarian aid.
A land that once boasted the highest literacy rates in all of Africa is now bereft of its professional class, most of which has scattered to neighboring South Africa or Great Britain, its former colonial master. Mugabe, who came into office promising reconciliation after a long civil war, now rules by intimidation and violence. He regularly steals elections and imprisons those opponents he doesn’t kill.
Could any of these depravities be weighing on the old man? This is the conceit of “Breakfast with Mugabe,” a one-act production by British playwright Fraser Grace currently playing off-Broadway at the Lion Theatre in New York. Originally performed in 2005 by the Royal Shakespeare Company, “Breakfast with Mugabe” takes its inspiration from a newspaper item, perhaps apocryphal, that the Zimbabwean dictator had once consulted a white psychiatrist for depression. This is a provocative, if challenging, premise for a play, as it pairs a very public figure with a fictional character as dramatis personae. In an intense 100 minutes, we come face-to-face with the African leader who inspires, perhaps more than any other, equal parts hatred and loyalty.
Andrew Peric is a white doctor with a liberal conscience. He served as a medic—not a soldier—during the war of liberation against the white minority regime of pre-independence Rhodesia, is married to a black woman, and works with black patients in the country’s rural north.
One day, he is summoned to State House, the president’s palace in the capital Harare, by Mugabe’s much-younger wife, Grace, a notorious figure in her own right. Working as a secretary in Mugabe’s office, Grace won the president’s affections while his widely beloved wife Sally died of kidney failure. The Marie Antoinette of Zimbabwe, who rose from poverty to betrothed of the most powerful man in the country, she is known for lavish, international shopping sprees.
Grace tells Peric, “The President of Zimbabwe is afraid of his own shadow.” He is being haunted by an Ngozi, she claims, an evil spirit in the tradition of Mugabe’s majority Shona tribe. The man who appears resolute and forceful in public is, behind closed doors, cowering in fear. Rather than seek a traditional witch doctor, she has persuaded her reluctant husband, a man defined by the fight against colonialism, to seek the advice of a white doctor.

Peric is intrigued by the task, and not so implicit in his agreeing to work with the president is the promise that he may get something more in return than the mere professional satisfaction of healing a president-for-life. The play takes place in October 2001, not long after Mugabe succumbed to the demands of an amorphous group of thugs known as the “war veterans” to forcefully seize white-owned farms.
The war veterans, comprised both of former combatants in the war against white minority rule and hangers-on, began occupying the farms in 2000, carrying out violence not just against white landowners but also the many, many more black farm workers. Peric’s farm, we find out early in the play, has been targeted for such an occupation, and Mugabe hints that the situation will be resolved to Peric’s benefit should he cure him of his Ngozi.
Though the play’s setting is over a decade-old, the story seems painfully fresh. That’s largely because the political situation in Zimbabwe, though not as dire as it was in the immediate aftermath of the farm seizures, remains depressingly the same. Mugabe is still in firm control and still ruling with an iron-fist. The play’s enduring relevance is also attributable to the persistence of the suspicion and fraught power dynamics that exist between black and white.
For a period, Peric appears to be in control of the older, ruthless president, peppering him with questions and accusations more in the form of a prosecutor than a therapist (Grace obviously takes some liberties here in depicting the therapeutic process, which frankly doesn’t make for compelling drama). Though it is riveting to see a fictionalized Mugabe sweat profusely under Peric’s sharp questions, he eventually rises from his self-pity in an act of remarkable cruelty.
Mugabe, we discover, isn’t troubled by the many repressive aspects of his rule, but rather the ruthless ways he sidelined comrades in his struggle to become leader of the country’s black independence movement. The violent seizures of white-owned land, which gained significant attention in the Western press, are only briefly alluded to; Mugabe never evinces even a scintilla of doubt about what consequences might entail from removing experienced farmers and replacing them with political hacks. There is no mention of the wide scale crackdowns on the press and (mostly black) political opposition. Nor is there any reference to theGukurahundi, the massacre of some 25,000 members of the minority Ndebele tribe, which Mugabe perpetrated with North Korean-trained troops.
The Ngozi, rather, stems from an earlier set of betrayals, leaving us to believe that Mugabe is left utterly cold by the vast array of human rights abuses committed to stay in power. This seems to be an accurate reading of the man, who justifies everything he does, even against his fellow blacks, by conjuring the phantom menace of “colonialism.”
Michael Rogers is powerful and commanding as Mugabe (in a post-show talkback with the audience, Rogers revealed his distaste for media “propaganda” about Mugabe, a clue to the convincingness of his performance). Rosalyn Coleman plays Grace with appropriately regal demeanor, and the audience is left with the feeling that she is a woman more complex than the typical, cartoonish characterization of the dictator’s wife. Grace—once reported to have said, “I only wear Ferragamo”—is here rendered more compelling than other figures of the genre, like that other shoe-loving dictator’s wife, Imelda Marcos (herself the subject of a recent musical penned by David Byrne and Fatboy Slim). Ezra Barnes is magnificent as the earnest Dr. Peric, the only fault in his performance being the accent, which, with its broad, rather than clipped, vowels, sounds Australian rather than that of a third-generation white Rhodesian. This quibble aside, “Breakfast with Mugabe” offers food for thought.