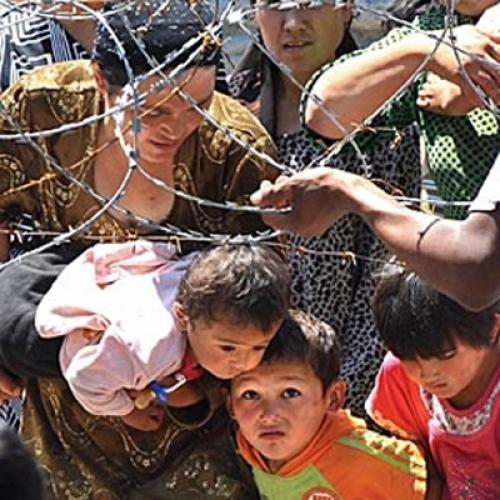 Dispatch from the Knife's Edge

The man tells me that the severed head is Kyrgyz. The video, relayed to me on the small screen of his mobile phone, is blurry and the sound quality is poor. But I can nonetheless decipher what is happening. A group of men are playing a macabre combination of soccer and field hockey with the detached cranium, shouting excitedly throughout as they kick and smack it with sticks. The clip lasts no more than 20 seconds.
We’re standing in an alleyway off a major thoroughfare in Osh, a 3,000-year-old city located in southern Kyrgyzstan, the hustle of a bazaar only steps away. By now a small crowd has gathered around us, eager to see the violence on digital display. My grimace does not satisfy the man, an ethnic Kyrgyz dressed in black slacks and a black t-shirt, who wants to show me more. With a few clicks on the keypad, he proceeds to another video, this time of a man lying crouched in a doorway. As the movie starts, it’s hard to tell if he is dead. But if he isn’t, he soon will be. The sound of machine-gun fire crackles and a horde of men shout and cheer as the body shudders with the smashing of bullets. The limp figure begins to ooze blood from his mouth and chest. The gunfire continues as dozens of bullets, if not a hundred, are fired into the body. A man screaming “Allahu Akbar” can be heard over the din—a sure sign, says my interlocutor, that the perpetrators are Uzbeks.
For more than four days in early June, the southern part of Kyrgyzstan—a poor, landlocked country of 5.4 million people located west of China’s Xinjiang Province—was wracked by ethnic riots. The violence pitted ethnic Kyrgyz, who make up a majority of the country’s population, against ethnic Uzbeks, a substantial minority. Crimes were committed by both sides. But it was the Kyrgyz who controlled the levers of power, and who, motivated by rumors of Uzbek atrocities and perhaps by videos like the ones I saw, were responsible for most of the violence.
I had visited Kyrgyzstan for the first time in April—a heady moment for the country, which, just two days before my arrival, had ejected a corrupt, autocratic leader from power and now seemed on the path to a more democratic future. It was easy to be swept along by the ebullience of Emil Umetaliev—then the owner of a popular travel agency, later the acting minister of economic development—who told me over tea at a trendy, Russian-owned café in the capital, Bishkek, that under the old regime his countrymen had been “like animals,” dependent on the government for subsistence and generally living in fear. But “after one night,” he said, his face lighting up, “they became like volcanoes,” brimming with ideas, energy, and a newfound independence.
Then the riots happened; and when I returned in July, it was no longer possible to feel anything but dread about Kyrgyzstan’s future. The stories I heard were unsettling, to say the least. Two weeping Uzbek women—standing in the burned-out hulk of a house that once belonged to family members—explained that their relatives, including an infant and a grandmother, were shot to death and left to smolder into ashes. Another Uzbek woman told of a seven-year-old disabled boy seized by a Kyrgyz mob, held down while gasoline was poured down his throat, and set alight. Two days before the riots started, one Kyrgyz-language newspaper had published an editorial thundering, “Without any doubt, under the current circumstances Uzbeks will become even more impudent if we don’t attack them seriously.”
By the time the rioting was done, about 2,000 houses had been destroyed, the vast majority belonging to Uzbeks; the official number of dead stood at just under 400, though the actual number is widely believed to be much higher; and some 400,000 people, mostly Uzbeks, had fled the region. About one-quarter of them, women and children only, had poured across the border into Uzbekistan, where the repressive regime of Islam Karimov, a man said to have boiled political opponents alive, set up temporary refugee camps at the urgent request of international aid groups and the United Nations. But, after just two weeks of displaying his benevolence to the foreign media, Karimov—perhaps worried that the refugees could destabilize his own regime—sent his ethnic brethren packing, back to Kyrgyzstan.
Now there is a sense of unease hovering over the country. No one knows whether upcoming elections will be a step toward democratization or a trigger for even more violence. Will the Kyrgyzstan that I saw in April or the one that I saw in July prevail? Many fear the worst. “Most of the Uzbeks we interviewed want to leave the country immediately, no matter where to,” a Human Rights Watch (HRW) researcher explained in August, following the publication of the organization’s report on the riots. As of July, those Uzbeks who could afford it were immigrating to Russia. Flights from Osh to Moscow and St. Petersburg were booked solid for the next few months. “I think Uzbeks cannot live here as they’ve lived before,” one Uzbek man, an English teacher at a local university whose home was destroyed during the riots, told me. “Genocide can happen.” That may be an overstatement, but it captured the sense of panic that many Uzbeks feel. It was easy to understand why they were afraid—easy, in other words, to see how uncertain Kyrgyzstan’s future is, and how ugly it could become.