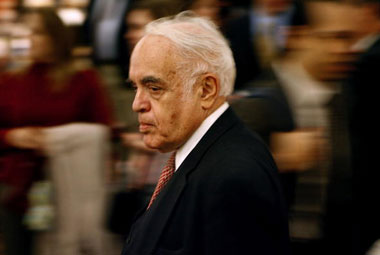 Alongside a zeal for supply-side economics, one of the defining passions of the political columnist Robert Novak, who died Tuesday at 78, was his unrelenting criticism of Israel. Some chalked it up to his disillusionment with the secular Judaism into which he was born. Others attribute it to his conversion to Catholicism—although that religious epiphany didn’t happen until quite late in his life, 1998, years after he had already established himself as one of Israel’s harshest critics in establishment Washington. Novak himself blamed his animus toward the Jewish state on nothing more profound than a military mishap that upset his writing partner, Rowland Evans, with whom he coauthored his much-read political column until 1993.
In 1985, John Barnes was finishing up his yearlong tenure as a legman for the Evans-Novak Political Report. Barnes was an Israel supporter, and he wondered why Evans and Novak heldsuch an antagonistic position toward the Jewish state. “I always thought it was an issue best not to bring up,” Barnes said in a recent interview. But his curiosity finally got the best of him. During their last dinner together in Washington, Barnes finally asked. Novak “put it on Evans,” as Barnes recalls. The pair had not written much about foreign policy after starting their column in 1963, but that changed when Evans traveled to the Middle East to cover the Six Day War in 1967. Two days after a ceasefire took effect, Evans found himself on the Jordanian side of the Jordan River with an Arab army regiment, when an Israeli fighter jet “appeared out of nowhere and strafed them.” According to Barnes, Novak said that the “relationship between Rowley and Israel was downhill ever since.”
Evans had always been a moderate establishment Republican. But the post-ceasefire strafing incident, Barnes said, changed his view. When Barnes later asked Evans about the Middle East, “he basically made the point that he thought that the Islamic world was enormous and big and important,” and that America’s close relationship with Israel put the United States at risk of enraging Muslims. That stance, Barnes added, rubbed off on Novak. “I think they had a bit of a deal to some extent, that they would indulge each others’ hobby horses,” Barnes said. “Evans with Novak’s supply-side economics; Novak with Evans’s views on the Middle East.”
“We ran hundreds of columns critical of Israel,” Novak said in a 2007 interview with Charlie Rose, “all of them written by Rowley Evans,” who was “very committed on the issue.” This explanation was confirmed by Evans’s widow. “Rowley brought Bob around to his point of view on the Middle East,” she said in a 2003 profile of Novak for Washingtonian magazine. “It cost them a lot. They lost some papers because of pressure from the Israeli government and certain Jewish organizations. But Bob never complained.”
Still, while an unfortunate brush with the Israeli military might have provided Evans with a reason for viewing Israel with a skeptical eye—and his partner with an amusing anecdote—it doesn’t sufficiently explain how a man like Novak, someone with strong opinions about everything, came to see the Middle East in the way that he did. Indeed, heard today after his death, it sounds like just what it was meant to be at the time: an excuse. After all, Evans retired from the column in 1993 and passed away in 2001. And it was over the past 15 years that Novak’s writing on American Jewry and Israel—unaffected by Evans’s presence—took on its most controversial form.
In 1997, Novak wrote a series of columns attempting to resuscitate the reputation of Louis Farrakhan, encouraging Republicans to give a hearing to the anti-Semitic Nation of Islam Leader, who, he wrote, was “knocking on the GOP’s door.” The brainchild of this effort was Novak’s friend Jude Wanniski, the Reaganite supply-side guru who later became a crank, penning screeds denying Saddam’s gassing of the Kurds and promoting political cultist Lyndon Larouche. Novak believed that a Republican alliance with Farrakhan could have “vast future implications,” fruitful ones. For a man now lauded as one of the most perspicacious political commentators of his era, this was a curious, if not dangerous, assessment.
But Novak’s real provocation of American Jewry waited until after the September 11 attacks, which he blamed on America’s support for Israel. Two days after the attacks, he wrote that “the hatred toward the United States today by the terrorists is an extension of [their] hatred of Israel” and that “the United States and Israel are brought ever closer in a way that cannot improve long-term U.S. policy objectives.” Was this neo-isolationism, befitting of the paleoconservative right to which Novak had a close ideological kinship?  If so, he took it a step further when, the following month, he referred to senior Hamas terrorist Mahmoud Abu Hanoud as a “freedom fighter” on CNN.
Novak was also a major voice in propagating the notion that the Iraq War was ultimately a war fought for Israel. In December 2002, in a column titled “Sharon’s War?” he wrote that then-Israeli Prime Minister Ariel Sharon “leaves no doubt that the greatest U.S. assistance to Israel would be to overthrow Saddam Hussein’s Iraqi regime. That view is widely shared inside the Bush administration, and is a major reason U.S. forces today are assembling for war.” One of the officials Novak later implicated in this plot was David Frum, who worked in the Bush administration as a speechwriter in 2001 and 2002. In a review of Frum’s White House memoir, The Right Man, Novak wrote in The American Conservative:

While Frum calls himself “a not especially observant Jew,” he repeatedly refers to his Jewishness. It is hard to recall any previous presidential aide so engrossed with his own ethnic roots. Frum is more uncompromising in support of Israel than any other issue, raising the inescapable question of whether this was the real reason he entered the White House.

When not accusing others of being fifth columnists for Israel, Novak was making contentious historical analogies. In a 2007 column datelined Bethlehem, “Worse than Apartheid,” Novak asserted that “the separation barrier in most places is a big, ugly and intimidating wall, not merely a fence,” and that Palestinians in the West Bank were in a sorrier state than black South Africans under white rule. That same year, Novak endorsed Ron Paul for president, a candidate who has flirted with anti-Semitism and questioned America’s relationship with Israel.
In light of this fraught relationship with American Jewry and Zionism, it’s difficult to believe that an incident on the Israeli-Jordanian border really accounted for Novak’s worldview. It’s fair, then, to consider what role his own alienation from Judaism and late-in-life adoption of Roman Catholicism might have played.
Novak was born into what he described as a “not very observant” Jewish family in Joliet, Illinois, in 1931. While his father was not bar mitzvahed and his grandfather was “not a very good Jew,” Novak was bar mitzvahed and joined a Jewish fraternity at the University of Illinois. Aside from these affiliations, he remained non-observant, and detached from Judaism, for the rest of his life.
It was not just Judaism, however, that turned off Novak, but religion in general. His first marriage in 1957 was rough from the start after he refused a demand by his father-in-law that a Presbyterian pastor deliver a blessing at the ceremony. For Novak, getting married at a Unitarian church was compromise enough. The marriage lasted a year, and when Novak married for the second—and final—time in 1962, the ceremony was held at an Episcopal church on Capitol Hill. In his memoir, The Prince of Darkness: 50 Years Reporting in Washington, Novak writes that he attended infrequently and stopped altogether as he was “repelled by the pastor’s political (liberal) sermons.” Yet it wasn’t just the lefty preaching of the clergyman that annoyed him. “In retrospect I believe I really was uncomfortable with the Christian liturgy,” he wrote.
Both he and his wife, Geraldine, had long harbored a “spiritual hunger,” and that seeking was encouraged by a small circle of devout Catholic friends, most prominently Jeffrey Bell, a former Reagan aide and himself a convert to Catholicism, who provided his friend with some Catholic literature after Novak fell ill with spinal meningitis in 1982. “I thought Bell was wasting his time if he expected me to become a Catholic,” Novak wrote. A decade later, Bell introduced Novak to Father C. John McCloskey, who could boast of a series of high-profile conversions, ranging from the abortion doctor-turned-anti-abortion activist Bernard Nathanson to television personality Lawrence Kudlow (two men who were also born Jewish). Though Novak credits Bell and McCloskey, as well as his wife’s search for a church where she could feel at home, with bringing him into Catholicism, the event that ultimately convinced him to make the leap of faith occurred at Syracuse University in 1996. Novak was preparing to deliver a speech to a group of college Republicans when a female student wearing a cross around her neck turned to him and said, “Mr. Novak, life is short, but eternity is forever.” Novak returned to Washington and began attending mass more frequently. He was baptized on May 22, 1998. After he converted, Novak wrote that he “heard nothing from my many Jewish relatives.”
Meanwhile, much of the Jewish pundit class has treated news of Novak’s passing delicately. While noting that Novak had Jewish “issues,” Commentary editor John Podhoretz eulogized him as “a difficult man in many ways, but I always found him interesting, lively, and friendly.” My colleague John Judis at The New Republic was even more nostalgic: “I miss Novak as a columnist, and miss the kind of columnist he was, who wasn’t content to air his hallowed opinion of facts that were already drearily familiar to readers.” According to Barnes, Novak’s polemical and charged attitude toward Israel and his embrace of less-than-philo-Semitic figures at home wasn’t enough to alienate him from all of American Jewry. While working at The Boston Herald in the late 1980s, Barnes befriended some conservative students at Brandeis University. “They asked me if Novak would come speak at Brandeis, of all places,” Barnes said. “And he did! I thought it was pretty gutsy. Most of the students there were Jewish and though I didn’t take notes of what he said that night, I remember him talking about the Middle East. By and large, he was civilly received. There was no guerrilla theater. Imagine that.”