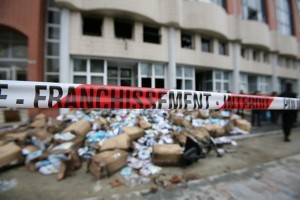 The smoke had barely cleared from the firebombed office of Charlie Hebdo magazine—attacked for publishing cartoons of Mohammed—when TIME magazine’s Bruce Crumley chose to criticise the satirists before the terrorist.

There exists an unspoken rule in the Republic of Letters — that land where novelists, poets, mere ink-stained wretches like myself, think tank scholars who churn out dry policy reports…really anyone who writes for a living, reside: No one should be physically harmed, let alone threatened, for something that they publish. Don’t get me wrong. I love literary feuds, even the bristling, (if well placed and rare), ad hominem attack. But the minute someone raises a fist, he’s lost the argument. Indeed, it’s a sign of a shallow mind and an insecure personality (see Norman Mailer) when a writer, flummoxed by the prowess of his intellectual adversary, resorts to throwing a scotch glass across the room. I hope that if my worst enemy, someone who wrote things that I absolutely despise, were ever confronted with violence by a fanatic of any sort, (even someone ostensibly “on my side”), I would defend him to the hilt.
Writers in the West rarely have to confront violence, certainly not from the state. Writers with a social conscience understand that they have something important in common with writers, whom they may never know, in far away lands. We are united in a fundamental belief: that freedom of expression is irrevocable and fundamental to a free society. We see this grand tradition of literary solidarity in organizations like PEN International, advocates for writers in authoritarian regimes whose lives and livelihoods are threatened by the mere exercise of activities which we in the West take for granted. And you see it in this fine publication, Index on Censorship, which for four decades has been exhaustively documenting challenges to free expression around the world.
That’s why the fatwa against Salman Rushdie was such a clarifying moment; here was a man who had published a book in the birthplace of free speech — the United Kingdom — whose murder had been suborned by a fanatical cleric halfway around the world. As Christopher Hitchens wrote about the death warrant put out for his friend, “I thought then, and I think now, that this was not just a warning of what was to come. It was the warning. The civil war in the Muslim world, between those who believed in jihad and Shari’a and those who did not, was coming to our streets and cities.”
Over the past decade, that civil war has intensified on the streets of Western cities; Amsterdam, (where the artist Theo van Gogh was murdered in broad daylight for a film which criticized misogynistic Koran verses), Nyhamnsläge, (the Swedish village where the home of cartoonist Lars Vilks, who drew images of Mohammed, has been repeatedly attacked), Aarhus (the Danish town where fellow prophet-image-maker Kurt Westergaard had to hide in a “panic room” after an axe-wielding Muslim broke into his home). It has thus been heartening to see this fundamental understanding among writers — that, no matter our political disagreements, we are all colleagues in a vitally important element of the free society — flower in response to a truly vile little excrescence by Bruce Crumley, the Paris correspondent for TIME magazine.
On Tuesday morning, the offices of the French satirical newspaper Charlie Hebdo were firebombed after it named the Prophet Muhammed its “editor-in-chief” for an upcoming issue. In an article entitled, “Firebombed French Paper Is No Free Speech Martyr,” Crumley taunted the paper’s editors. “Do you still think the price you paid for printing an offensive, shameful, and singularly humor-deficient parody on the logic of ‘because we can’ was so worthwhile?” he asked. Crumley, who would make an excellent propaganda commissar in Uzbekistan or Iran, chided French politicians for “denouncing the arson as an attack on freedom of speech, liberty of expression, and other rights central to French and other Western societies,” which is exactly what it was.
The original title of Crumley’s piece, still viewable in the website URL, was “Firebombed French Paper: A Victim of Islam, Or Its Own Obnoxious Islamaphobia?” If a reader, so offended by Crumley’s excuse-making for theocratic nutcases, bombs TIME’s Paris Bureau, would that make Crumley a “victim” of his own obnoxious cowardice? If there was ever cause to deport someone from the Republic of Letters it would be Crumley’s article, for in it he committed treason against his trade by showing himself to be a man eager to rat out his fellow writers and sell them down the river in a heartbeat.
Though he fashions himself a bold truth-teller, Crumley’s justification of violent extremism isn’t new. It’s just the latest iteration of a tired excuse for terrorism, expressed by everyone from Noam Chomsky to Ron Paul, which is that the victims of terrorism have it coming. What made Crumley’s entry into the genre singularly poisonous, and what I believe elicited the widespread disgust from journalists of all political stripes, is that it was written by a working journalist, not an academic, politician, or anti-“Islamophobia” activist.
To take just two examples of people on polar opposite sides of the political spectrum: Michael Brendan Dougherty, a paleoconservative with whom I’ve sparred on more than one occasion, termed the piece “The Most offensive Thing You’ll Read Today” (my one quibble with his judgment is that this is the most offensive thing you will read all week, if not all month). Meanwhile, Spencer Ackerman, a man of the left, tweeted, “No one has the right not to be offended. No one has the right to firebomb a newspaper that offends them.”
It’s amazing, given all the struggles and sacrifices that have been made for freedom of speech over many years, that statements so simple bear repeating. But as long as we have moral cowards like Bruce Crumley around, repeat them we must.