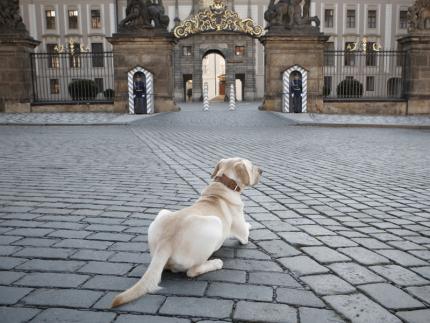 A Superhero Manqué and His Battle Against Czech Indifference

For most foreigners who visit the capital of the Czech Republic, the most memorable experience tends to be a stop at Prague Castle, a walk along the Charles Bridge at night, or perhaps a dinner cruise on the scenic Vltava River.
For me, it’s stepping in dog shit.
I have never visited a city with more dog shit on the streets. Czechs love dogs; almost everyone seems to own one, and they take them everywhere, including restaurants and the subway. But they have absolutely no compunction about not cleaning up after them. Leaving my apartment just the other day, I walked past an elderly woman standing idly by as her dachshund defecated outside a store window. As he finished, I slowed down to see if his owner would do the right and proper thing. Predictably, she left the steaming pile of crap on the street, tugged on her canine companion’s leash, and walked off. There was not a trace of shame or embarrassment in her face.
Having lived in the Golden City for about a year and a half, I’ve stepped in dog feces more times than I can remember; the same goes for all of my friends here. Dog crap on the streets is simply a fact of life for anyone who lives in Prague, as ubiquitous as goulash and pilsner. Leaving a pet’s feces on a public street is part of a broader Czech disrespect for the surrounding environment, as witnessed in the unsightly graffiti that covers countless walls in a city widely considered to be the most beautiful in Europe.
Adding to the outrage is the presence of street corner boxes dispensing free brown paper bags, a service that I have yet to see in any other city. Prague, like most municipalities, has a “pooper scooper” law, and dog owners can be fined if they are caught not cleaning up after their pets. But such fines, like everything in this country, can be avoided by bribing a police officer.
I regale you with these fecal musings to put into context the feeling of immense hopefulness that arose in me upon hearing of SuperVáclav—a caped Czech crusader fighting rude and inappropriate public conduct, particularly the failure to clean up after pets. Several weeks ago, a YouTube video emerged depicting the escapades of a man dressed like a low-rent Mighty Morphin Power Ranger with a giant “V” emblazoned across his chest traversing the streets of Prague. In one scene, reminiscent of my own recent experience, he comes across a man who begins to walk away after his dog finishes his business in a public park. SuperVáclav, a camera strapped to the side of his helmet, runs across the park, picks up the crap, and smears it on the evildoer’s back. In another video, SuperVáclav dumps buckets of water on people smoking at bus terminals, another activity prohibited by law but widely ignored. In a matter of weeks, these videos earned tens of thousands of hits from viewers around the world.
“I am SuperVáclav, and I have decided to take action against the indifference and hypocrisy in society,” he says on his website. “I’m tired of just sitting back and watching [the injustice] around us.” In a manifesto posted on his blog, SuperVáclav lists a variety of obnoxious behaviors, from “Boozers at children’s playgrounds and in parks” to “Unfriendly clerks at the Post Office and in government offices—they are paid to be nasty to us.”
While such displays of righteous civic-mindedness might be welcome in any society, they have a particular resonance in the Czech Republic. To put it bluntly, Czechs aren’t exactly known for their friendliness or hospitality, especially to foreigners. The disrespect for public space (and their neighbors) is only the most obvious manifestation of a general Czech passivity and indifference. There’s the widespread cynicism about politicians, unsurprising given the extent of corruption here. Vaclav Klaus, the buffoonish, pro-Russian president most famous for denying global warming and stealing pens at state ceremonies, is the country’s most popular politician; not surprising considering that he embodies the id of Czech parochialism. There’s the utter disregard for the plight of the country’s Roma (Gypsy) citizens, who today are barely more integrated in society then they were after the fall of the Soviet Union. Czech gays, despite not having the right to marry or adopt children, held their first pride parade last summer (over the vocal objections of Klaus and other Czech chauvinists), making Prague the last capital of a European country to do so.
It’s hard to pinpoint what exactly causes Czech coldness and insularity, but one can’t underestimate the legacy of communism. For 40 years, Czechs lived under a totalitarian regime that naturally bred disrespect for authority, and where cheating and lying were the means of social advancement. In his famous 1978 essay “The Power of the Powerless,” Vaclav Havel wrote that, “Life in the system is so thoroughly permeated with hypocrisy and lies.” But whereas most Czechs like to blame some nebulous “system” for their historic tragedies, Havel pointed the finger at his fellow citizens. “Individuals confirm the system, fulfill the system, make the system, are the system,” he wrote.
So when I first watched SuperVáclav take to the streets, I saw him as more than just a pedantic vigilante. Here’s a Czech who has finally had enough of his country’s collective indifference, who was taking a stand, however small, against the petty injustices that Czechs perpetrate and endure. “I would like everyone to take it to heart and change their behavior,” he said.
But then news emerged that, far from being a fed-up regular citizen who had decided to take the law into his own hands, SuperVáclav was part of a stealth marketing campaign for camcorders. I will have to wait for a genuine hero to wake his fellow Czechs from their apathetic slumber. And continue to make my way through piles of dog shit.