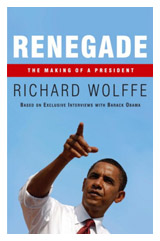 A Lapdog in Wolffe's Clothing

Renegade: The Making of a President
By Richard Wolffe; Crown; 368 pages; $26.00
Last month, Politico’s Ben Smith served up a juicy story about the controversy surrounding Renegade, former Newsweek correspondent Richard Wolffe’s book about the Obama campaign. There seemed to be no shortage of staffers at the magazine willing to speak ill of their former colleague, whom they accused (without attribution, of course) of whisking around the country on Newsweek’s dime while saving his best material for his recently released (and bestselling) tome. But the most telling part of Smith’s story was the way he described how the book came to fruition. For reasons that will soon be made obvious, Obama decided that among the many reporters assigned to cover him, Wolffe would be the one to whom he would grant exclusive access for the purposes of what would effectively be an authorized campaign book. Obama, Smith writes, “essentially assigned the book” to Wolffe. Teacher has reason to be pleased.

The allegation by Wolffe’s ex-colleagues that he hoarded all the best material for his book should be the least of their concerns. (How he affected the magazine’s reputation with his breathless coverage of Obama—which resulted in no less than six cover stories—is a different matter.) That’s because Renegade suffers from the fate of most hastily constructed campaign books in the digital age: it is simply a rehash of events that were obsessively covered when they first transpired. There really is no room today for Theodore White’s Making of the Presidentseries. When those books were written, we didn’t have twenty-four-hour cable news, blogs, and talk radio. There was just a handful of journalists covering the intricacies of national presidential campaigns, which allowed for their later recounting in novelistic—and revelatory—detail.

The most irritating aspect of this book is Wolffe’s attempt to fix everything that occurred during the presidential race into his overarching narrative of Obama as the “renegade” candidate who changed American politics forever with his inspirational rhetoric and grassroots organization. For instance, he writes that in the aftermath of the Jeremiah Wright fiasco, “a more conventional candidate might have cried racism and rallied his black base.” That Obama did not do this is apparently a testament to his “renegade” qualities.

Now, I know Richard Wolffe was not born in this country, but he has lived here for quite a few years and covered Washington extensively for the Financial Times. This means that he should have an elementary grasp of American politics and race relations. What serious black presidential candidate, in reaction to endless video clips of his pastor delivering sermons that make Jerry Falwell’s worst fire-and-brimstone homilies look like pallid New England ecumenicism , would have “cried racism and rallied his black base”? To do so would have been political suicide. And it does not take an uncommonly perceptive politician—or seasoned political journalist—to realize this.

In the same vein, Wolffe defends the wisdom of Obama’s off-the-cuff remark at a debate that he would be willing to meet unconditionally with anti-American dictators—a promise that Hillary Clinton used to her advantage throughout the rest of the campaign. Wolffe celebrates this as yet another example of the candidate’s “renegade” persona, quoting a campaign staffer to the effect that “it was the first time we saw Obama relish the fight.” Seven months into his presidency, Obama has had plenty of time to meet with a variety of hostile leaders, many of whom have said some pretty nasty things about him and his country. He hasn’t.

There are so many times in this book when you stop and wonder if Wolffe even understands that he is getting played like a fiddle. Asking Obama how he and his family have adjusted to their new lives under Secret Service protection, he elicits an anecdote about how the candidate invited his bodyguards to Thanksgiving dinner. “[N]obody had ever told them to come in and eat,” Obama tells the author. “Nobody treats them with respect.” Really? No politician, before the era of Barack Obama, had ever invited his Secret Service detail to a meal? “Nobody,” save the Renegade, “treats them with respect?” What sort of journalist passes along such a self-serving anecdote without skeptical comment, never mind corroboration?

After Obama fails to clinch the nomination on Super Tuesday, Wolffe asks him if he would leave politics to teach constitutional law if he lost the presidential race. The response is a model of disingenuousness:

“Yeah. I don’t have to do this,” he said as if running for president were just a seasonal job. “Of course, I really want to beat them now. They’ve annoyed me. But I could do something else. I’m not sure [Hillary Clinton] could.”

Having assessed these remarks—so typical of Obama’s contrived manifestation of effortlessness in all that he does—Wolffe writes of the candidate’s “obvious ambivalence” about losing to Clinton, describing him as “nonchalant about defeat.” Of course. A politician who rose from state senator to President of the United States in just four years is “ambivalent” and “nonchalant” about his career.

Defending himself, Wolffe told Politico that “there’s a whole chapter of the book called ‘Failure.’ This isn’t an authorized book [where] they controlled what I wrote or sought to control it.” But the chapter to which Wolffe refers is a reportorial account of how Obama lost the New Hampshire primary—a pivotal moment, which anyone writing a 334-page book about the campaign could hardly avoid describing. And if all this access came with no strings attached—and there’s no reason to doubt that—then Wolffe’s fawning is all the more pathetic. On page nine he has this to say about the atmosphere on Obama’s campaign plane: “There is an unbearable lightness of being.” Yes, he actually wrote that. No, it has nothing to do with aeronautics.

To be sure, Wolffe did get a few good tidbits. For instance, he breaks the news that Obama held a secret meeting during the campaign with the Rev. Jeremiah Wright in Chicago (though he offers precious few details on what transpired). In a later chapter on the transition, he reports that Rahm Emanuel was “unsettled by [Valerie Jarrett’s] personal relationship with the Obamas and wanted her outside the White House” (again, an intriguing factoid that calls out for deeper reporting). And, no doubt unintentionally, he occasionally captures Obama’s enormous self-regard in a way that only an oblivious fan could possibly manage.

As for Obama’s negative attributes—well, Wolffe doesn’t have much time for those. Discussing the candidate’s cynical decision to opt out of the public financing system, the most he can muster is that Obama’s “argument was not based on fairness; it was based on effectiveness.” In other words, he buys wholesale into the campaign’s excuse that they needed to prepare for the inevitable onslaught of Republican dirty tricks. Wolffe spends an entire paragraph defending the ostentatious Greek-temple display of columns that the Democrats constructed for Obama’s anointment in Denver. And Obama’s utter lack of foreign policy experience? “In some ways the candidate possessed a thin Washington resume in foreign affairs,” he concedes. In some ways?

Still don’t believe that Wolffe is in the tank for Obama? Just take a look at the Acknowledgements. There, he thanks the “O-Team,” which consists of Michelle Obama, David Axelrod, Robert Gibbs, and a variety of other aides. First among his “surrogate family at MSNBC,” whom he applauds for “your talent and courage, your good humor and support,” is Keith Olbermann. (During the campaign, Wolffe made regular appearances on “Countdown,” playing Stepin Fechit to the bullying host.) He refers to Maureen Dowd as “our very own Dorothy Parker in red cowboy boots.” Wolffe has every right to thank whomever he wants. But let’s just say that political writers trying to avoid the accusation of partisanship are usually not this indiscreet.

Recounting an early discussion with Obama about whether he should write Renegade, Wolffe recalls his reservations about the project: “It’s very hard to write something after the election. Besides, I said, publishers want partisan screeds nowadays. They don’t want reporting.” Richard Wolffe gave his publishers what they wanted. If only he had followed his initial instinct and never written this embarrassing book.